Can we achieve something like a wartime transition to ventilator production, or will the response need to look different from this?
#covid-19

The manufacturing challenge of the coronavirus crisis would appear to be ventilators.

There are not enough medical ventilators in service to assist the number of COVID-19 sufferers likely to need them. The U.S. has only about 200,000 ventilators versus the nearly 1 million patients who might need this support. 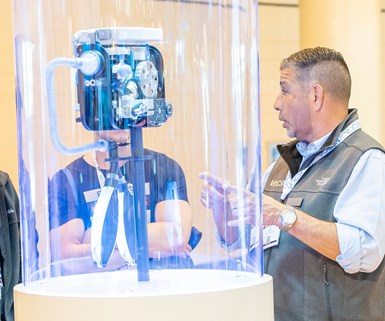 A view of a medical ventilator showing some of the manufactured components. Photo courtesy Ventec Life Systems.

The federal government intends to employ the Defense Production Act in response. This move would allow the government to compel manufacturers to produce needed suppliers, ventilators in particular. Major automakers have offered to divert their own manufacturing capabilities toward the need﻿.

However, ventilator manufacturers are doubtful production can really be ramped up that quickly.

What is the challenge of ventilator production? What form are the responses likely to take?

I don’t know ventilator manufacturing. The leaders of this company, for example, do — but they are too busy right now for me to expect to have a detailed conversation with them. Based solely on long experience reporting on manufacturing, here is my guess as to the critical issues:

1. The Challenge Is Process Rather Than Parts

Medical devices aimed at keeping a patient alive are manufactured according to certified process chains in which every link in the chain (every supplier) follows carefully defined steps interlinking with the steps other suppliers follow. Components and subassemblies are tested for their performance, not just dimensional specifications. That leads to point 2.

2. The Capacity Limitation Is People Rather Than Production

Quality managers who understand the characteristics and outputs that constitute a good part or good assembly as it relates to this product, and manufacturing engineers who oversee processes leading to these outcomes, would have to be involved in any process or plant that gets redirected toward expanding ventilator manufacturing. Which leads to point 3.

In World War II, the auto and appliance production lines converted to planes and tanks had time to convert — the war would go on. In this crisis, how much time do we really have? If it might take weeks to retool any single line or facility into ventilator manufacturing, the existing ventilator makers might make the grim choice that it’s best to push and strain their existing production processes, because this will at least crank out hundreds more ventilators rather than the zero extra that would be produced during retooling.

What Form The Response Is Likely to Take

Again, only my best guess:

1. For Non-Critical Parts, Manufacturing Can Be Farmed Out

Think of a ventilator’s outer housing, for example. In theory, just knowing the dimensional specs and tolerances of this part is enough to make it. Additive manufacturing will be part of the answer. The quantities needed for this emergency production land within the order of magnitude where 3D printers, particularly many of them at work at once, can be faster than conventional approaches — maybe. Then again, a motivated mold builder facing an emergency can create a tool ready for injection molding in much faster time than is typical.

The ventilator makers can’t afford to get lost in this choice. They can’t manage the logistics of crowdsourcing if many suppliers need to be involved. The ventilator maker needs to make the hard choice of which are the non-critical parts that can be farmed. Then, the answer for seeing to this production is liable to be a manufacturing network organization (think Xometry) or a large Tier-1 supplier already involved in medical devices (think Flex or Jabil).

2. For Critical Parts, the Question Becomes What Manufacturing Quality Controls Can Be Relaxed

Quality standards are not just overly cautious protections again fear of legal liability. Set aside for now any liability concerns over a faulty ventilator made during the crisis. The issue with quality standards is this: If the turn signal on my new car doesn’t work, I’ll get frustrated and take it back to the dealer. But if a ventilator doesn’t work, the entire medical community will get the message that ventilators can’t be trusted and will have to be attended to. Faulty ventilators could actually subtract healthcare capacity instead of adding to it.

However, to some extent — if we can assume the approval and protection of regulators during this unusual time — perhaps manufacturing quality measures ensuring a failure rate of 1 in 1 million could be relaxed to permit a rate of 1 in 10,000. These numbers are my own, not connected to anything I know about ventilator performance. But the chance to knowledgeably and accurately identify a permissible streamlining such as this, if it allows much faster manufacturing, might be the most valuable role a quality manager could play in increasing production capacity.

3. Obsolete Ventilators Can Be Brought Back into Use

This will also be an important part of the solution, and this part will be strongly local. Old, inoperative ventilators in hospital storerooms can be brought back out. The key is a technician who knows enough about that machine’s workings to know how to repair or retrofit it.

I hope those technicians are reading this. Hospital staff are not accustomed to directly commissioning manufacturing work. Perhaps now is the time — it is easy to do. Here is a map of industrial 3D printing service providers, hopefully including one near you. I am not saying one of these firms will certainly be the answer, but if what you need is a precise and quick replacement for a single broken or failing part, then 3D printing is likely the right avenue to explore first.