The Promise of Full Polymerization in Resin 3D Printing

Origin’s platform isn’t just another resin 3D printer based on digital light processing (DLP). Through hardware, software and material partnerships, the company is changing what is possible inside a photopolymerization printer.
#polymer

What happens when two software engineers, one from Apple and another from Google, develop a 3D printing platform?

A few very interesting things: 1) They focus first on software, and how to manipulate it to control the printer. 2) When it becomes necessary to build their own hardware, they develop a resin 3D printer that minimizes moving parts and offers even more software-driven control over conditions inside the print bed. 3) They identify materials as a bottleneck and opportunity for 3D printing, and partner with the largest chemical companies in the world to create new photopolymers. 4) They end up changing the very nature of resin-based 3D printing.

This, painted broadly, is the story of Origin. Based in San Francisco, the company is only about 5 years old, but in that time has honed its printing technology as well as its mission: to be a reliable 3D printing platform for repeatable production at scale, and change the way users think about polymer 3D printing in the process.

Origin’s founders, Chris Prucha and Joel Ong, are the aforementioned software engineers turned 3D printer developers. The initial concept for the company was to provide parts using open-source 3D printers already available on the market. But a challenging production job (manufacturing RFID apparel tags for athletic shoes endorsed by football player Marshawn Lynch) led to major tweaks to those third-party printers, and a desire to get deeper into manipulating the machines than even these open platforms would allow. That desire plus a short leap of faith led to the move from 3D printer user to 3D printer builder.

Chris Prucha (pictured) co-founded the business with Joel Ong on the premise that software could improve and advance polymer 3D printing.

With the idea of software-driven additive manufacturing in mind, Origin developed its own 3D printer that is as computer-controlled as possible with limited moving parts, utilizing a process the company refers to as Programmable Photopolymerization (P3). Rather than a laser that cures point by point, the printer uses a 4K digital light projector that cures an entire layer at once. The “backbone” of the machine is a servomotor that controls the movement of the arm holding the print platform precisely, monitoring the viscous force of the resin the entire time. Built-in infrared cameras and additional sensors help the user keep close tabs on what is happening inside the build chamber.

But it’s this last bit — what, precisely, is happening inside the build chamber — that is where Origin’s photopolymerization platform starts to look different from other resin 3D printers. Similar machines typically use oxygen, either actively or passively, as part of the curing process. This limits material choices to acrylate chemistries, Prucha says, which tend toward short polymeric chains and therefore brittleness. Origin’s 3D printer in contrast does not rely on the use of oxygen, which opens new material possibilities. 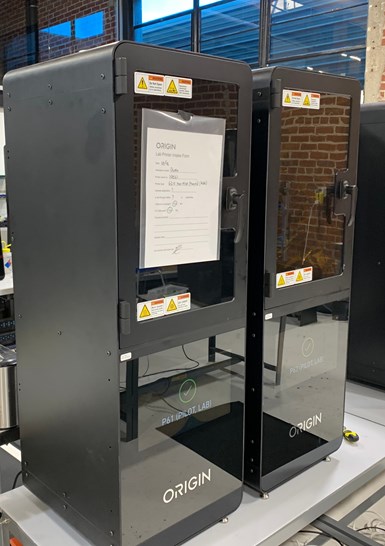 The Origin One resin 3D printer began shipping to customers in October 2019. Origin provides the machine to customers on a 3-year lease.

But that isn’t all. In addition to changing one of the mechanisms of resin-based 3D printing, Origin has also opened more controllable parameters. There are more knobs to turn on this printer, so to speak. One is exposure time, the length of time that a layer of resin is exposed to the curing effect of the light projector. As Steve Kranz, senior scientist, explains, there’s been a tendency to focus on pixels as an indicator of precision for 3D printing, but pixels are a fixed measurement. Origin has found that the exposure time actually has a greater influence on dimensional accuracy; too short an exposure time and the layer will be too small, but too long and it will deform beyond its desired dimensions. Origin’s platform allows users not only to control the exposure time down to the hundredth of a second, but to alter it layer by layer if desired.

Temperature is also adjustable, and can be controlled at three levels: the build chamber (which heats to 60°C), the material reservoir, and at the interface where the chemical reaction takes place. Temperature, atmosphere and humidity are all monitored with sensors to enable manual control now, in the hope that soon they will be adjusted on the fly by software.

All of this adds up to “a 3D printer that works like a chemical reactor,” as Prucha puts it, and that’s a clue as to how the printer builder approaches materials. Origin has partnered with some of the largest reactive chemical companies in the world — BASF, DSM and Henkel, to name a few — not for the purpose of creating locked-down, proprietary materials or tweaking existing ones, but instead to develop new photopolymers optimized for 3D printing. Partners use Origin printers to develop and dial-in material properties, and then Origin tests the resin in-house to finesse aesthetics, print time and pigment if necessary (which can affect resolution and cure depth). Finalized materials can then be produced in batches by the material partner.

“Existing plastics were not designed for AM,” Prucha says. “Photopolymers are expensive, they’re brittle, they shrink, but if you can control the chemistry in the system, you can control the properties.” And the ability to use that control in the pursuit of new and better materials is one of the key promises Origin is making.

A recently launched material provides an illustration of how that promise plays out. At Formnext 2019, Origin and Henkel jointly introduced Loctite 3955, a new photopolymer with fire, smoke and toxicity (FST) resistance. While most photopolymer resins are liquid at room temperature, this material is solid; in order to print with Loctite 3955, the solid stock must first be brought to its melting point. Henkel’s FST photopolymer is not restricted to Origin’s platform, but Origin’s printer can use this material because of its ability to achieve, monitor and maintain the necessary temperature during the 3D printing process.

Material freedom is not limited to material suppliers, either. While Origin originally planned for two different printer lines, one for materials development and another focused on production, the company has since streamlined its offerings in recognition of the fact that customers may want the same flexibility to experiment with materials that a supplier partner might need. The Origin One supports either application.

The level of control possible through Origin’s P3 process is allowing the company to build parts more repeatably, work more closely with material suppliers, and introduce new print profiles for its platform. But there is something else happening under the surface of each part.

Currently, most parts made with resin 3D printers require a post-print cure to fully set their material properties. Depending on the system and material, that cure might take place in a UV or LED light-curing system, or in an oven. A part might only be 50 or 60% polymerized when it leaves the printer, which means there are opportunities for warping and deformation in the cleaning and curing steps. There is also a danger that the cure won’t fully polymerize the material; if exposed to sunlight or other UV light source in use, that part will continue curing and could crack later in its lifecycle.

The goal is to reach a point where the post-cure isn’t needed at all. Already, the company says it is achieving approximately 99% polymerization in the print process.

Origin’s goal is to reach a point where the post-cure isn’t needed at all, because the resin has been fully polymerized within the printer, during the printing process. That goal is close; already, the company says it is achieving approximately 99% polymerization on prints in the Origin One. “The UV post-cure we do now is really just for surface finish,” Prucha says.

If this goal is realized, it will mean more than just removing a piece of equipment and a step from the additive manufacturing process. Prints will be that much closer to usable parts, that much faster. But polymerization achieved within the printer offers a more fundamental advantage: The fewer steps there are in the manufacturing process, the more securely a part’s quality can be guaranteed. This reliability will be necessary for 3D printing plastics at scale, and will mean a faster path to validation for the parts that will be made this way.