Production-oriented polymer AM machine uses the same platform with the same range of controls originally conceived for material development.
#polymer

Origin’s material-development platform is now a production 3D printer. The company’s Origin One machine for additive manufacturing (AM) of polymer parts via Progammable Photopolymerization (the company’s term) begins shipping to users this month. And the company says supplying machines is the way it intends to make its money.

That makes Origin distinctive. Not every equipment provider in AM pursues revenue in this way. For some, supplying material is part of the income stream as well. In its approach to supplying the needs of production AM applications, Origin’s aims thus look more like those of a traditional manufacturing hardware supplier such as a machine tool builder or injection molding machine maker. Namely, provide the machine with no ongoing role to play in the materials it will be used to run. Origin’s leaders say they expect enough activity in AM for production for the scale of machine sales alone to be lucrative. They just need their platform to be a preferred choice for production applications, and for this to happen, they say, they need it to be a preferred platform for developing materials — because the scope and possibilities of production applications in AM will be determined most of all by the material options available.

During a visit to Origin’s headquarters in San Francisco, California, I spoke about this with company co-founder Chris Prucha and senior vice president Charlie Vestner. To develop a machine for production, the company first developed a machine for material developers, with a decidedly digital approach.

“We are software engineers,” says Prucha, not only accounting for his, Vestner’s and others’ backgrounds within the company, but also emphasizing the important point about “programmable” in the term Programmable Photopolymerization. ​​​​ From the ground up, the system was designed to provide software control over humidity, light exposure, material temperature, chamber temperature, reaction temperature and “any other variable we discovered was important to chemists creating materials,” Prucha says. The software control and the range of variables subject to this control aim to make it easy for third-party chemists to develop materials for the printer, to develop processes on the printer for running materials that already exist, or even potentially to more completely produce the part via 3D printing. Companies including BASF and Henkel have developed materials and process parameter recipes for use on this platform, sometimes working in partnership with Origin, sometimes on their own. 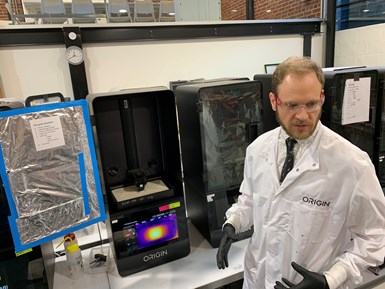 Experimentation on the day of my visit focused on tuning light exposure in search of finer precision. Origin’s Steve Kranz oversees this research. The color display maps exposure times.

Now the same system is going forward as a production 3D printer, with scale manufacturing in mind.

To illustrate how the company thought about this, Vestner briefly leaves software aside to talk about a piece of hardware: the machine’s build tray. This tray was designed as a durable metal frame with the build surface in the form of a removable plastic sheet. Only the sheet must be replaced — not the entire tray — and these sheets are so inexpensive that Origin can supply the customer with a lengthy supply of them. A small feature, but it demonstrates the company’s expectation that a user might simply run the machine in production without any ongoing interaction with the machine’s OEM. 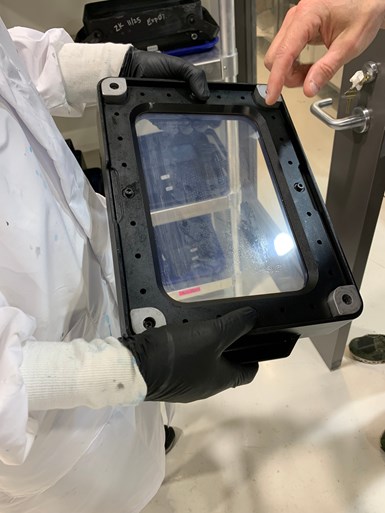 Build trays are designed so they don’t have to be discarded. The frame is reusable. Only the plastic sheet becomes overused and needs to be changed out.

Software control over process parameters remains unchanged, and has direct application to production. I saw an example of this being explored during my visit. Origin has discovered that light exposure time has a direct effect on the dimensions of the solid polymer form, and in some materials this effect is repeatable. Experimenting with slight changes in exposure time in the range of 4 to 6 seconds, researchers note the corresponding changes in feature size on the order of single microns. Within the standard parameters for a build, the pixel size of photopolymerization is selectable among 50, 75 or 100 microns — and this should have been the limit of precision. However, Origin is now finding that exposure time provides an even finer knob with which to tune, attaining finer levels of dimensional accuracy as measured against the STL file. Hard-wired machine and process parameters would make it difficult to realize effects such as this, but software control over parameters opens the way to discovering this sort of tweakable improvement to process performance. 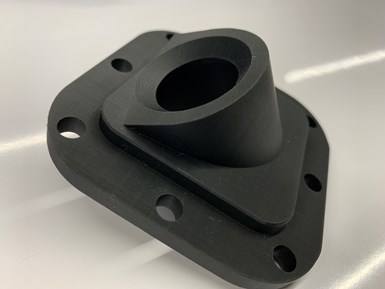 3D printer makers make parts for their own printers, and Origin is no exception. This camera housing is a production component the company makes using its own process. The black ABS part is printed at the rate of 40 parts per build in an 8-hour build for a total unit cost of $6.41. The company offers a cost comparison with other processes.

It also opens the way to consistent performance, Prucha says – fully recognizing that the machines likely will be used in settings that are not consistent at all. “The goal for big manufacturers is globally distributed production using a single material,” he says. But different locations will have different humidity levels and other different environmental effects. “You don’t want to have to revalidate the material at every location.” Software control over the parameters affecting the material means this is not needed. The necessary conditions for the material are all being measured and maintained within the system, compensating for whatever local effect the environment might have, assuring the same parts are produced to the same material properties wherever production is performed.