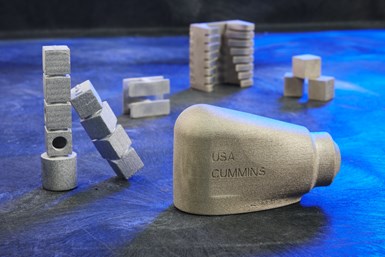 The lance tip adapter is a critical emissions component in Cummins engines as it atomizes and injects diesel exhaust fluid into the engine exhaust stream to reduce the amount of nitrogen oxides (NOx) emitted from Cummins’ engine systems. The part is now moving through Cummins’ production part approval process. The company hopes to have final part approval and start official production later this year.

“We’re on the cusp of being able to leverage a broad range of additive technologies to print the parts we need, using the right technology and at lower costs and increased speeds,” says Tim Millwood, vice president of global manufacturing.

Producing this part through AM provides several additional benefits, including a lighter weight design, improved geometry for fluid and air flow, and the elimination of the added complexity of cross drillings. It also has environmental benefits. Unlike traditional machining, the binder jet printer can take nearly 100% of the leftover powder from the printed part, recirculate it through the system and reuse it in the production of other parts.

In April 2019, Cummins announced its investment in binder jet technology, where a printhead moves across a bed of powdered metal and selectively deposits a liquid binding agent in the shape of the part cross section, bonding these areas together to form a solid part one layer at a time. Depending on the complexity of the part, the technology can print 60 to 100 times faster than other laser-based printing processes, enabling high-volume production with this technology, the company says.

The Cummins AM and Engineering teams are also working on designing and printing several additional concept parts, with the hopes of finalizing more parts yet this year.