A veterinary study on the use of 3D printed titanium cranial plates for dogs has established a workflow for creating these custom devices in less than 3 weeks.
#metal #implants

“The more complex the reconstruction, the more of an artist I need to be in surgery,” says Dr. Michelle Oblak, veterinary surgical oncologist and associate professor at the University of Guelph’s Ontario Veterinary College. As a surgeon, Oblak treats pets with cancerous conditions such as cranial tumors, but as a researcher, she is fascinated with transitional technologies — techniques that can benefit animals today and potentially humans in the future.

Cranioplasty, or reconstructive surgery to correct a defect in the skull, is one area where veterinary surgical techniques are evolving. A decade ago the most common treatment for a dog with a cranial tumor would have been to remove the tumor and affected area of the skull and to simply close the area with a skin flap, leaving the patient vulnerable to future injury. More recently veterinary surgeons have adopted the same titanium mesh used for human cranioplasties; the material provides much better protection and stability to the affected area, but is costly and must be molded to the size and natural shape of the patient’s skull in surgery. In both cases, the stability and aesthetics of the final outcome largely depend on the surgeon’s manual skill, made all the more challenging when patients vary widely by breed, shape and size. 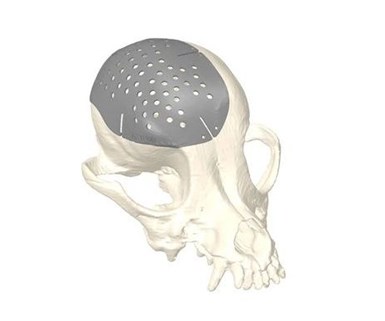 Oblak and a team at the Ontario Veterinary College collaborated with the Additive Design in Surgical Solutions (ADEISS) Center in nearby London, Ontario, on a paper recently published in the peer-reviewed journal BMC Veterinary Research. This feasibility study explores the logistics of manufacturing custom 3D printed titanium implants as an alternative to conventional treatments, and one that can bring the artistry out of the operating room by applying it digitally in the planning and design phase instead.

Metal 3D printing, powder bed fusion (PBF) in particular, has become an accepted method for manufacturing medical implants for a number of reasons. Design strategies such as lattices made possible via 3D printing can help facilitate bone ingrowth and healing, while the rough surface finish common to PBF prints can actually encourage that ingrowth. The digital nature of the process makes it easy to produce implants in a variety of shapes and sizes, even custom to a patient’s specific anatomy and needs. By reducing the manual manipulation of an implant in the operating room, these tailored implants have the potential to significantly simplify and speed surgeries.

But despite these benefits, custom 3D printed implants also pose some challenges in terms of cost and time. Oblak and her fellow researchers surveyed previous studies of custom 3D printed devices used in veterinary surgeries and found that most took more than 4 weeks from CT or MRI scan to final implant. With this lead time in mind, the team developed and proved out a workflow for custom titanium 3D printed implants that can be produced within just 3 weeks of a patient’s diagnostic scan.

A Streamlined Workflow for Custom Implants

Oblak and her colleagues used existing scan data from three dogs previously treated for cranial tumors to establish a workflow with the ADEISS Center, a metal 3D printing service provider with a focus on medical devices. The CT imaging data for each patient was first imported into a Digital Imaging and Communications in Medicine (DICOM) viewer so that a veterinary radiologist and surgical oncologist could collaborate to plan the hypothetical reconstructive surgery. The resulting image (showing the skull with the planned defect, or area to be removed via surgery) was then exported as CSV.

The ADEISS Center was able to take the CSV data and plug it into Adept, a software package from Renishaw. Adept is a specialized tool for designing 3D printed craniomaxillofacial implants. Although intended for human implants, Adept nevertheless proved to be a streamlined platform for creating cranial plates for the canine patients. In each case an ADEISS engineer worked with a surgical oncologist to design a cranial plate that would fit precisely over the planned defect. The median time to create each plate was just 15 minutes; the total time for surgical planning and plate design was within 2 hours for each of the three cases examined.

For each patient in the study, researchers drew on existing CT data (A) to plan a hypothetical surgery to remove a cranial tumor (B,C). Additive manufacturing company ADEISS used the resulting model to develop a custom 3D printable implant in Adept (D). Images: James et al.

“Essentially you plug in the skull with the defect in place already, and you click a few buttons to create your plate thickness, hole size, overlap and contour,” Oblak says. “We have done the same work in other CAD programs and it is doable, but with this specialized software it’s a 15-minute process versus probably a two-and-a-half hour process just for implant design.”

Once designed, ADEISS imported the plate file into Renishaw’s QuantAM additive manufacturing software for support structure design and build planning. The company then 3D printed the plates using a Renishaw AM400 PBF metal 3D printing system in medical-grade titanium (Ti-6Al-4V). The completed plates were heat treated, finished and ultrasonically cleaned before being shipped to the surgical facility for sterilization. The entire process from CT scan to implant was completed in less than 3 weeks.

While the 3D printing technology itself was critical to delivering the devices quickly, Oblak also credits the collaboration with ADEISS as a contributing factor to the study’s success. Although canine implants aren’t subject to the same regulation as human implants are, not every additive manufacturer is equipped to handle a medical-grade device. ADEISS’s focus on medical applications means that it can perform all the necessary steps for manufacturing a cranial plate like this under one roof, saving time that might otherwise be spent transferring the part between service providers.

The workflow established in this feasibility study could help promote greater adoption of 3D printing for veterinary devices, plus better, faster surgeries with custom implants. “After you’ve just spent two hours in surgery removing a tumor, it’s an advantage to be able to take that implant and know that it’s going to fit,” Oblak says. “The process takes minutes rather than an extra hour in the operating room. It’s better for me as a surgeon and it’s better for the patient.”

The workflow established by the feasibility study takes less than 3 weeks from CT scan to custom implant.

Better Outcomes — for Animals and Humans

While these initial titanium plates were produced as a test based on the anatomy of dogs who had already received conventional implants, the study was predicated on the success of a 2018 reconstructive surgery believed to be the first North American use of a custom cranial implant for a canine patient, a Dachshund named Patches.

A tumor on the top of Patches’ head necessitated the removal of about 70% of the top of her skull; replacing such a large area with titanium mesh would have made for a challenging surgery that might have left Patches vulnerable to future brain injury. Dr. Galina Hayes, a small-animal surgeon at Cornell University, reached out to Oblak to see if 3D printing could provide a solution. Using a workflow similar to the one outlined above, Oblak and Hayes collaborated with ADEISS to have a custom titanium plate made for Patches. They also relied on 3D printing to create a model of the dog’s skull for surgical planning, and a cutting guide to simplify the procedure. Learn more about Patches’ case in the video below:

Custom 3D printed implants remain the exception rather than the rule as a result of cost, workflow challenges and approval difficulties; that much is true for both veterinary and human medicine. But more success cases in animals could help accelerate the adoption of this methodology in people as well.

“I think sometimes the human medical field underestimates what collaborations with the veterinary field can provide,” Oblak says. “We understand that we have an opportunity to do some really innovative work to benefit pets, but we can also contribute to the human medical community as well, where regulatory issues can sometimes take years to sort out. While waiting on these regulations, we can start using the technology and help to improve and refine techniques in a clinical environment. When it does move into the human space, we’ll have experience and expertise to share.”

If you would like to get in touch with Oblak to discuss medical and surgical applications of 3D printing in veterinary medicine, reach her by email or at 3dvetmed.org. More information on ADEISS available at adeiss.ca.