Velo3D: Avoiding Support Structures Means Metal AM Can Be a Solution for Direct Part Replacement 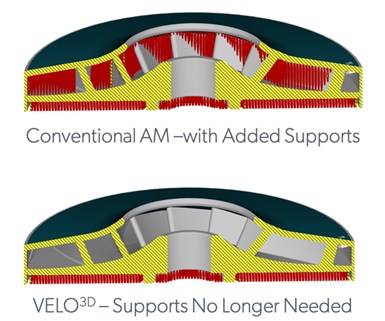 This graphic from Velo3D illustrates the challenge. An impeller is an example of a part design that might not be producible additively without major modifications to the design to facilitate support structure removal. Velo3D’s idea is that reduced need for supports will make more parts directly transferable to AM.

Metal additive manufacturing (AM) technology today too often requires the user to both design a new part and master a new process in order to implement AM effectively. That is too much, says Benny Buller, CEO of Velo3D. The need to accomplish all of this simultaneously represents a high hurdle that stands in the way of AM adoption. Instead, he says, “We want to offer additive manufacturing for direct part replacement.” Or direct assembly replacement in cases where a single 3D printed part replaces several components previously fastened together. In either case, he says, no redesign of the form of the component should be needed to make it producible via AM, because AM becomes much easier to use when this requirement is taken away. I recently spoke with him about this.

Support structures are the major factor. When a part is designed or redesigned for AM, the designer either omits overhangs that might droop during the additive build or, when this is impossible, adds in support structures to buttress those features. Adding supports might also entail redesigning the part to offer access to those features so they can be removed later via machining or manual postprocessing. A big part of what we think of as design for additive manufacturing (DFAM) is really design of and for support structures, and the impossibility of removing supports from many parts (because of inaccessible features) is why many existing part designs are not transferable to AM. 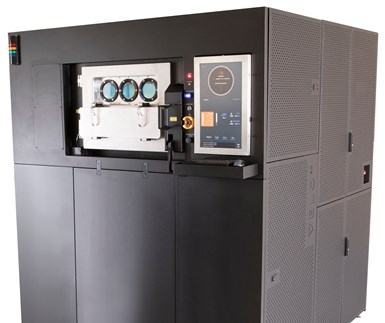 The Velo3D system is not just its machine, seen here. Control and software tools such as simulation, closed-loop meltpool control and feature-specific processing enable unsupported building of overhanging features and anticipation of part distortion or build failure.

Velo3D's “SupportFree” system is about making these designs transferable, he says. The system is the sum of various capabilities of the company’s metal AM system that together allow unsupported overhanging features to print effectively despite their overhang. Process simulation, closed-loop meltpool control, a non-contact recoater and feature-specific processing — meaning different parameters for different regions of the build — all figure in to allow reliable builds of non-DFAM parts with few or no support structures.

Another need for making metal AM more accessible is the reduction of the trial-and-error learning curve for realizing an effective and repeatable process. Much of this learning curve is aimed at finding a combination of process parameters than minimizes the incidence of part distortion or build failure. Velo3D’s system aims to control against these errors. “We learned the only way to control is to have metrology everywhere,” Buller says. The company’s years-long development process before its launch consisted in large part of failure modes and effects analysis (FMEA) aimed at identifying and characterizing parameters and variables that could suggest or lead to the build trending out of its window of control. The sensing and systems engineered around these parameters and variables results in an AM machine that “at every layer asks, ‘Am I still in control?’” he says. 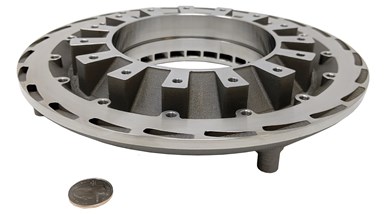 Hidden inside this power generation component are labyrinthine gas-flow passages that seemingly would have ruled out additive manufacturing. The support structures for building these passages would have been impossible to remove after the build was done. 3D printing free of support structures made this part possible.

A recent success illustrates how this might play out in practical terms. KW Micro Power, a company working to develop a compact power generation system, had been stymied in trying to manufacture one of the key components of its design: a titanium disc roughly 10 inches in diameter containing a labyrinth of passages for gas flow. The form of the passages seemingly called for support structures, but support removal would have been impossible because of the passages’ inaccessibility. The combination of the build control and the SupportFree system enabled KW not only to additively build its design without supports, but also to print it accurately on the first try.