The excavator demonstration at the ConExpo-Con/Agg trade show in Las Vegas two years ago was nothing to write home about. Not for casual observers, who watched the machine operator aimlessly scoop and dump dry dirt like a kid in a sandbox.

But for those in the know, or for anyone who read the nearby purple banners trumpeting “The World’s First 3D-Printed Excavator,” the experience was something altogether different. And for the representatives in attendance from Lincoln Electric, the 125-year-old year old global manufacturer of welding equipment that helped 3D print the excavator’s 400-pound, 7-foot arm, the moment was bigger still.

To them, the demonstration was, they hoped, the birth of a new mainstream economic sector: large-scale robotic metal 3D printing.

Robotic metal 3D printing and large format metal additive manufacturing are general descriptors of the method used to print the excavator arm. Yet these phrases leave a lot to the imagination. A more precise description? Wire arc additive manufacturing, a process that combines automated metal inert gas (MIG) welding or laser hot wire welding with direct deposition 3D printing. Picture an industrial robot arm fitted with a welding torch depositing bead layers of melted wire feedstock onto a multi-axis turntable, and you’ll have the general idea. It is not, as we’ll see shortly, a simple adaptation of automated welding. Not exactly.

An example of a part printed via wire arc additive manufacturing. Contrast the surface finish of the bead layering process versus the finish along the top of the part.

This description feels right based on my visit to the “startup” last fall.. Located just three miles from Lincoln Electric’s headquarters near Cleveland, the new Additive Solutions building featured six production cells that occupied roughly a quarter of the massive 75,000 square-foot space. Several additional cells have been added since my visit, with plans to expand to more than 20 robotic 3D printing cells by the end of 2020 — all of them printing production parts and prototypes.

For Lincoln Electric Additive Solutions, the key opportunity resides in the word “large” — casually defined by Mark Douglass as any part larger than a kitchen microwave. More significantly, anything larger than a part capable of being printed in a metal powder bed fusion machine.

A prime example of this is aerospace tooling for composites. L﻿arge, asymmetrical facesheet tools often take months to manufacture, not only because of the availability of raw materials such as Invar, but also because facesheet tools require significant amounts of time to fabricate and machine on CNC machines large enough to handle them.

A complete 3D-printed facesheet, prior to finish machining.

If forming shapes via melted wire feedstock sounds relatively straightforward, make no mistake: Printing a 6-foot-tall, curved steel plate via wire-arc additive manufacturing is a highly complex process to manage. And even if the nonstop eight-day-long print is successful, the resulting 900-pound monolithic part will require finish machining.

The 3D-printed facesheet after finish machining.

With the launch of Additive Solutions, Lincoln Electric is combining its decades-long welding expertise and innovations in automation, CNC software, and materials into a venture that utilizes all of these technologies simultaneously. Until recently, missing from the puzzle was the ability to post-process these extremely large parts — especially the ability to finish machine parts that required massive machining centers. That changed this past April — the same month Additive Solutions launched — when the company purchased Baker Industries. As readers of our sister publication Modern Machine Shop may know, Baker Industries owns and operates one of the largest machining centers in the United States.

Lincoln Electric’s wire arc-additive manufacturing process is a tightly choreographed dance between the torch, the robot, the part and a multi-axis, rotating turntable that holds the build plate. The ability to use gravity to your advantage and eliminate the need for support structures though the coordinating of these components is what Douglass calls the “holy grail” of Additive Solutions’ process: Rotate, print. Turn, tilt, rotate, print again. Repeat as necessary.

Suddenly there’s no need to slice the CAD strictly along the X-Y axis; it can and should be sliced along any orientation that makes sense for the part. This requires coordination of the slicing software with the robot’s automation system, as well as the ability to control a cascade of variables, including the characterization of geometric features and material properties, heat management and a finish machining approach.

When Additive Solutions opened its doors earlier this year, these were “known unknowns.” The excavator arm demonstrated in Las Vegas in 2017 was a collaborative project that involved several companies and associations, predominantly led by the Oak Ridge National Laboratory, which worked with Lincoln Electric to develop processes and solutions as challenges arose during the manufacture of the demo part. 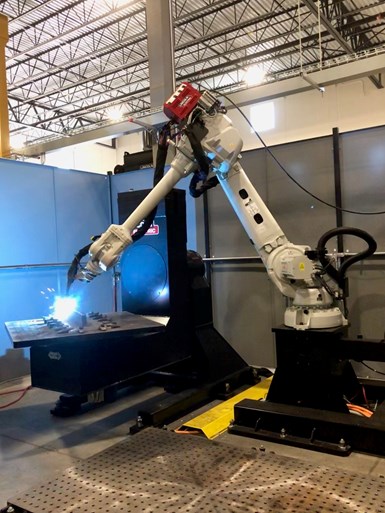 A Cycle of Abuse

During my visit to Additive Solutions earlier this summer, I saw the company’s first printed metal facesheet for aerospace tooling. The part was 4 feet tall by 5 feet long with widths that varied between 1 inch to several inches from top to bottom. The eight days of straight printing included stoppage time to change nozzles and allow certain areas of the part to cool between layers.

Typical operations in an automated welding cell involve multiple short welds. The individual welds may last for a few seconds before they turn off, allowing the robot to reposition and begin again. The total time that the arc is turned on relative to the entire production cycle is only a few minutes.

“Now we have these torches and the robot and positioners and all these other peripheral components like water lines and coolant,” Douglass says. “The whole ecosystem is more than just having a laser source or an arc source and wire. And having those things turned on virtually 100 percent of the time for days on end… The duty cycle on these things is abusive.”

Dave Sterio, director of Additive Solutions, says that one of the biggest challenges of this technology is not only controlling thermal stress, but making sure the equipment survives the build process. “The ability of those pieces of equipment to withstand the stress of welding for hundreds of hours straight is key,” he says. “Printing the facesheet over eight days, 24/7, taught us a lot. We would go home at eight o'clock at night, come in at six in the morning and assess where we were. Over the course of that time we made numerous improvements just from monitoring that single build.”

Integrating what the Additive Solutions team learned from its initial builds into the SculptPrint software represents a large part of the work that took place during the first few months of operation. Deposition rate, bead spacing, current and voltage levels, wire feed speed, torch angle and travel speed are interactive variables. Trial-and-error experiments with different calibrations across these variables are documented, with successful settings being continuously integrated into the system.

In a case study co-written by ORNL and Lincoln Electric researchers about the 3D-printed excavator arm, the authors discuss key challenges they encountered during the build process. Notably, they point to the types of melted beads, and the overlap between them, as being central to the success of the project and the process.

“Unlike polymer deposition, metal AM allows and requires bead-to-bead and layer-to-layer re-melting to build structures of adequate mechanical strength that are free of voids and crack initiation artifacts,” the paper reads. “A key factor is the choice of proper bead-to-bead overlap and layer heights.” Robot arm speed, wire feed rate, nominal thermal conditions, the part’s wall structure, and the average layer height were considered to be basic building blocks of printing arbitrary shapes.

A view of one section of the new Additive Solutions facility. Behind this sits additional space that will house several additional 3D printing robotic cells.

Heat management is significantly important to wire arc AM technologies. Inter-pass temperatures for steel are optimally controlled at 300°C, with higher temperatures potentially resulting in overhang features, and lower temperatures potentially producing brittleness, poor bead-to-bead remelting and voids within the part. The arc process, output voltage and current from the power supply — notably, all areas of expertise contained within Additive Solutions’ parent company — are key variables for success. This is why Douglass is so optimistic about the future.

“I don't see anybody else in this industry that has that amount of knowledge and control over all the components necessary to get additive to work,” Douglass says. “Are we machine builders? Yes. Are we feedstock manufacturers? Yes. We have a proprietary software and decades of process knowledge. And with Baker Industries we have machining and part assembly capabilities. You can see the world is moving towards the 3D manufacturing, and everything points to the fact that we should be in this business. So let's do it.”