After a 20-day outdoor cure, workers tilt a concrete-filled, 3D-printed machine tool base 90 degrees before transporting it inside ORNL’s Machine Demonstration Facility.

Listening to politicians and political junkies argue about how to “bring back manufacturing” to America has become an election year tradition as American as apple pie. The rhetoric varies wildly but the goals typically align: Strengthen our industrial supply chain, create jobs and increase national security.

Meanwhile in laboratories far away, scientists and engineers representing both public and private enterprise are working to restore and stabilize manufacturing dominance in the United States. The aim is not to solve U.S. supply chain issues or lobby for specific pieces of legislation, but to accelerate the identification of problems with our existing domestic machine tool industry. In other words, regain a competitive advantage using tools and technologies we have at our disposal, right here and now.

I recently wrote for Modern Machine Shop about an initiative being advanced through ORNL that is meant to increase throughput of the United States’ existing base of CNC machine tools. But at Oak Ridge’s Manufacturing Demonstration Facility, the core technology that scientists are working to advance is additive manufacturing (AM).

Both this publication and Modern Machine Shop have written extensively about how CNC machining and additive manufacturing are growing closer each day — most often through the use of 3D-printed tooling that can greatly reduce lead times and costs, especially for the manufacture of low-volume, high-value parts. Oak Ridge scientists’ latest experiment, though — a self-described “moonshot” that is just getting off the ground — is aimed much higher than 3D-printed jigs and fixtures.

Its goal? To 3D print the machine tool itself — or at least its largest component, the base.

Standing inside the Cincinnati Inc. BAAM machine next to the 3D-printed machine tool base mold at the Oak Ridge National Laboratory.

Before we get to what the ORNL team is doing and why the Department of Energy might be interested in 3D printing a CNC machine tool, we need to learn just one more acronym: ACE.

ACE stands for America’s Cutting Edge, a program that represents a new collaboration between the DOE and the DOD’s Industrial Base Analysis and Sustainment Program. ACE consists of a suite of projects that serve as a collective response to the decline of U.S. machine tool capacity over the past several decades — a phenomenon that the DOD views as a threat to national security. The decline can be seen in the United States’ dwindling share of the machine tool global market (down to 6.2% in 2010 from a high of 23.2% in 1998) and the discrepancy between U.S. import spending on machine tools ($8.6 billion in 2018) and export sales ($4.2 million).

According to Tony Schmitz, a professor at the University of Tennessee Knoxville and joint faculty member at ORNL, when the ACE program kicked off, several industry partners — the DOD’s industrial policy office, the Industrial Base Analysis and Sustainment program, ORNL, the Institute for Advanced Composites Manufacturing Innovation, and the University of Tennessee Knoxville — convened to explore the idea of using Oak Ridge’s large format polymer printing capabilities to produce molds for concrete machine tool bases.

The reason is straightforward: Most machine tools have cast components, and the U.S. casting infrastructure to support those needs has dropped significantly in recent decades. Schmitz says that in 1987, for example, there were 774 cast iron facilities in the U.S. That number has dropped to less than half, or 330, in recent years. And among these remaining facilities, Schmitz says, many don't have the size and scale to produce castings for large scale machine tools. The outcome has been a widespread turn to foreign sources for large machine castings.

The ACE team believes that reshoring machine tool base production will offer several advantages: growing the U.S. economy and manufacturing workforce, supporting DoD needs, and shortening the supply chain and the travel distance between the large casting producer and the machine tool OEM. Based on Oak Ridge’s experience with large format polymer 3D printing, it believes that a concrete-filled 3D-printed polymer mold can offer a superior alternative to traditional metal castings.

The machine that the team is creating is actually a hybrid machine tool — a combination of a three-axis vertical CNC machining center and wire arc 3D printer with a work volume that puts it squarely in the mid-sized range of typical VMCs. The 3D-printed mold for the machine’s base, however, is massive: 156 inches by 78 inches by 96 inches, all printed at Oak Ridge with Cincinnati Inc.’s BAAM system, using 20% carbon fiber ABS pellets melted and extruded for deposition in multiple layers. The mold had to robust enough to withstand the pressure that was introduced next: relocating outdoors and filling the plastic mold with 15,000 pounds of concrete.

A custom rebar structure was lowered inside the 3D-printed mold. Sensors were affixed to the rebar before the concrete pour began.

The Stress Has Been Awesome

ORNL poured concrete into the mold in September. Once the mold had been positioned outside, the team lowered a rebar structure that had been prefabricated to fit its interior dimensions. This rebar structure served not only as strength reinforcement, but also as a staging area for several sensing units that included temperature loggers and three-axis accelerometers.

The concrete pouring process outside the Machine Demonstration Facility at ORNL.

As concrete filled the empty cavity over the course of 30 minutes, it embedded several sensors into the base that could be be accessed with a wire feed located outside the machine. While the engineers calculated the expected pressure inside the mold to be 3.8 megapascal, they designed the structure to withstand a yield strength of 16.4 megapascal in the vertical direction — the layer direction of the print that represents the lowest strength of the design. 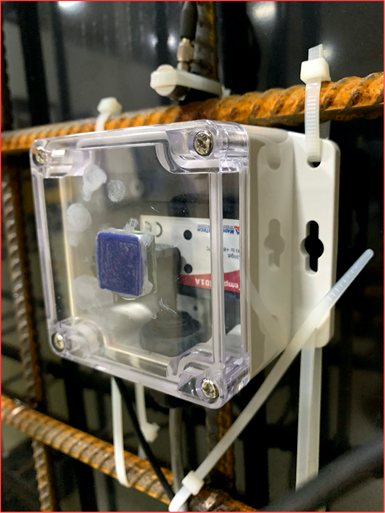 An accelerometer attached to the rebar structure before the concrete pour began.

After the pour was finished, the unit remained outside as the cure proceeded. Sensors tracked an internal temperature rise to 150° F — a temperature not caused by the summer Tennessee heat, but rather the exothermic reaction as the concrete began curing. The mold stayed outside for the next 20 days.

When the concrete had completely cured, the entire unit was flipped 90 degrees and transported inside the Manufacturing Demonstration Facility. The next set of tests would take advantage of the accelerometers embedded withing the concrete base. 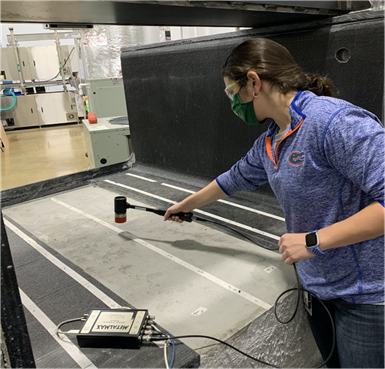 An ORNL employee performs a tap test on the concrete base of the machine tool.

Engineers performed an impact test on the area where the machine’s table would be positioned, in order to measure the structural dynamics prior to installation of the controller. Later, when the machine is finished, these natural frequencies, modal stiffness values and damping ratios will influence the machine's performance, while the embedded sensors will help monitor its vibration and inform overall speed-and-feed selections. But the next steps — coming soon — will be to install the welding torch (which will be used in the wire-arc AM process) and the milling spindle.

When all of that’s finished, and when the system is integrated with a CNC, the moonshot will have landed.

The hybrid 3D-printer and VMC in its latest phase. Next, the spindle and welding torch for the wire arc AM process will be added.

But already, at least one stark contrast between a traditional machine tool base and the 3D-printed/concrete machine tool base has already been identified. Concrete costs roughly $100 per cubic yard, or 2.5 cents per pound. While the cost of cast iron will always be a sliding scale that depends on the part size, complexity and quality, Schmitz says that the typical cost is between 75 cents and $2.50 per pound for castings that travel from Asia to the U.S. Even when one considers the cost of the 3D-printed mold material at $6 per pound, the ability to reuse and recycle that material will still allow massive cost savings using 3D-printed molds and concrete. These considerations are all part of the overall benefits that the ACE team envisions for the project.

“We try to do a moonshot within the Manufacturing Demonstration Facility typically typically aligned with IMTS,” Schmitz says. “And what it does is it really stretches the minds and the imagination of the researchers working side by side with industry to see if we can kind of go beyond what are considered the boundaries. This is just an example of that sort of thing.”

Dr. Lonnie Love, group leader of ORNL’s Manufacturing Systems Research Group, says that the seemingly impossible nature of these moonshot projects pushes the group further than otherwise possible. “The stress has been absolutely awesome,” he says. “You know, for this project already we developed new materials, new processes, new controls, all in a very short period of time. And the end result wasn't that we solved all the problems. But it accelerates our identification of the real problems we need to understand.”