The online store utilizes open capacity at its sister 3D printer farms for on-demand production with no startup costs, allowing designers to sell physical products as easily as digital ones.
#supplychain #polymer

Launching a product takes time, manufacturing expertise and an investment in capital equipment. That is, unless you launch it through Angled.io, a new company that not only sells independently created products, but also 3D prints and ships those products from one of several 3D printer farms. Photo Credits: Angled.io | Slant3D

Gabe Bentz has a vision: rapidly scalable production 3D printing that allows anyone, anywhere in the world to launch a product. His new venture, Angled.io, is designed to bring physical goods into the world with the same ease as adding a new smartphone app to the App Store or listing an ebook on Amazon.

Just about anyone — businesses, inventors, YouTubers — can create a 3D printable product to be listed in the online Angled store. When an order is placed, the item is manufactured at one of the 3D printer farms operated by Angled’s sister company Slant3D and shipped directly to the buyer. The creator earns a royalty for each sale and in return, there is no startup cost, no hard tooling to source, not even any inventory to manage.

“It completely democratizes manufacturing,” Bentz says. “You don’t have the financial risk. There’s no minimum order. The kid in the dorm room can upload a model one night and then in a couple of weeks have sold it to a million people around the world. If we are successful, it really will make hardware exactly equivalent to software.”

3D Printer Farms as a Path to Scale

Bentz’s mission to remove barriers of entry into manufacturing comes from his own experience running up against those same obstacles. Slant3D grew out of Slant Concepts, a product development firm that created its own products in addition to fleshing out those from customers. One of those Slant Concepts creations was a line of STEM kits; because of the small quantity needed, the company had the original products 3D printed via fused filament fabrication (FFF). When the kits proved to be more popular than anticipated, however, the company ended up building a 3D printer farm to produce them in larger quantities. Rather than change the process to conventional injection molding, Slant Concepts scaled production by simply adding more printers.

“We saw it would be easier to just deploy one thousand machines to make one thousand parts per hour than try to make a printer 50% faster.”

“In doing that, we realized that 3D printing had the capability to do mass scale,” Bentz says. “Fundamentally you’re just putting in plastic and electricity. There are no more raw materials than in injection molding.” FFF in particular is well-suited to the printer farm approach for mass production, he says, because it offers a wide variety of color options and because parts can come off the printer more or less complete, provided they have been designed to avoid support structures.

The success of this particular project led to the 2018 spinout of Slant3D, which today operates two 3D printer farms in the Boise, Idaho, area and will soon add a third in Austin, Texas. Building out these production facilities hasn’t been a simple matter of buying some off-the-shelf 3D printers, however. At Slant3D’s launch, Bentz saw that existing 3D printers didn’t offer the level of automation that would be necessary to scale the technology in the long term, and so the company opted to develop its own. Its Mason 3D printers have been developed for reliable unattended printing, with a durable monolithic cube design and printhead attachments that can push completed prints off the build plate for continuous production.

Each Mason 3D printer can be assembled in about 4 hours, allowing Slant3D to easily scale production as demand grows. The company also offers the machines for sale to production clients who want to prototype and prove out designs before sending files for manufacturing.

Throwing its weight behind a proprietary machine has forced Slant3D to make some choices about how to advance this technology. A key decision early on was to scale production by printer numbers, not by accelerating the process.

“I think FFF is just about maxed out to as fast as it will go,” Bentz says. “We saw it would be easier to just deploy one thousand machines to make one thousand parts per hour than try to make a printer 50% faster. That’s the only way you can get real scale.”

As such the Mason has a fairly simple construction of in-house 3D printed and outsourced machined components. Approximately 15 screws hold the entire printer together, and a new Mason can be assembled in about 4 hours. All the printers are built in Boise, allowing Slant3D to add to its capacity at any time. Currently the main facility is equipped with 100 Mason 3D printers while the recently established Print Farm Beta (doubling as Slant3D’s new headquarters) has several hundred in operation. Print Farm Beta will hold more than 800 Mason printers when fully built out in 2021, and the Austin farm will add another 500 or so machines to Slant3D’s total capacity.

Print Farm Beta, Slant3D’s headquarters and second site in the Boise area, will hold 800 Mason 3D printers when fully completed in 2021. Another printer farm in Austin, Texas, will add another 500 printers to the company’s total capacity.

Physical Products at the Speed of Digital Ones

The new Angled business takes advantage of the lessons learned through Slant3D as well as its sister company’s open capacity, but the newer business serves a different purpose and clientele. Rather than hundreds or thousands of parts at once, Angled’s production is piecemeal manufacturing of complete consumer goods. Its storefront is in effect a digital inventory — the products it can contain are limitless, but they are only manufactured if and when there is demand for them. And while Slant3D largely serves industrial manufacturers seeking prototyping or production services, Angled is directed at those who might not think of themselves as manufacturers at all.

A typical order for Slant3D might be hundreds or thousands of industrial parts (left). But Angled.io can leverage the same 3D printer farm model for piecemeal, on-demand production of consumer goods like this pen holder with no minimum order necessary.

Under this product fulfillment model, inventors, designers and creators can upload their 3D printable designs into the Angled store to sell directly to consumers, dramatically reducing the amount of time it take to launch a product. Designers earn a royalty each time one of their items is ordered, while Slant3D takes care of manufacturing and shipping. Individuals no longer have to take on the risk of manufacturing in order to create, launch and sell a product.

“It’s a way to monetize their content that otherwise they wouldn’t have,” Bentz says, contrasting Angled’s royalty-based commerce system with 3D model repositories that don’t pay or reward designers for their creativity. “The fact that it’s now possible to make a living designing really cool products we hope brings people out of the woodwork, the very same way the Apple app store brought developers and programmers out of the woodwork,” he says.

For now, the Angled shop offers a curated catalog of 3D printed products. The listings are mostly household and kitchen items, specifically things that are “both searchable and marketable,” Bentz says, “so that we can legitimize these products in the wider world. They have to be applicable to the normal human on Facebook. These products solve a very tangible problem for the folks who are buying, and they also happen to be well-optimized for 3D printing.”

The Angled store currently contains a range of household items such as fishing bobbers, phone stands, vases, lamps, organizers, models and more. Although all the items are 3D printed and optimized for FFF, they are meant to be attractive to consumers for their functionality and aesthetics, not the manufacturing method.

The curation strategy is a potential way to drum up business in the early stages of Angled, but it’s also a way of overcoming anti-3D printing bias from the designers Angled wants to attract. FFF 3D printing in particular has a negative reputation partly because of some unreliable and finicky consumer models that have become popular, Bentz believes, and so part of Angled’s initial mission is to overcome designers’ preconceived notions. If designers come to trust the technology, they will not only be able to get products off the ground quickly and cost effectively, but to create better, more optimized products that take advantage of 3D printing’s unique capabilities.

Bentz’s farsighted vision for the store is to allow new Angled designers to list products with minimal onboarding, and to eventually partner with OEMs to expand into spare parts for appliances and other direct-to-consumer 3D printed products. Designers from all over the world will be able to participate in the platform, to the benefit of both sides. 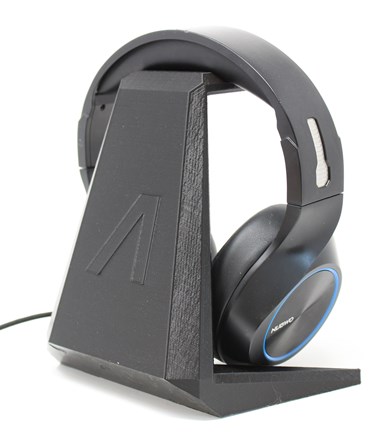 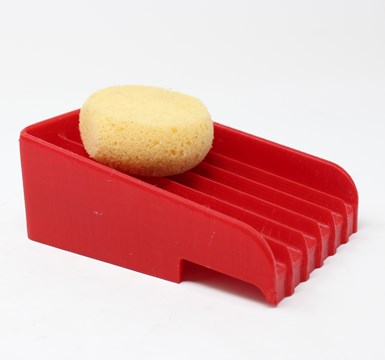 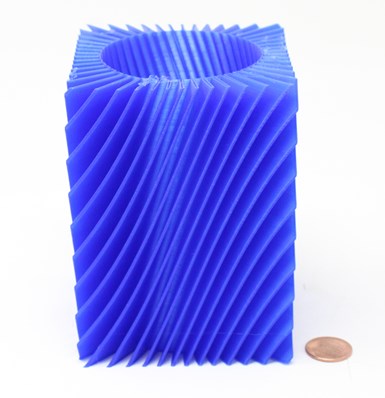 3D printing need not be a steppingstone on the way to a conventional manufacturing process. In Angled’s model, plastic goods can be 3D printed at costs competitive with injection molding, but without the added expense of tooling.

“From Angled’s perspective, we’re not limited by our local design resources,” Bentz says. “There are potentially a billion designers who can all monetize this and sell things in the United States without having to deal with the issues associated with manufacturing something internationally. They get immediate access to one of the most lucrative markets in the world.” Customers, too, stand to gain from the availability of innovative consumer goods, spares and replacement parts.

For now all of Angled’s products are being made in Idaho, but Bentz expects to open the Austin location within the next year to provide another hub for manufacturing and shipping. While Angled is distributing and decentralizing its manufacturing across these facilities, production in multiple locations isn’t exactly the point. Bentz points out that shipping within the U.S. is fairly easy, and it is usually possible to get parts to consumers within a couple of days regardless of their location within the country.

But satellite facilities are proving to be necessary as a way of earning customers and dispelling the myths that 3D printing is slow, expensive and poor quality. Bentz wants to advance the message that 3D printing is a viable production method in and of itself, and not just a steppingstone to injection molding. With the print farm model Slant and Angled can compete on cost against this conventional process, and take advantage of the design and production benefits of 3D printing as well — even if showcasing 3D printing isn’t strictly the goal in the long term.

“If you buy something off Amazon, you don’t care how it was made so long as it does the job and looks nice when it shows up,” Bentz says. “We want Angled products to be attractive to you even if you’re not excited about 3D printing. We can get 3D printing so cheap that the production process becomes invisible.”