In-process shaping via high-speed milling plus minimal shrinkage in sintering enable TrueShape to deliver molds and other metal 3D printed parts that require little to no postprocessing. Photos: Mantle

On paper, metal 3D printing for mold tooling has obvious advantages. Choosing additive manufacturing (AM) over machining or EDM offers design opportunities to improve the mold’s cooling and cycle time performance, plus a strategy to speed product development. But in practice, the metal 3D printing processes most often applied to mold tooling — direct metal laser sintering (DMLS) and directed energy deposition (DED) — are expensive, can take as long as conventional machining, and typically result in a mold core or cavity that is still incomplete once the build is done. These metal 3D printed pieces will require machining to bring them to their final form and needed surface finish.

Mantle offers another option. The company, which recently emerged from stealth mode, has developed the TrueShape 3D printing process with the moldmaking sector in mind. The method combines extrusion of a metal paste with in-process high-speed milling to deliver metal parts that typically require no additional postprocessing after the sintering step. A finished mold tool (or other metal part) can be made faster and in fewer steps; in many cases tooling produced this way can go straight into use in injection molding.

In other types of metal 3D printing, “Postprocessing can be 75% of the cost and a huge portion of time,” says Ted Sorom, Mantle founder and CEO. The company’s TrueShape process has been developed to reduce cost and lead time by minimizing postprocessing or avoiding it all together, with an aim toward making 3D printed tooling faster and more affordable for moldmakers.

The hybrid technique applies a Flowable Metal Paste (FMP) consisting of metal powder with a small amount of liquid via an extrusion nozzle to build up the part. Each layer is dried after it is deposited to remove the liquid, leaving just the metal powder behind. High-speed milling can be applied throughout the printing process — whether at every layer, only on certain features, or at the end of printing. The resulting “green” or “brown” 3D printed parts are said to be denser than those created in similar 3D printing processes; there is no curing or debinding needed, and the final sintering step that fully solidifies the part results in just 9 to 11% shrinkage, the company says. 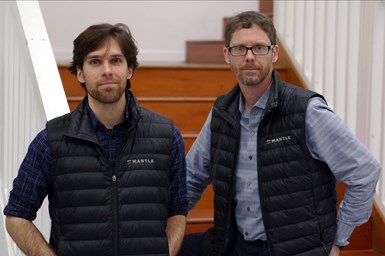 Printing and sintering together can take about two days, but one of TrueShape’s chief advantages is that the sintering is often the end

of the process — rather than a step on the way to machining or further finishing. “Pre-processing” of the part through milling, coupled with low shrinkage, means that Mantle parts can emerge from the sintering furnace with tolerances and surface finishes suitable for immediate use. Two days to achieve a finished part is a different proposition than two days to a near-net part that will require additional postprocessing, Sorom notes.

Getting to a Final Metal Part Faster

TrueShape represents a process consolidation that dramatically reduces the time from that button press to final part, compared to both conventional processing and other forms of 3D printing. Design advantages such as conformal cooling that contribute to cycle time and part quality improvements have so far been the chief justification for the high cost of DMLS mold tooling; these same design features are possible to realize through Mantle’s process, but are not a prerequisite to choose this route. The speed and other benefits of the technique can still be achieved even when the mold itself is mundane rather than complex, making this a cost-effective alternative to other 3D printing techniques as well as machining and EDM.

The extrusion-based process also brings unique benefits compared to powder-based 3D printing. In a typical powder-bed fusion process, material uniformity breeds predictability and part quality. The metal powder used needs to be a homogenous blend of material; due to the unpredictability of the recoater, it would not be possible to control a mix of materials. In contrast, Mantle’s Flowable Metal Paste material format allows for mixing powders of different types and particle sizes that can be evenly distributed by the liquid component for a better, stronger microstructure in the finished product. Thus far Mantle has developed two materials, H13 and P2X (a P20 tool steel alternative), but other alloys and proprietary blends are possible future offerings.

The technology, like any 3D printing method, does have its limitations. For one, the sintering step limits the kinds of materials that can be used, and parts and tools made this way are limited to the current machine’s 200 by 200 by 150-mm build volume

. Extrusion does not provide as many geometric possibilities as other 3D printing methods; while complexity is possible, this 3D printer has not been optimized to deliver lattices or geometries that require support structures, instead focusing on design features more common to typical injection molds. And while TrueShape alone can deliver high accuracy and surface finishes, there are cases where the as-built tool will require additional postprocessing via conventional modification methods like polishing, milling or EDM. Yet the affordability of the system (said to be about a quarter of the cost of a DMLS printer), along with its consolidated printing process and time savings, make it an attractive alternative to other moldmaking methods.

An Addition to a Moldmaker’s Arsenal

Mantle’s goal is not to disrupt the existing moldmaking supply chain but rather to grease the wheels in those workflows and relationships by greatly reducing tool lead times and ultimately product time to market. The company just recently emerged from stealth mode in February 2021, but already has a collection of users and case studies that demonstrate how this process can provide value within existing infrastructure.

This mold for a medical device manufacturer was printed within one week, and required no surface finishing before being used for production injection molding.

In one case, Mantle worked with a medical device manufacturer that needed to create a prototype of an injection molded part. Because the product requires testing in the intended production material, the prototype also needed to be made from the same high-temperature plastic. It typically takes this manufacturer about seven weeks to have a prototype mold made. Mantle was able to 3D print the tool within just one week, an 80% lead time savings, and reduce the cost of the tooling by half. The tools came within 0.001 inch

of the model dimensions and achieved surface finish acceptable to go straight into production. 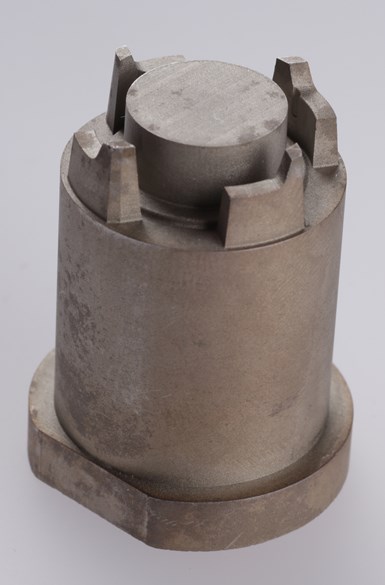 Mold inserts like this have been used to produce more than 200,000 dishwasher components so far.

In another instance, the company applied TrueShape to make several mold inserts for a dishwasher component. The appliance manufacturer had obtained other conventional inserts within about a week for several thousand dollars each; Mantle was able to build the inserts in just a couple of days for only a few hundred dollars. Those 3D printed inserts have thus far molded more than 200,000 parts and have shown wear consistent with their conventional counterparts.

While Mantle is providing manufacturing services currently, its aim is not to be a parts producer. Instead, the goal is to place the TrueShape system at the moldmaking and machine shop facilities that would normally be making tooling anyway. In a world where OEMs want to respond to customers rapidly, a technology like this will let these shops be better positioned to deliver tooling quickly and adjust it as needed, passing the time savings up the chain.

There will be applications beyond tooling, too. Sorom sees potential for the process in any area that could benefit from rapid production of finished metal parts. That might mean spare parts, or end-use production for industries like automotive or aerospace. In any case, the self-contained TrueShape process could bring the dream of “just press print” closer to reality for metal 3D printing.