How a 3D-Printed Metal Ankle Implant Replaces an Entire Bone

Through a novel surgery involving a 3D-printed talus bone, surgeons at the University of Miami found success — and unexpected challenges — with a patient suffering from sickle cell disease.
#metal #implants

Colbalt chrome talus bones 3D printed by Restor3D out of Durham, North Carolina. Modeled off of CT scans of the patient’s native bone, the three sizes offer surgeons a chance to select the best fit.

Laying on the operating table at the University of Miami Medical Center, 24-year-old Gracia Sylla knew her future lifestyle depended on a surgery that had never been performed in that hospital.

Sylla suffers from the debilitating sickle cell disease, a genetic disorder that blocks blood flow and, in her case, caused avascular necrosis, or “bone death,” in her talus bones — the two, irregularly shaped ankle bones that sit between the heel and shin bones. For several months, Sylla had been working with Dr. Amiethab Aiyer, an orthopedic surgeon at the University of Miami (UM) in Florida, to find relief from the pain. When ankle braces and physical therapy proved ineffective, Dr. Aiyer initially offered surgical options that included a fusion of the ankle.

Surgery options for cases like Sylla’s are typically severe. The common course of action for a badly injured or necrotic talus bone has been to fuse the ankle directly to the hindfoot — a procedure that would have not only left Sylla without the ability to move her foot but also would have shortened the length of her right leg significantly. This likely would have led to additional surgeries in both ankles to correct the length discrepancy.

Given these complexities, Dr. Aiyer began a collaboration with UM colleague Dr. Stephen Quinnan, an orthopedic trauma surgeon experienced with deformity correction, limb lengthening, and treatment of bone loss. After seeing the patient, Dr. Quinnan and Dr. Aiyer discussed the case and agreed that she was an ideal candidate for another, very different, previously unattainable option. The best option for Sylla, they decided, was a procedure that had been performed only a few dozen times in the U.S. and never at UM: a total talus replacement using a prosthetic metal bone 3D printed out of cobalt chrome. As it turns out, the doctors said, the very reason that talus bones are susceptible to avascular necrosis are partly why they’re ideal for 3D-printed replacements.

An X-ray image of Sylla’s ankle and the 3D-printed talus implant after its successful placement.

The anatomy of a talus bone is unique within the human body. Situated between the heel of your foot and your lower shin bones, tali (the plural for talus) are the keystones of the hindfoot, essentially serving as fulcrums between your lower legs and feet each time you take a step. Surrounded on all sides by adjacent bones, the talus is covered almost completely with soft tissue — cartilage that protects the talus from impact with surrounding bones, but also prevents damaged tali from healing by limiting the amount of blood that can access it. Moreover, there are no tendons or muscles that drive the bones’ movements. The motion of a talus is essentially a passive motion that allows adjacent structures to move freely around it.

All of this to say that a talus is one of the few bones in your body that can be removed and replaced with relative ease. Once the damaged talus is removed, as long as the size and shape of the replacement talus is right and the surface finish is smooth, it will work very much like the native bone. But, in cases that involve avascular necrosis of the talus, modeling its 3D-printed replacement is much more challenging.

The typical strategy for creating a replacement talus CAD model for 3D printing is to use X-rays and CT scans of the contralateral (or opposite) talus and base the CAD on a stereoscopic flip of the image. Sylla’s case was more complex in this regard, as she suffered from bilateral vascular necrosis that resulted in damage to both tali.

To create Sylla’s implant, Drs. Aiyer and Quinnan turned to Restor3D, a medical device company based out of Durham, North Carolina, that specializes in the 3D printing of a number of biomaterials for use in implants. The company, co-founded by Dr. Ken Gall, professor of mechanical engineering at Duke University, has been 3D printing implants with biomaterials such as titanium and cobalt chrome as well as biocompatible polymers since 2018. Restor3D specializes in custom implants used for trauma and oncology cases, as well as off-the-shelf, 3D-printed implants that have been cleared by the FDA for foot and ankle, as well as spinal applications.

A close-up of a 3D-printed cobalt chrome talus bone implant printed by Restor3D. The company, spun out of Duke University in 2017, specializes in custom implants used for trauma and oncology cases, and off-the-shelf 3D-printed implants that have been cleared by the FDA.

Drs. Aiyer and Quinnan worked closely with Restor3D throughout the modeling process, using Sylla’s slightly less-damaged left talus as a template. The radial curvatures and arcs for the dome of Sylla’s talus needed to be adjusted because it had flattened out due to damage, and all parties consulted for several weeks until a final model was achieved. Restor3D printed the talus implants out of cobalt chrome via selective laser melting, heat treated the implants, removed them from the build plate via electrical discharge machining (EDM), heat treated them offsite, then finished the remaining sterilization and post-processing in-house. This includes the final hand polishing that gives the talus’s undulating topography a liquid-metal sheen.

Sarah James is Restor3D’s vice president of sales, marketing and clinical solutions, and leads the team that designs all of the company’s custom implants. James says that it’s typical for Restor3D to provide surgeons with three sizes of each implant just in case there are unexpected soft-tissue constraints or if the surrounding bone quality is found to be worse than expected. “In typical total tali cases, we'll provide one option that's 100% the volume of the patient's native bone, as well as two smaller options — one that is perhaps a 5% decrease in volume overall from their native tali and one that's maybe a 10% decrease in volume.”

It often comes down to a patient’s unique anatomy and the surgeon’s preference, James says. A polymer trial part that corresponds to each of the three implant sizes is provided on surgery day. These trials, 3D printed out of a biocompatible polymer via stereolithography, have a handle that allows a surgeon to quickly test each implant size and check for overall fit in the patient’s anatomy before placing the actual implant.

James says that Restor3D also prints tali with suture holes and surface porosity, as well as implants with holes that allow screws to be countersunk into each 3D-printed talus and fused to the center of an adjacent joint in a way that works in conjunction with the total ankle. The popularity of 3D-printed total talus implants is enough that the company often prints tali for three patients at a time which, at three sizes per patient, translates up to nine tali per build plate. 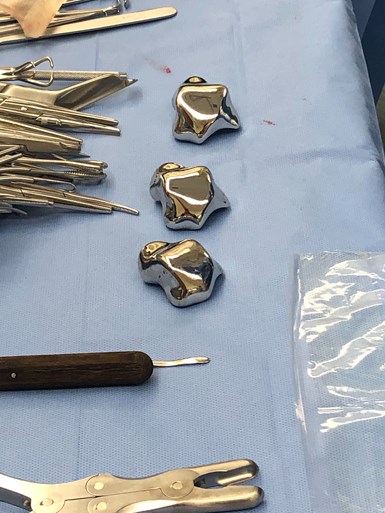 While the company seems to be finding success printing these and several other implants, 3D-printed talus replacement surgeries have been relatively uncommon in the U.S. until recently, especially when compared to several countries in Europe and Asia. According to Aiyer and Quinnan, this fact has more to do with cost and insurance than technology or biology.

It’s an unfortunate truth that even when prescribed by doctors as the best option for a patient, 3D-printed implants face a number of hurdles in the U.S. The first hurdle is often met at the hospital where the surgery is scheduled to take place. Custom 3D-printed implants like Sylla’s cobalt chrome talus are expensive, and hospitals typically have to pay this cost upfront — regardless of whether the hospital ultimately will be reimbursed by insurance. Before the University of Miami Health System approved Sylla’s procedure, the first hospital that Dr. Aiyer approached about it balked at the idea. Even when the cost of 3D-printed implants is covered by insurance, the design work and professional fees often are not. 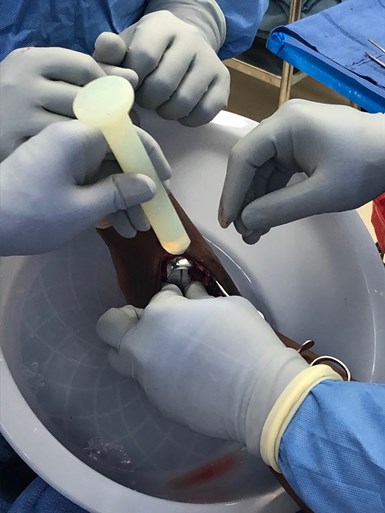 Surgical placement of the 3D-printed implant into Syllus’s ankle.

“One of the things that would help us most,” Dr. Quinnan says, “would be to help insurance companies and regulators to recognize the added cost of doing this. If we can make it easier to get the hospital repaid for the cost of the implant, that, in turn, will make that hospital more willing to do allow it.” Quinnan adds that the biggest change will occur when Medicare and Medicaid provide separate compensation for 3D-printed implants, because private insurance often follows the lead of these federal and state programs.

On the regulatory side, James points out that several different pathways exist within our current federal system that allow companies like Restor3D to provide 3D-printed implants, and adds that the FDA is constantly expanding its knowledge of 3D printing and its approach to regulations. In late 2017, the FDA released a guidance document to help medical device companies validate their processes. The document, titled “Technical Considerations for Additive Manufactured Medical Devices,” addresses design and manufacturing process considerations, software workflow, materials, postprocessing, mechanical testing and process validation topics.

All of these considerations are secondary to the patient herself, who Dr. Aiyer says was the perfect patient for what he calls a “Terminator-style, 21st Century approach” to helping her regain an active lifestyle. Aiyer says that when Sylla emailed him recently to cancel a routine checkup (her sickle cell anemia makes her high risk for COVID-19), she mentioned that she’s been working out again. “She told me she's even doing planks and squats — and this was literally a month ago.”

Aiyer sees a future where 3D printing expands its utility in the medical field, not only with the replacement of individual bones but also with soft tissues and better interfaces between the implant and surrounding structures. “When you're talking about quality of life for patients, you can’t really you can't put a price on that,” Aiyer says. “But only by using (3D-printed implants) more and more, and demonstrating their efficacy, can we help change things. I think we're really at the very beginning of a whole new field of development, and I think that foot and ankle is a prime spot for it. We were really fortunate to have such a great patient and a great team who worked together to knock this out of the park.”