Automotive manufacturers and other OEMs require mold tooling to build foam components like seat cushions. 3D printed tools could be a faster, more affordable way to prototype and produce these parts.
#sand #prototyping

“If the typical car holds five passengers, that’s a driver’s seat and front passenger seat, driver’s and passenger’s side seats in the rear, plus a middle seat. That could mean five different seat designs just for one vehicle,” says Darrell Stafford, president of Catalysis Additive Tooling. Each seat configuration will require its own set of foam components, which in turn will require sets of tools to mold them — starting in the prototyping stage for a new car. 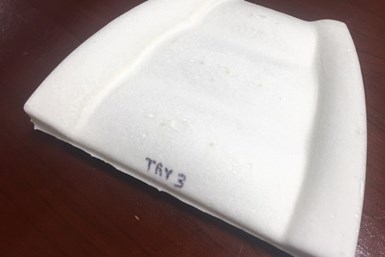 Every seat cushion and other foam component in a vehicle requires tooling. If each seat has a slightly different configuration dependent on its location in the vehicle, each one will need its own set of tooling and prototypes. Photos: Catalysis Additive Tooling

Prototype vehicles (especially those destined for crash and functional testing) require foam seat cushions, backs and headrests made in the design and materials intended for the final car, which means investing in mold tooling early on. The molds for these foam components are typically made from machined aluminum billet for the prototype parts. They can take two months or more to produce, and can cost upwards of $25,000 each. For a car with five different seat configurations, an automaker could be facing an investment of hundreds of thousands of dollars in mold tooling to prototype these parts, without knowing whether this investment will be transferable to the final production run.

This sample foam seat cushion (the back of the one pictured above) was made on the FX tool shown below. It took only about two weeks to manufacture the tool—a significant time savings over the 6-8 weeks usually needed. A full-scale machined aluminum tool for a cushion like this would cost in the neighborhood of $25,000, but with Catalysis’s sand-based method, would be around $8,000.

This moment is where Stafford sees 3D printing coming into play, or more specifically, 3D printed tooling. Based in Columbus, Ohio, Catalysis Additive Tooling has developed what it calls FX tooling, a technique whereby 3D printed sand forms — the same kind of sand printing used to make foundry tools for metal casting — are infiltrated with a proprietary resin to become durable tools suitable for processes like vacuum- and thermoforming.

Because foam molding happens at low heat and pressure, Stafford says, these sand-based tools can easily withstand the process to deliver prototype and short runs of foam components. Automakers and their suppliers can get this tooling faster and at a lower price than conventional machined aluminum tools. The FX tooling can be made and replaced quickly, but also supports design modifications, allowing for easier and more cost-effective iteration. Catalysis Additive Tooling estimates that a typical seat foam tool can be made in about two weeks, for about one-third the cost of a conventional machined mold.

This scaled-down tool for an automotive seat base was created as part of a test to check whether the FX Tooling coating would react with the foam material during molding. (The test was successful — no reaction — but the surface finish seen here is not indicative of the molds since developed, Stafford notes.) Catalysis Additive Tooling is now providing full-sized tools to automotive suppliers and others who require molded foam parts.

The company already has a handful of Tier One automotive supplier customers who are utilizing this option for prototype foam seat cushions. On paper, an FX tool could withstand high-volume production, but Catalysis has not yet had occasion to test that figure.

“We’re starting with prototyping,” Stafford explains, “but then maybe we’ll move to specialized production runs of up to 5,000 or so.”

There are plenty of other applications in between prototyping and that five-thousand mark, however, that the company is also exploring. Foam seating is used on airplanes, for furniture and in many other locations that could be served by 3D printed tooling, whether for prototyping or production runs.