3D printing is a fast-paced marketplace. Technologies launch and evolve quickly, and not just in functionality. 3D printing users increasingly want machines that not only perform, but look as sleek as the latest cars or home appliances. And the scale, though growing, has remained comparatively small.

In other words, 3D printing may be one of the markets best served by 3D printing.

That’s what ExOne discovered with the launch of its X1 25Pro, a metal binder jetting printer that premiered at the 2019 Rapid + TCT show. The company wanted a sleek new skin for this machine, but had only a short amount of time to design and produce it before the show. Previous models had been built with formed sheet metal, but the tooling for these parts is expensive and would have taken months to procure.

“We wanted a better look for the machine aesthetically, and to do that you’ve got to go to some kind of composite or vacuum formed panel,” says Rick Lucas, chief technology officer at ExOne. “Going into steel tooling was not a good option for the short time window, and the quantities were high enough that a single prototype tool was not going to be sufficient.”

The design for the X1 25Pro called for 18 unique pieces to form its outer skin. The fast turnaround required and diverse mix of parts made this job a good case for 3D printed tooling. Image: ExOne

Faced with these restrictions, ExOne turned to a close collaborator: Catalysis Additive Tooling. This central Ohio company takes a technology-agnostic approach to procuring tooling and manufacturing parts for a range of customers and applications. Rather than owning multiple types of manufacturing technology in house, the company works with strategic partners who specialize in specific processes to deliver the best option for the situation. 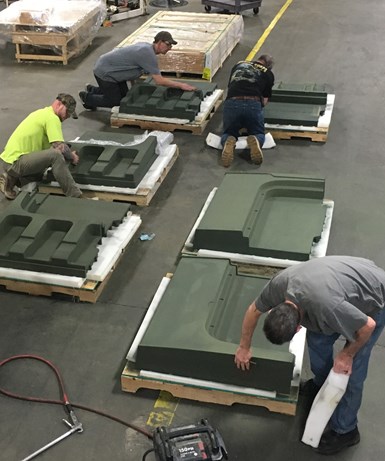 The vacuum form tools for each part of the X1 25Pro machine skin were 3D printed in sand at Humtown Products. These prints were shipped to Catalysis to be converted into FX tooling with proprietary resin and coatings.

One of the company’s unique offerings is “Catalysis FX” tooling that starts with ExOne’s binder jetting sand 3D printing process. Catalysis Additive Tooling has developed proprietary resins that can be applied to sand prints made this way and convert them into reusable tools for vacuum forming, thermoforming and more.After some initial vacuum forming tests using this type of tooling, ExOne was satisfied that the results would deliver the desired quality and aesthetics for the exterior of the X1 Pro25. Catalysis then began to design and manufacture the various tools that would be needed for the machine skin.

“We’ve made large tools before, but in this case it was a very quick set up for a fairly large quantity,” says Darrell Stafford, president and CEO of Catalysis Additive Tooling. “There were 18 total tools and almost all of them were close to 70 × 50 inches.”

The tools were developed by Catalysis and made on ExOne sand 3D printing machines at Humtown Products, Catalysis Additive Tooling’s binder jetting partner, and then shipped to Catalysis to be infiltrated with proprietary resin. The process to design and manufacture the tools took just three weeks.

From there, the final tools were shipped to the company’s vacuum forming partners, Shirley K’s and Techniform. After forming and trimming, Catalysis added hardware and other components to the panels to aid in assembly. The completed X1 25Pro machine was shipped to Rapid one day ahead of schedule, with an overall project time of just 6 weeks from design to finish.

Darrell Stafford, president and CEO of Catalysis Additive Tooling, and Rick Lucas, CTO of ExOne, stand in front of the X1 25Pro at Rapid + TCT 2019.

“Steel tooling probably would have been ten times the cost of this tooling,” Lucas says. “But the bigger benefit for us is speed. To do metal tooling probably would have taken more than 6 months, maybe a year. Weeks versus months is a huge deal. There’s also the aesthetic piece of this. If you’re bending sheet metal, you are very limited in terms of the types of features you can do.”

The FX tooling allows for more innovative design features, as well as easier design changes. Since the machine’s launch at Rapid, ExOne has made several modifications to the skin. (The production version of the X1 25Pro with these design updates will be on display at Formnext 2019). The machine’s front panel had alterations significant enough to warrant 3D printing a new tool, but the other tools have simply been modified to accommodate the changes. All but the front panel tool is still in use. Other Catalysis FX tools made this way have produced 2,000-plus parts with no degradation, Stafford says, and the company has not hit a ceiling yet on maximum number of runs.

This project is just one example of ongoing collaboration between ExOne and Catalysis Additive Tooling, Lucas and Stafford note. In addition to vacuum form tooling, the two companies are also exploring strategies for making hydroform tooling and even composite layup forms this way.

“One of the unique things about this tooling is that its material properties are really driven by the medium that you print with, so you can literally dial in the expansion of your tooling,” Lucas says. “In cases like composite forming for aerospace, that can become a really important attribute.”

“…cost, speed and aesthetics…. That’s what you expect from additive manufacturing, and we’re actually seeing that value.”

ExOne also plans to continue vacuum forming 3D printer parts with FX tooling for future machines. “It’s our expectation that we will do future skins like this, and maybe other 3D printer parts,” Lucas says. “2,000 parts on a tool is certainly in a range that makes sense for us. But we also want to show customers how you can use our technology. This tooling delivers on cost, speed and aesthetics — those three things check the big boxes for us. That’s what you expect from additive manufacturing, and we’re actually seeing that value.”

Skins as well as other machine parts could be made with 3D printed FX tooling going forward.