26 Steps Vs. 9: The Metal AM Case for Mission Critical Parts

Knust Godwin introduced metal AM into its precision-machining environment nearly eight years ago. Now the company is using the capability to break through into new applications and give 3D printed mission-critical parts a renewed business case.
#machining #metal #postprocessing

When we think of “mission critical parts,” we might conjure images of turbine blades, combustors or mechanical control systems that are typically associated with aviation and spaceflight. In other words, parts in which failure results in some form of human catastrophe.

The real definition is much less dramatic: Mission critical parts are simply parts that are essential for the operation of an application. These can include impellers, pumps and manifolds for industrial applications from washing machines to turbomachinery.

For the past 50 years, Texas-based Knust Godwin has specialized in the precision machining of mission critical parts for the energy, aerospace and oil and gas industries, including turning and drilling operations for complex geometry parts produced out of Inconel, titanium and other exotic materials. Because of their composition and design complexity, these parts typically incur steep costs and require long lead times associated with obtaining castings and building the necessary tooling.

It was this combination of Knust Godwin’s low volume, complex, high-value parts that led the company to begin experimenting with additive manufacturing (AM) around 2010, specifically with powder bed fusion metal AM processes. Mike Corliss, the company’s vice president of technology, says that the decision to incorporate metal 3D printing into its production capabilities was simply a natural evolution toward new technologies, not unlike the transformation that computer numerical control (CNC) machining or even new types of cutting tools had on the industry decades ago.

“You need to look at your products and ask, ‘Does (additive) make sense?’ You've got to have the vision and you have to be able to realize the capabilities of this technology,” Corliss says. “I remember 40 years ago, getting my boss back in the day to consider inserted cutters. He didn’t like the cost, but then he saw the output of an inserted cutter and suddenly it was, ‘Buy more, buy more!’ With additive, I think once you understand its capabilities, it will be the same scenario: Buy more, because you can see the results of AM.”

Corliss specifically points to turbomachinery and heat exchangers as examples of AM’s ability to bring production efficiencies versus traditional manufacturing methods. Producing a traditional heat exchanger involves several processing steps, from cleaning the raw material to prepare it for brazing, then welding, machining, stacking and testing. Corliss says that, in total, the traditional manufacture of these parts includes 26 steps of what he calls labor touch time from beginning to end. 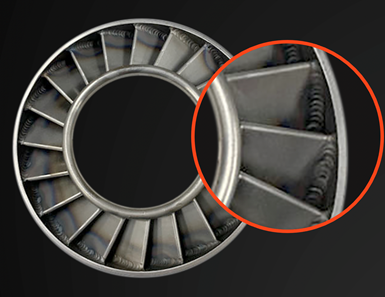 A traditionally manufactured motor stator contains dozens of weld joints, each of which is considered a risk failure if not executed properly.

When the company began 3D printing heat exchangers, Corliss says, it was able to consolidate the process from 26 steps to nine. “We print it, prep and clean it, wire EDM to remove supports if necessary, then heat treat it and machine the final surface finish before pressure testing,” he says. To reduce the process steps even further, the company purchased Velo3D Sapphire printers that enable support-free printing for geometric overhangs. Corliss says that the system has allowed the company to increase the efficiency of these parts due to the Sapphire’s ability to print thin walls and low angles without the need for supports — or the lengthy post-processing steps needed to remove those supports.

This chart shows the difference in the amount of process steps needed to produce a conventional plate-fin heat exchanger versus a 3D-printed part.

“We have much tighter process controls with this ability,” Corliss says. “If we can reduce the postprocessing, then the product at the end of the day is going to be much better and move much more quickly out the door.” He continues, “R﻿emoving supports on some products that we've printed could take longer than what it actually took to print the part. Next generation additive is allowing us to be able to take on these parts.”

Corliss also points to the uniformity of downskin surfaces printed on the Sapphire systems — surfaces such as low-angle overhangs on 3D printed impeller blades — as key to reducing customer costs and lead times. In fact, learning which surfaces need to be machined to decrease roughness versus those that can be left as-is has played a big role in Knust Godwin’s adoption of metal additive manufacturing. “We produce a lot of shrouded impellers,” Corliss says, “and it often used to take us longer to get the supports out of the channels than it did to print the part. So we had to learn how to adapt: What do we postprocess, and what do we leave as-printed? We had to educate our shop floor guys and all of the operators — this is where we’re leaving stock, this is where we’re not leaving stock. When we’ve got an almost-finished part we have to be really careful how to handle it so we don’t end up with a scrapped part.” 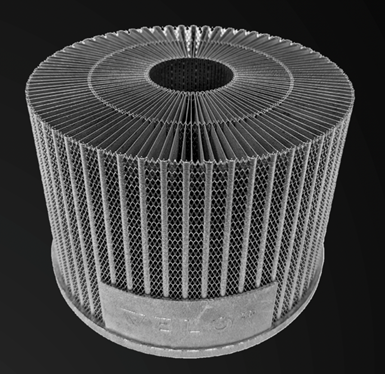 Corliss says that even though the company decided to retrain existing staff to run its 3D printers rather than hire AM specialists, by that point the toughest hurdle toward adopting AM had already been cleared: convincing leadership that AM was worth the investment. The only way to make an informed decision, Corliss says, was to create a detailed cost analysis comparison, part by part and step by step, between subtractive and additive processes. The majority of parts at Knust Godwin are still produced traditionally, but the analyses revealed that AM proved to be a better value proposition across a range of the company’s products.

“We analyzed all the costs involved with a product. How much does a weld joint cost? Say a weld joint costs an average of $100 and you have 20 on an individual part. Now, what is the cost if that weld joint fails?” He says that the company’s design engineers have become proficient with combining previously welded components into a single part, removing critical weaknesses and strengthening the part’s overall integrity. For Knust Godwin’s customers, especially its customers in the oil and gas industry, this has been key to their own willingness to adopt 3D printed parts for field operations.

“How much would you be fined by your customer for a field shutdown? We never want to have to answer that question,” Corliss says. “The late penalties, the infield replacement costs that you would incur if you had a product that just failed — you just don't want to ever have to deal with that. So that's why we have to make sure that the build quality of our AM parts meets or exceeds the requirements of traditional, subtractive parts.”

I recently talked with Mike Corliss about this and related topics during an IMTS spark presentation within a series called AM In-Depth. To view the presentation, find it on IMTS spark and add it to your My Spark Planner.