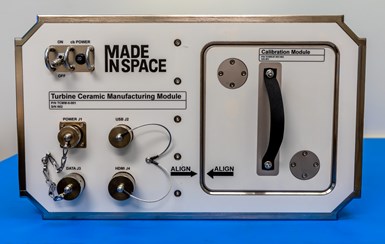 According to the company, manufacturing turbine components in microgravity could produce parts with better performance, including higher strength and lower residual stress, due to a reduction in defects caused by gravity, such as sedimentation and composition gradients. This technology demonstrates the space station’s potential use for unique manufacturing capabilities which could increase the station’s commercial utilization.

The CMM is a new 3D printing technology on the ISS and will be the first stereolithography (SLA) printer to operate in orbit. This 3D printing method employs UV-curable resin and a UV laser to form 3D-printed objects. SLA printing is well-suited for manufacturing high-accuracy parts with complex geometries. MIS pioneered manufacturing capabilities in space with its first- and second-generation 3D printers, with on-orbit operations dating back to 2014.

MIS is a subsidiary of Redwire, a provider of mission-critical space solutions and high-reliability components. “This mission is an exciting opportunity that further demonstrates the value of the ISS as a platform for commercial innovation and utilization,” says Michael Snyder, chief engineer of Made In Space and chief technology officer of Redwire. “Through our partnership with NASA, we are identifying and developing advanced manufacturing processes on orbit that could yield sustainable demand from terrestrial markets. CMM is the first of several missions that could signal a new market for space-enabled products.”

The CMM was developed in partnership with NASA’s ISS Research Integration Office at the Johnson Space Center, HRL Laboratories of Malibu, California, and Sierra Turbines of San Jose, California.