Why Makelab Is Still Betting on 3D Printing for Product Development

Three years ago Christina Perla was an industrial designer using the services of a local 3D printing hub. Today she’s the co-owner of that company, and doubling down on its prototyping roots.
#prototyping #polymer

As 3D printing adoption grows and additive manufacturers seek out specialized production niches, is there still a place for prototyping and product development services? Makelab co-owner and CEO Christina Perla is betting yes.

“We like to think of the 3D printing service market as very similar to the paper printing market,” she says. “Although almost everyone has a paper printer at home, it doesn’t mean that they want to print presentation material on it. It doesn’t mean they’re going to get everything from that one printer.”

Just as office supply stores and shipping providers fill the need for professional paper printing services, Perla sees Makelab bridging a gap left between designers/inventors and their products. With just eight staff members and two types of polymer 3D printers, Makelab produces prototypes, display fixtures, appearance models and more from its downtown Brooklyn facility. But the company’s defining feature is an emphasis on service to provide product development outsourcing “that doesn’t feel like outsourcing.” Perla and her co-owner and fiancé Manny Mota are uniquely suited to lead Makelab in this goal: They were once its customers themselves.

Outsourced Product Development by and for Designers

Perla’s educational background is in industrial design, and she previously worked as a designer for several NYC firms before striking out as a product development freelancer with Mota. While she’d been exposed to 3D printing in her past jobs, it wasn’t until she began to need prototypes for her own clients that she truly began to explore the technology. She found a local 3D printing service provider in the Bushwick neighborhood of Brooklyn and became a regular client as well as a friend of the owner. When he decided to move abroad in 2017, he sold the company to Perla and Mota. 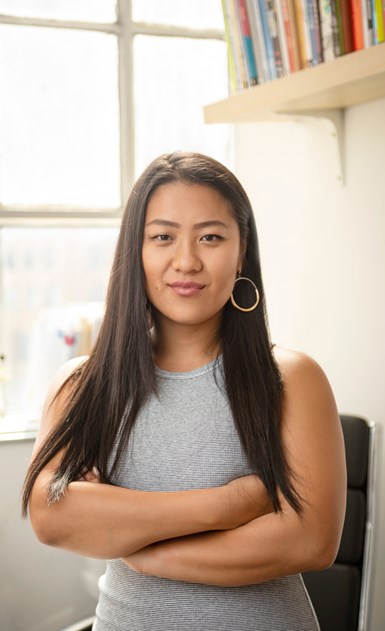 Christina Perla has used her industrial design background to grow Makelab into a reliable service for other designers needing prototypes and product development work. Photos: Makelab

In a flash, they went from being the firm’s key clients to being its owners. Perla and Mota’s focus shifted to helping other designers get the services and prototypes they needed, informed by their own experiences as product developers. “We are industrial designers, and we know the workflows in and out because we’ve done it,” Perla says. “Being a customer of our own product first has helped us find our niche.”

The business that Perla and Mota took over in April 2017 comprised 10 different polymer 3D printers, all from different manufacturers. In the last three years, they have changed the company name to Makelab, moved the equipment twice, and set about streamlining the operations. Today Makelab uses just two 3D printing platforms: Prusa i3 MK3s for fused filament fabrication (FFF) and Formlabs Form2 for stereolithography. This curated fleet is simpler to manage and maintain, and the two 3D printing processes are able to handle almost all of Makelab’s work. (On occasion jobs are batched out to partners if other technologies are needed.)

The company today makes some short-run production parts, but Perla says its business is at least 65% prototyping work. Its clients are primarily industrial designers and project managers at larger companies, but also startup founders and inventors looking to get a product off the ground. About 40% of jobs come through Makelab’s automatic quoting and ordering capability online, but the rest require some amount of collaboration, design services and finessing by working with the client, many of whom are local to Brooklyn or elsewhere in New York City.

While the auto-quote-and-print clients help pay the bills, Perla believes the company’s real strength is serving the customers who need more of a project management approach. Her team’s ability to help clients articulate what they hope to achieve gives clarity to the product development process, which is then supported by rapid prototyping via 3D printing to nail the design.

“Digging a little bit deeper in every interaction and putting a little more work into it just brings those opportunities to life...”

“When someone comes in and asks a bunch of questions, the conversation could end when we answer the question — but I always train the service team to push it a little bit farther,” Perla says. “What are you really looking for? Where can we really help? Digging a little bit deeper in every interaction and putting a little more work into it just brings those opportunities to life that maybe we wouldn’t have found with one-sentence answers. Even if they don’t have a fully formed idea, they can still talk it out and then we can find it together.”

One Makelab customer who utilized the company’s product development services is Folia Water, creator of “the world’s first water filter for pennies, not dollars.” Part of its product is a plastic funnel (SLA prototype shown here) that holds a specialized filter, allowing users to purify water for drinking. Working with Makelab to design and prototype this item saved the company at least 8 weeks in product development, Perla says.

In many ways Makelab harkens back to 3D printing’s beginnings as a rapid prototyping technology, primarily serving designers engaged in developing new products. Indeed, Perla isn’t particularly interested in pursuing production applications and will only take on short production runs in cases when the company has a suitable material and the price point makes sense for the customer.

But as more companies and individuals acquire their own 3D printers, will Makelab’s niche in product development continue to make sense? Perla believes so, pointing out that many of the clients in the company’s portfolio today already do have their own printers but still choose to outsource product development work to Makelab.

“...sometimes it’s just easier to outsource. We hit right in that sweet spot.”

“The resources and the time that you need to upkeep a 3D printer properly can be a bit difficult to manage,” Perla says. “If something breaks, who knows how long you’re going to be spending on that machine as an industrial designer or an engineer who only knows a little bit about it? If you’re not a heavy, heavy user sometimes it’s just easier to outsource. We hit right in that sweet spot.”