Cutaway of the prototype electric drive for a potential Porsche sportscar. Note how the housing contains both an electric motor and a two-speed gearbox. The stiffness between the two is a critical parameter, which the housing contributes to achieving.

Like all automotive OEMs Porsche is working to electrify its lineup, which can mean providing electric motors to supplement internal combustion engines. In this configuration, the 800-volt permanent magnet motor has a gearbox that then coordinates with the engine, with the package being located on the front axle of the car.

Two aspects of this: (1) there are demanding packaging considerations because of the fundamental limitations of the parameters of the chassis; (2) the motor drive housing must be light.

So the company is using two technologies that allow them to realize an electric drive housing that they think could be deployed in a limited-edition super sports car: additive manufacturing and generative design. The printed housing with support structures.

Falk Heilfort, Project Manager in the Powertrain Advance Development department, explains, “Our goal was to develop an electric drive with the potential for additive manufacturing, at the same time integrating as many functions and parts as possible in the drive housing, saving weight and optimizing the structure.”Engineers working on the electric drive took into account elements of the system including the bearings, heat exchangers and oil supply and modeled the loads and interfaces. Load paths were determined and lattice structures were defined, with areas that are under more stress enhanced and those under less load reduced in overall size.

Engineers working on the electric drive took into account elements of the system including the bearings, heat exchangers and oil supply and modeled the loads and interfaces. Load paths were determined and lattice structures were defined, with areas that are under more stress enhanced and those under less load reduced in overall size.

According to Sebastian Wachter, Specialist in Design Methodology and Topology Optimization in the Porsche Powertrain Advance Development department, “We were able to expand and improve our software solutions and methods for creating such parts and are now able to virtually implement them in a very short space of time.”

The designers and engineers used two software programs in the development of the housing: Altair Inspire for early work, then Dassault CATIA V5 to complete it.

The structure as designed required the use of additive manufacturing as the configuration didn’t lend itself to conventional casting.

The material used for the housing is an aluminum alloy, AlSi10Mg. 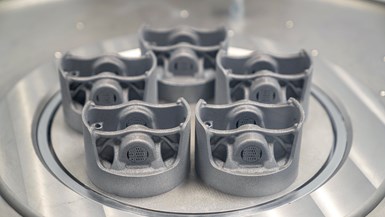 Porsche engineers aren’t strangers to 3D printing. “Thanks to the new, lighter pistons, we can increase the engine speed, lower the temperature load on the pistons and optimize combustion. This makes it possible to get up to 29.5 hp more power from the 690 hp biturbo engine, while at the same time improving efficiency,” said Frank Ickinger of the advance drive development department at Porsche.

The printed part provided plenty of benefits. For example, although there is a continuous wall thickness of 1.5 mm, the use of the lattices in the design resulted in a stiffness increase between the gearbox and the motor of 100%.

Through the integration of parts and topology optimization the weight of the housing was reduced by some 40%. The parts integration also meant less assembly to build the housing is necessary: about 40 steps or 20 minutes are removed.

Although those numbers are impressive, we were told by Porsche, “With the machine technology currently available, printing of the first housing prototype took 19 days and had to take place in two build processes due to the component size.”

That said, the company kept at it.

“With the latest machine generations that we used for a second prototype, it was possible to reduce this time by 90% to now about 21 hours, and the entire housing could be manufactured in just one build process.”

So even if it takes hours to produce things like housings, it is certainly in keeping with the company’s production cadence.