How 3D Printed Tools Add Value at This GM Plant

The part was simple. It was a washer, a flat ring only about the size of a quarter, used in about 85 different tools at GM’s Spring Hill, Tennessee, facility. But looks can be deceiving: Each of these washers cost the plant $37.

“There are a lot of small parts like this that are overpriced or are only sold in assemblies,” says Chris Gaddes. “That might be because they are too small and simple — the manufacturer has to mark up the price to make it worth their while.”

Gaddes is an employee of the design firm Gresham Smith, but for the past five years he has been embedded at the GM plant in Spring Hill. He came onboard in 2015 as a contracted CAD technician to help maintain the production floor layout. That was his sole focus until about 2017, when 3D printing became a part of his role. The plant had a MakerBot Replicator that was being underutilized, and so Gaddes was tasked with figuring out how to use it to add value to the plant.

“That washer was one of the first things we tried to replicate with the printer,” he says. “One of the purchasing managers was about to order more, and asked if we could print it instead. So I did. We installed some and one month later they were still running.”

3D printing the washer in plastic cost just 13 cents per part, a dramatic savings. But more significantly, this early win helped 3D printing advance at this particular GM plant. “That was the ‘aha’ moment,” Gaddes says. “That was when we realized we can now potentially replace parts instead of buying a whole assembly, and print locally instead of sending jobs out.”

3D Printing As a Culture Change

This early success helped to expand Gaddes’ role at the plant. He now spends more of his time running its 3D printers, looking for application opportunities on the auto line, and spreading the word about the technology.

“...we would like everyone to think about 3D printing before they buy something — even if it’s two seconds...”

“We don’t want people to try to 3D print everything,” Gaddes says. “But we would like everyone to think about 3D printing before they buy something — even if it’s two seconds, and the thought is gone because it’s a bad idea. We’re trying to change the culture, and teaching people to consider 3D printing.”

After the success of the washer, GM management encouraged plant employees to submit their own 3D printing ideas. The airbag installation tool at the right is one result. The fixture reduces an eight-step process down to just two or three steps by holding the components in place and freeing up the assembler’s hands.

This 3D printed tool holds the components of the airbag system in place while it is installed on the steering wheel.

Efforts to grow this 3D printing culture at the plant have led to more projects for Gaddes, including ideas from colleagues he might never have interacted with otherwise. In one case, an employee in the purchasing department was about to order a small aluminum tool used to disconnect coaxial cables made in Germany. Each tool cost several hundred dollars and the order would take 12 weeks to arrive. On a whim, he asked if Gaddes could print it.

“We ended up being able to make a similar part with the same function,” he says. “In three days, they had 24 of them in their pockets.” 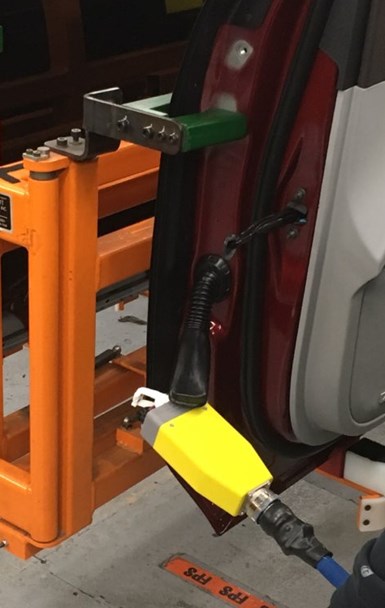 Hot drops like this one allow GM to test automotive components during assembly, before they are installed on vehicles.

In addition to saving time and cost, Gaddes’ efforts have allowed the Spring Hill GM plant to explore improvements in existing tooling that might otherwise have been ignored.

One example is part of a “hot drop” test for a vehicle door. This type of test involves hooking up a component to a hot drop that mimics the connection in the car to check the electrical systems.

In the case of a car door, the hot drop test might involved tasks like rolling up the window, testing the speakers or checking the lock mechanism. If problems are discovered, it is easier to correct wiring or make other repairs at this stage, before the component is installed in the car. 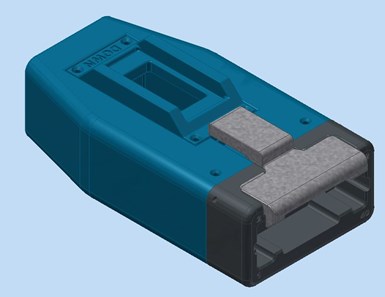 The number of tests that can be conducted at a given hot drop is limited by the number of prongs it has — at Spring Hill, most drops have three or four prongs. When the plant needed to incorporate a new test, Gaddes developed replacement hookups that included an additional prong. Even though the design didn’t change significantly, procuring new hookups would have been a difficult and time-consuming process through the conventional supply chain.

“You’d go back to your supplier that created this tool for you in the first place, and then they would go through their process and get you a new tool, the same as they got you the first tool,” Gaddes explains. “But the thing is, they’re recreating a whole new setup on their end. It ends up being thousands of dollars and a 16-week lead time. It could be that it’s not feasible at that point, and that we just wouldn’t do anything to the tool.”

Luckily, this wasn’t the case for the door test hot drop. Gaddes was able to perform the redesign in-house and 3D print just the component needed to add an additional prong. This design change was implemented within 2 weeks, with a cost savings of more than 80% over going through the original supplier.

“Sometimes we do things with 3D printing that we just wouldn't have even entertained in the first place with more traditional options,” he says. 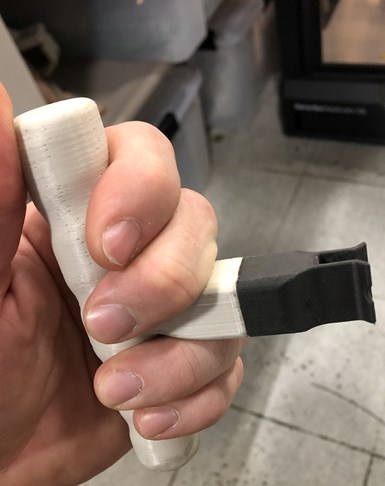 This T-handle tool for installing metal clips combines two 3D printed parts for their different material properties. The black portion is nylon, which offers the flexibility necessary to retain the clips, while the white handle is more rigid PLA.

As 3D printing’s use has grown at this GM plant, so too has its fleet of printers. New additions for 3D printed tools include a second MakerBot Z18 and a Markforged printer for printing in nylon. Gaddes uses this capability judiciously, often in combination with the MakerBot printers.

“PLA is still what we print primarily,” he says. “But if I find that PLA parts are breaking and I’m having to reprint tools, I’ll print them out of nylon. Or, I’ll change the design and print the majority of the tool out of PLA, and just the problem points with nylon.”

Gaddes’ advice for those thinking about adding a 3D printer for tooling purposes is simple: Just get started.

“You don’t have to have a half million-dollar machine to have successes,” Gaddes says. “Our most recent machine was a few thousand dollars, and it was only a couple of months before we had easily saved that cost with the printer. If you have just a couple of ideas, you can pay for your printer — and everything else is icing on the cake.”