EastPoint Prosthetics and Orthotics has a track record of changing lives with limb prostheses, orthoses, helmets and more. The digital workflow it has built with Additive America to 3D print these devices is now allowing this mission to go farther.
#polymer

Can 3D printing be a solution for producing custom protheses and orthoses? Additive America and EastPoint Prosthetics are collaborating to prove that it can. Photo Credits: Additive America

Three years ago, Brent Wright had a hunch that 3D printing could transform the way that his industry operates. Wright, an orthotist and prosthetist based in Raleigh, North Carolina, had been experimenting with desktop fused filament fabrication (FFF) in his work at EastPoint Prosthetics and Orthotics Inc. The technology was useful, but it wasn’t a match for end-use devices in terms of strength and durability. But when Wright first learned about another 3D printing process, Multi Jet Fusion (MJF) developed by HP, he saw a technology that could deliver these properties — if perhaps the price could be dropped.

He was intrigued enough to reach out to one of the technology’s users. Through LinkedIn Wright connected with Zac Holcomb, who was then working for a machine shop and service bureau in Central Ohio, to ask if MJF could deliver affordable 3D printed prostheses and orthoses. Holcomb said yes — and believed in that promise enough to relocate to North Carolina and found a new company, Additive America Inc., along with Wright and a third partner, Paul Sugg.

What these three have discovered is that Multi Jet Fusion is not only a viable option for building these devices, but a tool for fundamentally shifting how and where these devices can be delivered. Additive America today supplies bespoke 3D printed prosthetic limbs, helmets, orthotic devices and more, alongside industrial prototypes and production parts — more on that in a moment. But beyond a new business model, Wright and Holcomb see their work coalescing into a new type of workflow for prostheses and orthoses, one that can be streamlined, digital and even distributed around the world.

Orthoses and prostheses have historically been made through manual processes because of the highly tailored nature of these products. “It’s a scalable industry, but the solutions are one-offs every time,” Holcomb says. Every patient has different needs and anatomy, which means every device is bespoke.

“Everything we make is the only one in the world,” Wright says.

With a conventional workflow, this means relying on analog methods such as casting to capture patient anatomy and create tooling that can be used to manually build devices (not unlike the processes traditionally used to make mouthguards and other dental items). A socket for a leg prosthesis, for instance, might be developed by first casting the patient’s leg in plaster of paris, then using that cast as a kind of layup mold to build the device’s form by hand with composite fabric and resin. Manually placed fixtures and padding would complete the device.

Building the final socket with 3D printing changes the end process, but it also dictates a different workflow from the beginning. Unlike a hand layup process where it is up to the medical professional to place and shape material, Multi Jet Fusion needs voxel-by-voxel instructions to know where to deposit binder across the bed of powder. Arriving at this part map calls for a digital manufacturing workflow beginning with the patient.

The Structure.io scanner allows Wright to capture the dimensions and geometry of a patient’s body (or any other object, like this model) without taking a physical cast.

To support that workflow, EastPoint Prosthetics and Orthotics now relies more heavily on 3D scanning, specifically a Structure.io scanner which attaches to an iPad. A patient’s anatomy can be captured as easily as taking a video or series of photos, and the data is delivered to the orthotist or prosthetist via email. Rather than manipulating a physical mold or building material, Wright or another designer can adjust the data in 3D Systems’ Geomagic Freeform before sending it to Additive America for manufacturing.

Once a device has been 3D printed, Wright will finalize it with the patient to check the fit and add any necessary padding. If there are significant changes to be made, he can modify the design and have it reprinted. This is a shift from the way orthotists and prosthetists have traditionally approached the collaboration with the patient. 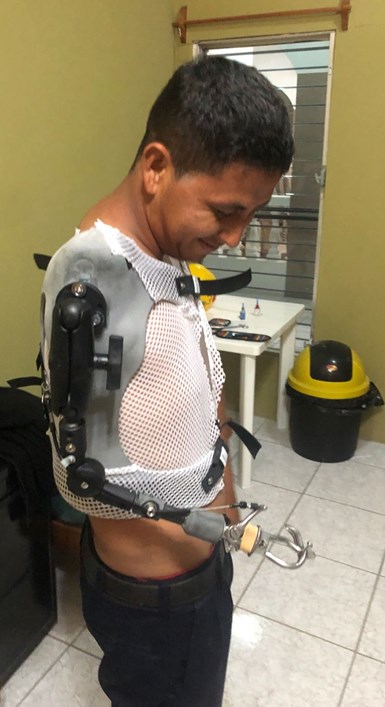 Less time spent manually producing prosthetic devices means that the clinician can spend more time with the patient getting the fit right.

“When you’re working with traditional fabrication, there is an artistry to it. You can take a little bit more material off, smooth a little bit there — but a lot of that work needs to be done on the backside,” Wright says. “That takes away some of the time you have with the patient, where you should be fitting and optimizing. With 3D printing, your quality time with the patient is significantly increased.”

The digital workflow essentially frontloads the artistry, calling for creativity up front and bringing design freedoms that help to minimize changes down the line. There is still skill involved in the fitting step, but the overall manufacturing process can be consolidated with 3D scanning and 3D printing. That means patients get their devices more quickly, and they tend to fit better than conventionally manufactured solutions. When there is a larger design issue, the clinician can simply tweak the digital file and quickly have the device printed again, rather than starting completely from scratch.

This agility between clinician and manufacturing is a factor that sets EastPoint and Additive America’s collaboration apart and makes this digital workflow possible. 3D printing is achieving wider adoption in prosthetics/orthotics, “but it’s still probably just 40 to 50% of service providers that have the scanning capability, and maybe just 10% that are doing manufacturing this way,” Wright says.

Speaking of cost, one important thing to note is that Multi Jet Fusion alone isn’t the whole answer to the “fast and affordable” question. MJF is fast compared to hand layup or even some other polymer 3D printing processes, but prostheses and orthoses tend to be larger parts that use more material and occupy a bigger footprint inside the build volume. Their size alone makes them more expensive to 3D print, to the point that a business making only these items would have a difficult time justifying their cost.

Devices like these sockets are relatively large and tall 3D printed parts. A build that contained only these parts would result in prohibitively high prices for each one.

“Printing these parts alone would be outrageous,” Wright says, recounting one of his early conversations with Holcomb. “But if you print other things alongside, it can work.”

This is why Additive America doesn’t limit the kind of work it takes on, and why any given batch of parts could contain industrial prototypes, robot end-of-arm tooling, and consumer products alongside ankle braces and prosthetic sockets. With MJF, each layer is cured all at once — so if print time is dictated by the layers needed for the tallest part in a build, a batch with a large prosthesis will take the same amount of time whether there is just that one part or a hundred others packed in with it. For Additive America, fuller builds run on a regular schedule also translate to cost savings.

To keep costs affordable, Additive America has adopted a “build share” model. The 3D printed prosthetic and orthotic devices shown here shared a build with parts meant for other industries and applications.

“We’re able to ‘build share’,” Holcomb explains. “We take industry parts from automotive, aerospace, consumer goods, short-run production, bridge production and use them as filler parts to go around some of the large prostheses or sockets that go into the build. The fact that we’re mixing all types of parts together into one build really helps us to reach an economical figure that’s palatable.”

Digital Manufacturing for a Flat World 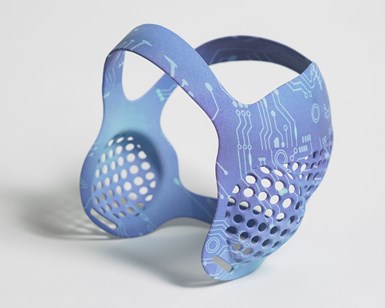 This helmet is a color replica of one made for a jiu-jitsu practitioner with a cochlear implant. The time from scan to completed helmet was just one week. More.  Photo Credit: Austin Grogan

The business model seems to be one that works. Since its launch in 2019, Additive America has grown from three founders to nine employees. It has built a steady social media following (not by accident, Holcomb says) on platforms including LinkedIn and Instagram. And it has successfully manufactured numerous orthoses and prostheses, including unique cases like the helmet pictured here used to protect a cochlear implant during martial arts training. (Learn much more about this device and the woman who wears it in this episode of The Cool Parts Show.)

The business is proving out the promise of 3D printing that Wright and Holcomb saw from the beginning. But their success is not exclusionary. Instead, Additive America’s founders see what they’ve built as a proof-of-concept workflow for other companies and collaborators; it’s also a foundation that allows them to pursue meaningful work elsewhere in the world. 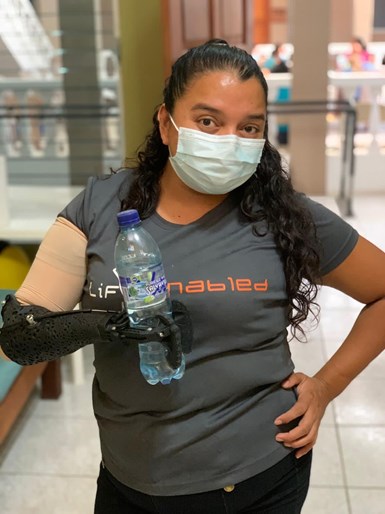 A 3D scan of this woman’s arm allowed EastPoint and Additive America to make a custom prosthesis that Wright delivered to Guatamala. A digital workflow can make these devices more readily available around the world.

With digital manufacturing technology, “The world is becoming flat,” Wright says. 3D scanning makes it possible for professionals located in North Carolina to design and produce parts for patients globally. Wright has already worked on several projects for people located in other parts of the world. In one case, a local contact in Guatemala scanned a group of patients needing prostheses and sent the data back to Wright in the United States. Additive America printed the needed devices, which Wright carried with him in a suitcase on a trip to deliver the devices and perform the needed fittings.

When 3D printing capacity is accessible nearby, the process can even be done fully remotely. In another instance, Wright designed a prosthesis for the father of a doctor in India. The two were able to find local providers with scanning and MJF capability, and so Wright coordinated the manufacturing from afar and walked the doctor through the fitting process over a Zoom call.

As the technology becomes more readily available, Additive America wants to take the digital manufacturing workflow global and see other orthotists and prosthetists applying 3D printing to make these devices.

“We want to get the most people help for the least amount of money,” Wright says.