This small company making small engines sees big wins from metal AM in terms of both product performance and responsiveness to the market. Here, size isn’t a factor in succeeding with AM — the application instead shows how the capability is at its best when it can serve both production and design.
#metal

Sean Hilbert of Cobra Aero says the Renishaw AM 400 system has been running “practically non-stop” since it was purchased it last year — the company’s first investment in metal additive manufacturing.

Where does metal part production via additive manufacturing (AM) make the most sense?

A few simple answers might quickly come to mind. Metal AM is a proven choice for medical implants. It has found applications making parts for aerospace and defense. And metal AM seemingly makes the most sense for large companies, in no small part because of the cost of the machines. 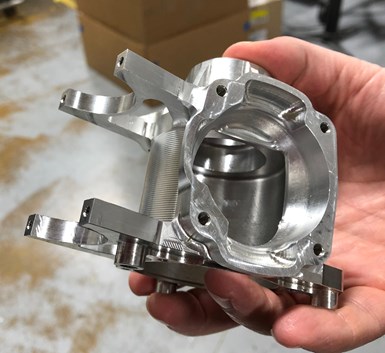 The company is no stranger to intricate parts, or skillfully leveraging its equipment to make them. Machined components such as this are produced on three-axis vertical machining centers.

However, Cobra Aero is none of these. The 35-employee manufacturer making small drone engines in Hillsdale, Michigan, recently invested in a selective laser melting (SLM) machine from Renishaw, adding metal 3D printing as a part-making capability alongside its CNC machine shop. Cobra president Sean Hilbert says he already foresees the day the company will add a second metal AM machine.

Yet in making this investment, the company seemingly skipped a step. Its machine shop routinely uses multiple setups on three-axis machining centers to make intricate parts that, in theory, could be made more quickly on a five-axis machine. Whether the volume or value of this work justifies the cost of a five-axis machine is a question the company thinks about; it hasn’t made this move yet. Meanwhile the company did make the move to the metal AM machine, a system for making intricate parts that is more costly than a five-axis machine would be. Why was this the right move, and what does the answer say to other established machining and metalworking facilities about whether they should be looking to metal 3D printing?

Cobra Aero’s application is intriguing because of what it shows about where additive metalworking can succeed. Which applications or industry sectors are fitting for AM for metal part production? Not just medical and aerospace, but many others as well. And what size of manufacturer is best suited to production metal AM? Arguably, this is not a relevant question.

Instead, metal AM works for Cobra Aero because it is an OEM. That is, an original equipment manufacturer — the creator and inventor of a product line. The machine shop here is not a job shop or contract shop, but instead a captive shop run for Cobra’s own products. The distinction is important. Being an OEM is valuable, because many (but not all) of the benefits of AM are design related. Realizing the full promise of production metal AM therefore requires the chance to produce in close contact with how the parts are designed, and even to aid in that design.

There are actually two Cobra sister companies sharing the Hillsdale site — two OEMs making two different product lines. Cobra Aero makes engines for unmanned aerial systems, meaning drone aircraft such as those used for military, weather observation and fire-fighting applications. This is the newer company and the one primarily employing additive. The company from which it was launched is Cobra Moto, the leading manufacturer of youth competition motorcycles. The two end markets could not be more different, but it turns out the challenges are the same: getting the most power and efficiency from an engine that unavoidably has to be compact and lightweight. 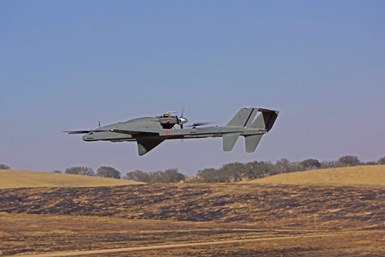 What do unmanned aerial systems (drones) have in common with youth motorcycles? Answer: small engines. Motorcycle maker Cobra saw drones as a way to diversify. Photo courtesy of L3Harris.

The need for greater power from drone engines was an opportunity the maker of small motorcycles saw early in the previous decade, launching Cobra Aero in 2014. Hilbert leads both companies. Unmanned aerial systems at that time represented “an industry in dire need of a good engine manufacturer,” he says. The weight, sophistication and importance of payloads being attached to these aircraft had dramatically outpaced the propulsion hardware, which was still equivalent to the motors used on hobby aircraft, he says. As a result, “you would often see a quarter-million-dollar camera at one end of the aircraft and an unreliable engine at the other.” Cobra Aero was born. 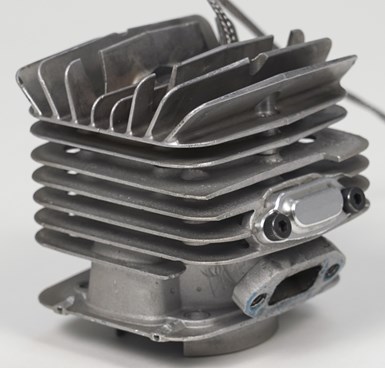 With this cylinder, the power of the drone engine was limited by cooling. Casting limited the aspect ratio of the cooling fins and how many fins there could be.

But the need for compact engine efficiency in terms of power output per cubic centimeter of engine volume was even greater for drones, and Cobra discovered a limit on that efficiency inherent to its established manufacturing process. On a 33 cubic centimeter (cc) single-cylinder engine, the piston cylinder’s cooling effectiveness was limited by the fin geometry, which was limited by casting. In early engines, the company lived at that limit, employing a design with only the fin spacing and fin aspect ratio casting could produce. Later, Hilbert and the Cobra team recognized that additive manufacturing — specifically, selective laser melting — could produce a form with thinner cooling fins spaced more closely together. The power of the engine was increased solely because the cylinder became more effective at transferring away heat. 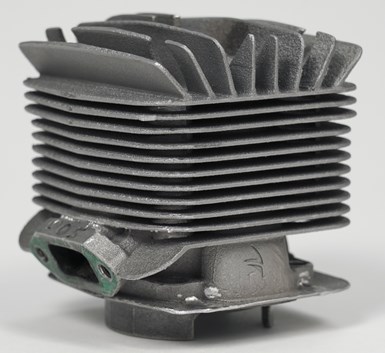 But importantly, this was not a single design change. Rather, it was the beginning of an ongoing process of design change. Once additive was introduced to the process and the product line, there was no other way to realize its full value except to continue refining the part design in search of all the benefits additive could bring. 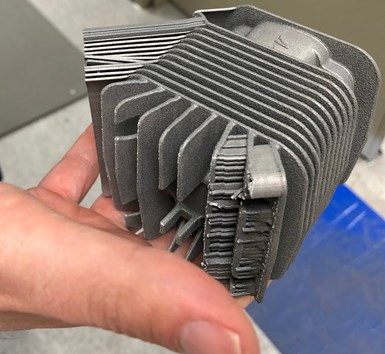 While 3D printed fins solved the cooling problem, they arguably introduced a manufacturing problem. Removing the support structures (still seen on this part) entails hours per part of manual labor.

And heat transfer was not the only problem solved. Lead time was another. Time to market with castings is slow. “Unmanned systems is still a new industry, potentially requiring us to pivot quickly with new product offerings as new opportunities appear,” Hilbert says. His company worked with AM machine provider Renishaw to validate AM for Cobra’s parts. Once proven, the company was glad to bring this production resource in-house — not just for design iteration but also for the chance to manufacture new product offerings quickly without waiting for tooling or an external supplier. 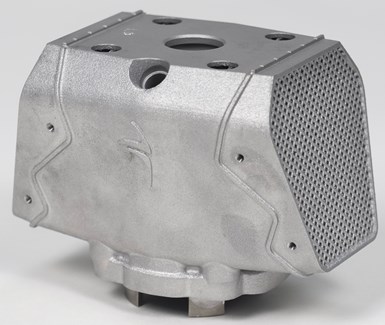 Lattices solved both the cooling and manufacturing problems. Integrating a cowl that was formerly a separate component created a volume able to contain lattice forms that now provide for cooling. This part can be printed without supports, eliminating support structure removal. 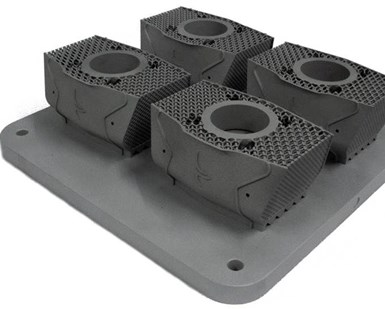 This failed build of the cylinders shows the variation in the lattice inside. Photo: Cobra Aero

The iteration of the 33cc engine cylinder ultimately went way beyond fins. Assembly consolidation by combining the cylinder with the cowl around it allowed for a radically different design achieving cooling not through fins but through lattices engineered with the help of nTopology. This design achieved the cooling necessary for the engine in a form that eliminated much of the postprocessing work that had added cost and time to this part. (Indeed, we have told the story of the design journey of this part elsewhere. Watch this episode of The Cool Parts Show to learn more about the design changes made to this part thanks to additive manufacturing, and the design challenges this OEM was able to overcome.) Redesign through additive also improved related parts. Engine mounts, for example, were made to be one-half the weight of the lightest mounts available from suppliers, Hilbert says. And the company is working on a more powerful liquid-cooled three-cylinder engine that also relies on components that can only be made additively.

One Product Line Advances Another

The Renishaw selective laser melting machine has been running practically non-stop since Cobra Aero purchased it last year, Hilbert says. Drone engine design iteration and part production don’t account for all of this. In support of the motorcycle business, the AM capability has been useful in making one-off part prototypes more quickly than they could be made through machining, and in producing tooling that is making conventional manufacturing operations more capable and efficient. 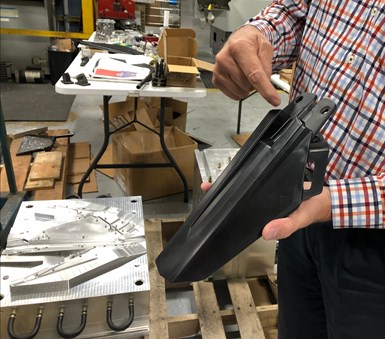 An example of AM’s role in Cobra’s conventional manufacturing. The mold for this motorcycle part required an insert with a long cooling channel that the company was able to produce additively.

A notable example of this relates to injection molding. Cobra has molding capability in-house and makes much of its own mold tooling. The mold for one newly designed motorcycle component required a long, thin insert with channels running through its entire length for cooling. The only practical way for Cobra to make the insert was through additive manufacturing. Thus the process was conventional — injection molding — but it achieved a part design that couldn’t have been produced without AM providing the tooling.

Hilbert says unexpected advances such as this were hoped for — in fact, banked on — from the beginning. “When we first did the math on how the metal AM machine was going to pay us back, we had to kind of fudge things a little bit,” he says. “We knew we would have to use this machine in ways we hadn’t identified yet, or else it wouldn’t pay back. And as it turns out, I think that that calculation was too conservative. We’ve kept it running all the time; we can't wait to get a second machine.”

Having additive capability available brings the chance to reinvent other engine components as well. Topology optimization of the engine mounts (three parts at the ends of the three legs on the engine seen here) removed half the weight of these parts compared to the lightest off-the-shelf alternative. 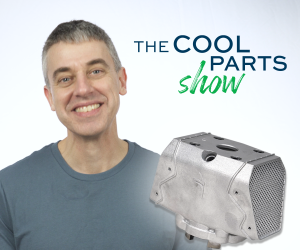 Learn more about how Cobra Aero redesigned a drone engine cylinder for 3D printing in this episode of The Cool Parts Show, a video series from Additive Manufacturing. WATCH