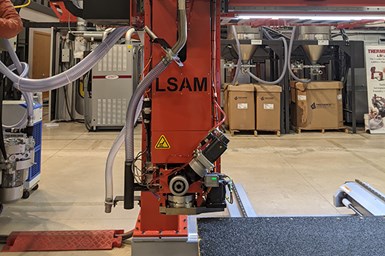 The LSAM is designed to ensure complete fusion between large-scale thermoplastic printed layers.

The LSAM continuously measures the temperature of a printed layer just before a new bead is added. This enables the machine to automatically adjust the feed speed, using layer time control to print at or very close to the optimal temperature needed to achieve the best possible layer-to-layer fusion.

The process uses a non-contact temperature sensor which rotates about the print nozzle under servo control and continuously measures the temperature of the existing layer less than a half inch in front of the moving print nozzle. This provides precise feedback of the temperature at the moment of layer fusion, ensuring integrity of the bond being generated at every point on every layer, the company says.

Data from the probe is processed through an advanced algorithm which adjusts the speed at which each layer is printed. The algorithm takes into account not only the temperature at the point of printing (compared to the target temperature) but also the changing geometry of the part as it grows. Print speed is no longer defined in the print CNC program, but instead is continuously adjusted by the LSAM control system during printing in response to changes in the print environment.

With Thermwood’s automatic print temperature control, optimum print temperature is now part of the parameters stored in the control for each polymer and is determined when the polymer is first qualified. To run a specific material using a properly equipped LSAM, it is only necessary to load a part program, specify the material and turn it on. The entire build process, including all temperature control, is then fairly automatic.