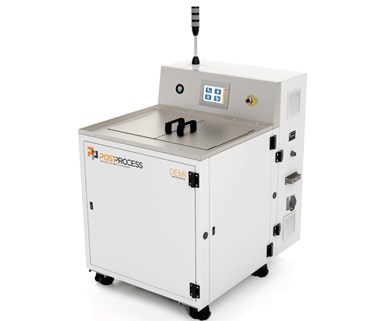 PostProcess Technologies’ Demi automated resin removal solution is engineered to optimize workflow and eliminate the need for excessive manual labor, as well as harsh and flammable solvents, during the post-printing process. According to the company, the Demi solution also works with resin technologies such as DLP and CLIP.

Empire Group adopted the Demi solution, leading to improvements in scalability and cost-savings for Empire’s stereolithography (SLA) additive operation. Known for its rapid prototyping, Empire has been utilizing 3D printing since 1999. Though Empire has long embraced the accuracy and flexibility of SLA 3D printing, it became clear as the company grew that its previous manual resin removal process was causing process bottlenecks.

To keep its additive workflow moving smoothly, Empire Group implemented the automated PostProcess Demi resin removal solution with SLA-formulated detergent. After adopting the software-driven Demi into its additive workflow, Empire Group experienced time and cost savings across the board. It also effectively eliminated the need for excessive manual labor, as well as harsh and flammable solvents, during the post-printing process.