General Motors is putting additive manufacturing on the fast track (figuratively, at least) with the upcoming Blackwing variants of Cadillac’s CT4-V and CT5-V sports sedans.

Due to hit the streets next summer, the high-performance models will feature the carmaker’s first applications of functional 3D-printed parts in the form of HVAC ducts and wiring harness brackets.

They also will sport a 3D-printed medallion (pictured below) on top of the gear shift knob for cars equipped with a 6-speed manual transmission.

The low-volume Blackwings will be an important learning experience as GM starts to expand its use of 3D printing from prototype parts to production vehicles. 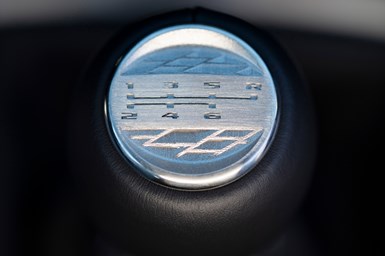 This includes working with several different materials, processes and suppliers. The HVAC ducts, for example, are made of nylon 12, while the electrical bracket is aluminum, and the shift knob emblem is stainless steel.

It takes less than a day to complete production batches and about a week for finishing (post-processing and quality checks), according to the carmaker.

GM plans to use several “qualified” additive manufacturing suppliers on the initiative but declined to name them.

Among the likely candidates are Desktop Metal, Formlabs, Markforged and Stratasys. The carmaker already is working with these companies at its Additive Innovation Lab in Warren, Mich., which opened last year.

In addition to the innovation center, GM is planning to open an Additive Industrialization Lab in Warren.

More news about that facility—and possibly some other upcoming production applications— is due to be announced next week. Stay tuned.