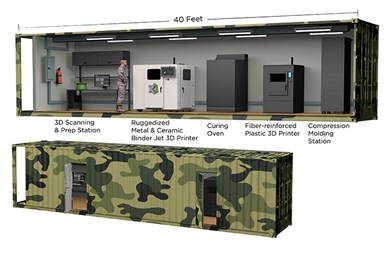 Ideally, military personnel would 3D print a digital file of a broken or damaged part and have a finished product in less than 48 hours without conventional tooling in the self-contained pod.

The ExOne Co., a manufacturer of industrial sand and metal 3D printers using binder jetting technology, has been awarded a U.S. Department of Defense (DOD) contract to develop a fully operational, self-contained 3D printing “factory” housed in a shipping container.

Now under development, the rugged 3D printing factory pod would be set up in a standard shipping container, up to 40 feet long, to be deployed directly in the field, via land, sea or air, to manufacture parts to support war theaters, disaster relief or other remote operations. By enabling a military team on site to 3D print parts as needed, the downtime in a crisis can be reduced from weeks or months to only a few days or less, while also reducing military costs.

Awarded by the Defense Logistics Agency (DLA) in August 2020, the $1.6 million contract will focus specifically on improving the ruggedness of ExOne’s commercially available binder jet 3D printers for a wide range of operating conditions while maintaining exacting final part quality. Additionally, the project will aim to simplify use of the technology in the field with software and training, so the pod can be used with minimal technical knowledge.

As part of the project, ExOne is developing a special military-edition 3D printer that is capable of binder jet 3D printing more than 20 metal, ceramic and other powder materials into direct final products or tooling. The upgraded commercial 3D printer will have a unique body style and other features that will make it a rugged, military-grade product.

Ideally, military personnel would 3D print a digital file of a broken or damaged part and have a finished product in less than 48 hours without conventional tooling in the self-contained pod. This approach would save critical time (machined tooling to create parts typically takes 4-6 weeks), while also reducing waste and the need to carry expensive inventory in crisis zones.