The ‘WarpSPEE3D’ program aims to significantly increase unique parts available to the Army compared to what the regular supply chain can provide.
#metal #enterprise #supplychain 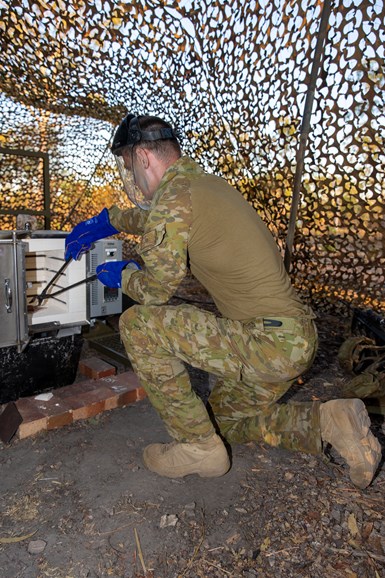 A ‘WarpSpee3D’ 3D metal printer was put through its paces by the Australian Army.

A ‘WarpSpee3D’ 3D metal printer has been deployed for its second trial and been put through its paces by the Australian Army during a two-week field exercise in the extreme heat and humidity of the Northern Territory.

The printer arrived in Darwin in early June for the first trial and forms the backbone of the Army’s developing 3D printing capability. WarpSpee3D is said to be the world’s first large-format metal 3D printer to use cold spray technology that enables significantly faster and more cost-effective metal part production than traditional manufacturing.

Developed by Spee3D, an Australian manufacturer of metal additive manufacturing technology, the printer is capable of printing large metal parts up to 40 kg at a speed of 100 g per minute. After receiving a number of upgrades and modifications in the two months since its first deployment, the WarpSpee3D print cell deployed as part of 1 CSSB’s larger Brigade Support Group to various field locations in temperatures up to 37°C and 80% humidity, while printing and machining genuine military metal parts.

The company says the Spee3D printers make metal parts the fastest way possible, leveraging metal cold spray technology to produce industrial quality metal parts in just minutes, rather than days or weeks. This process harnesses the power of kinetic energy, rather than relying on high-power lasers and expensive gases, enabling 3D metal printing in the field at affordable costs.

The trials are part of the Australian Army’s $1.5 million investment in a Spee3D technology pilot announced in February 2020. The 12-month trial is designed to test the feasibility of deploying 3D metal printers both on base and in the field. Spee3D partnered with the Advanced Manufacturing Alliance (AMA) and Charles Darwin University (CDU) to deliver the program with soldiers from the Australian Army’s 1st Brigade training in 3D printing at CDU since February.

The program aims to significantly increase unique parts available to the Army compared to what the regular supply chain can provide.

“This second field deployment proves our technology is a genuine solution for expeditionary metal 3D printing. This two-week trial demonstrates the WarpSpee3D is a robust workhorse that is capable of printing real parts and solving real problems in the field,” says Byron Kennedy, Spee3D CEO. “It also proves that soldiers can take control of the whole workflow of creating the spare parts they need, from design to printing and post-processing, right here where they need them.”