John Sorvillo and Sean Dobson will be recognized at 2021 AMUG Conference in Orlando, Florida, May 2-6.
#education #amug 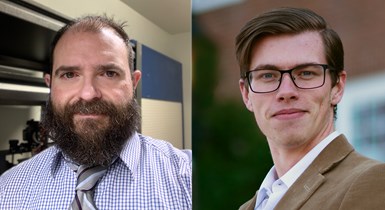 The Additive Manufacturing Users Group (AMUG) has announced its 2021 scholarship winners. John Sorvillo, director for Westwood Prepatory Academy at New Beginnings in Youngstown, Ohio, has been awarded the Randy Stevens Scholarship, while Sean Dobson, a doctoral student in material science at the University of Cincinnati (UC), has been awarded the Guy E. Bourdeau Scholarship.

The scholarships honor and recognize students and teachers who demonstrate a passion for AM. The 2021 recipients demonstrate the passion in two ways: a dedication to advancing the technology and a commitment to advancing individuals through the technology. As scholarship recipients, Sorvillo and Dobson will attend the AMUG Conference, where they will engage with additive manufacturing (AM) users in Orlando, Florida, May 2-6, 2021. They will present their work on on stage on Tuesday, May 4, 2021.

Sorvillo is a licensed elementary school teacher who’s been in educational administration for nearly a decade. At the Westwood Preparatory Academy, the students are in residential care, most under court custody with no familial provisions. As a director at the academy, Sorvillo builds programs, teaches and counsels with the goal of inspiring hope through education. “We try to leverage that education into their therapy, bringing us back to inspiring hope in them,” Sorvillo says. “We set them up to succeed in our classrooms. The more they achieve, the more they believe in themselves.”

Sorvillo has extended classroom education through partnerships, collaborations and grants where the students’ actions benefit others and themselves. Initially, the academy had one 3D printer, but it struggled to incorporate it into instructional lessons. With Sorvillo’s efforts, it now has four printers that function as conduits for experiencing life skills, such as teamwork; acquiring technology skills, such as CAD design; and gaining ‘soft skills’ needed to function in society. “As amazing as the printers are, it’s the design and collaboration workstations that really make the difference,” Sorvillo says.

Sorvillo credits the 3D printing program for playing a huge role in creating inspiration. “We’re able to show at-risk students a whole new way of learning. This technology has opened avenues of teaching that we never imagined. We are able to positively impact many facets of our student’s lives,” he says. “3D printing has given us the ability to make our kids a positive force in our community.”

As an undergraduate in mechanical engineering at the University of Louisville (U of L), Dobson’s introduction to AM occurred during an internship in Gulfstream Aerospace’s 3D Printing Laboratory. “I left the internship with a newfound desire for AM,” Dobson says.

He also discovered an affinity for sharing that passion with others through training, tours and collaborations. “There is an ingrained feeling of pride working in a field that can bring so many people together and engage the young and old in a STEM field,” he says.

The interest in AM led him to become an undergraduate research assistant in U of L’s Rapid Prototyping Center (RPC). There he found that metal AM was the area in which he was most interested, and he followed that path in working on RPC projects for organizations such as NASA and the U.S. Navy.

Dobson’s senior project — creating an affordable, modular desktop machine for fused filament fabrication, CNC milling, laser cutting and injection molding — spilled outside of the lab when he and two colleagues founded ModMan Technology. After earning his bachelor’s degree, Dobson earned a master’s degree in mechanical engineering from U of L. During that pursuit, he continued his research for the U.S. Navy’s project as a graduate research assistant. Currently working toward a doctorate in material science at UC, Dobson also works for Vertex Manufacturing as an additive and material engineer.