Why I Am Bullish on Additive: 3 Factors Favoring 3D Printing’s Continued Advance

The shortcomings are being overcome and the advantage is nothing less than freedom. Only the pace of the advance is uncertain.
#supplychain #enterprise #basics

I recently recorded a conversation with podcast host Mike Vasquez, founder of 3Degrees, for his podcast, “3Degrees Discussions.” Stephanie Hendrixson was his guest as well. At one point, he asked us to make the case for additive manufacturing (AM) to a young person contemplating his or her future. Will the continued advance of this technology cover an arc that can sustain careers? Will its adoption provide for an array of opportunity to those who invest in making themselves knowledgeable in AM?

We both responded, and I stand by the spontaneous answer I gave. But the question had me thinking long after our taping was done. He was asking, basically: Does this additive thing really have legs? How do you know? Good questions.

My answer to the first part: Yes! Legs, arc, opportunity — the future of AM adoption and maturation are assured enough to offer all of this. But the second part of the implied inquiry is valid. Why am I this bullish, recognizing the fact that established successes of 3D printing as a production operation are still relatively few within manufacturing overall? That part of my answer draws on various points. In a fuller response than what I gave during the podcast taping, here is the case I see, and the reasons why I expect AM applications and our reliance on AM to continue to advance:

1. The shortcomings of AM are differences of degree.

In general, it is no longer a matter of dispute whether an additive process can make the part. 3D printing can be trusted to realize the consistency, integrity and geometric fidelity even a highly engineered production part requires. When AM is not adopted, the reason typically is not capability but rather a number, namely: too high a price, too small a production rate or maybe a performance spec not yet available in a material applied through 3D printing. That this is the nature of the shortfall is something important to see, because the advance of the technology is improving all these numbers. And the movement of the numbers brings adoption thresholds closer and closer for one manufacturer after another. (The exception to this point: formal quality standards and the lack of clear metrics for qualifying additive parts. This shortcoming is different from a mere number, and it is another reason AM might fail to win adoption. However, the point stands: The trend is in the direction of this problem getting worked out.) 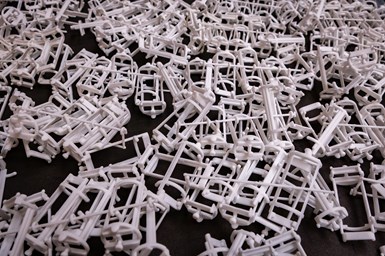 One of our recent stories on 3D printing for production involves brackets made through selective laser sintering rather than injection molding. The bracket is for a hydrometer used in brewing beer. Photo credit: Shapeways.

2. The opportunities for AM are transformative.

A contrast to the previous point: Whereas the shortfalls are numeric, the advantage of AM is not just a measured improvement but a fundamental and far-reaching transformation. The chance to realize part designs not possible with any other process is an aspect of this. Perhaps even more important is the removal of tooling, meaning the chance to delay or even avoid the “mold moment” in which the part design and production quantity must be locked in. Additive is freedom, and freedom is a value people commit to fervently once they appreciate its full worth.

3. The lack of adoption owes in part to the persistence of what works.

I am a believer in “good enough,” as most of us are. There is generally no good cause to abandon something that is working well, given that doing so would lead to disruption and uncertainty costing both peace and time. Conventional manufacturing processes in place today are performing well. Thus, there is often no good cause to switch to additive even when the move will bring new freedoms. This fact more than any other will set the pace of AM adoption — that is, a slowing due to no shortcoming of additive, just to the powerful momentum of the now. Additive will tend to be the choice instead more often in cases where an altogether new product or plant offers the chance to choose the means of production on its merits, without an incumbent to consider.

We have the word “production” on the cover of this month’s issue of our magazine. That theme — the use of AM for production of end-use parts — is getting harder and harder for us to build an issue around when we’re planning the publication. The reason is not because the topic is a challenge, but because AM as a production resource is getting to be so accepted and the theme is getting to be so broad. In this issue, for example, nearly every one of the staff-written articles is about a successful application of 3D printing for repetitive part production. (Our next production-themed issue might need to be more focused than just production alone.) True, some of these applications are new and experimental, but each of these (GM’s commitment, for example) hints at greater application of additive to come. Is additive winning acceptance; has it lain a broad-enough foundation on which to build the future? For evidence that the answer is yes, read the collection of articles that appear in that issue.