Why HP Believes in 3D Printing

The reasons go beyond the world of manufacturing. Ramon Pastor, global head of plastics solutions for 3D Printing and Digital Manufacturing, shares the four macrotrends at the foundation of HP’s 3D printing business.

HP Inc. has invested in becoming a key player in the 3D printing marketplace, most recently evidenced through the opening of a 3D Printing and Digital Manufacturing Center of Excellence in Barcelona, pictured here. Four global macrotrends helped spur the company’s move into this space.

While many 3D printing equipment suppliers have grown up inside the 3D printing marketplace, there have been some successful crossovers from the machine tool industry and consumer worlds. HP Inc. is perhaps the best representation of the latter, a household name that has found its footing in industrial additive manufacturing (AM). HP first came onto the AM scene in 2016 with the launch of its 4200 series Multi Jet Fusion (MJF) polymer 3D printing platform. Over the past several years, the company has introduced the 300/500 series for prototyping, launched its Metal Jet system, introduced materials development initiatives, added the Jet Fusion 5200 series, and partnered with giants in manufacturing such as Siemens, Materialise, GKN and BASF. Its most recent advance is a newly opened 3D Printing and Digital Manufacturing Center of Excellence in Barcelona, Spain, that will serve as a facility for R&D as well as collaboration with customers and partners.

This succession of milestones suggests a company not just following a fad, but making a significant investment in a new way of making things. Why?

Why enter the industrial market? Why disrupt the organization to the extent of making 3D printing a third business segment within the same corporation that runs the 2D printing and consumer PC businesses? Simply put, why does HP believe in 3D printing? 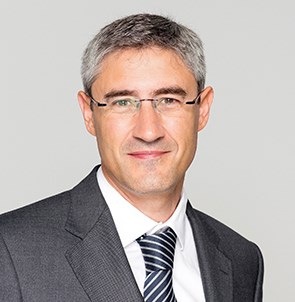 Ramon Pastor is global head of plastics solutions for 3D Printing and Digital Manufacturing at HP. He was tapped from HP’s Large Format Printing business to help initiate its exploration of 3D printing. We spoke during the grand opening of the new Barcelona Center of Excellence. Photo credit: HP Inc.

That is the question I sought to answer when I sat down with Ramon Pastor, the global head of plastics solutions for 3D Printing and Digital Manufacturing at HP. We spoke last month at the grand opening of the Center of Excellence mentioned above. As Pastor explained to me, the decision to enter the 3D printing market predates the development and launch of the 4200 platform by several years. The impetus traces back to a report published by an internal team at HP examining global macrotrends. He says four macrotrends in particular pointed the way toward 3D printing:

People are migrating toward large cities in the U.S. and Europe, but even more so in emerging countries. “This is putting a lot of stress on these cities to be able to manage infrastructure,” Pastor says. One way this is playing out is in the shift from owning to sharing resources — think city-wide bike/scooter programs and rideshare apps in lieu of individual-owned transportation. But urbanization also points to the need to find different ways of manufacturing and delivering goods. “In today’s paradigm of production, you produce in China, in Vietnam, in Thailand, and then you waste a lot of resources translating all the products to where the demand is,” Pastor says. “To make a sustainable ecosystem of mega-cities, you need to change the way to produce products, and distribute products.”

One way changing demographics are expected to alter manufacturing relates to the desire of younger consumers to purchase personalized goods. Mass customization becomes a reality for applications like these custom glasses and orthotics when products can be 3D printed without tooling.

The internet has allowed the world to become more globally connected than ever before, so that people in different geographic locations have access to many of the same resources and culture. “The next disruption, the next startup, the next business model can start up in India because they have access to the same assets as one that is in San Francisco,” Pastor says. Geographic location is no longer a hindrance to transmitting information or receiving it in a timely fashion. But simultaneously, “People are more aware of their local realities,” Pastor says. “Here in Catalonia, people value films done not in English, but in Catalan,” he explained, drawing an example from the Barcelona setting. Goods and services are valued more highly when they are made in or tailored to the locality where they are used.

Consumer demand is driving the trend toward ever-compressing product development timelines. “We need to use less and less time between better and better products,” he says. “Cutting the development cycle is very important.” 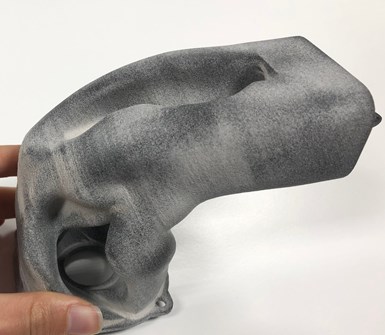 This air intake for the HP Jet Fusion (MJF) 300/500 series printers was redesigned from an assembly of six injection molded pieces to be 3D printed as just one. Using Siemens’ software, the development of this part took place in just 2 days, illustrating the truncated product development cycles made possible with 3D printing and industry collaboration.

“When you look at those macrotrends, it makes a lot of sense for the future of the global economy to invest in 3D printing,” Pastor says. “What 3D printing really tries to do is produce next to where the demand is, when you need the products and only the number that you need in this moment.”

For increasingly urban environments, 3D printing provides a way of making products in more diverse locations, with minimized waste. The technology can be compatible with automation and is capable of mass customization for changing demographic needs. As a data-driven technology, 3D printing embodies the global/local contrast, enabling data to be sent anywhere in the world to allow parts to be made in short runs in the localities that need them. And, the technology supports iterating and producing parts without the need for tooling, enabling innovation at breakneck speeds.

HP had been using 3D printing in its own labs for years, but identifying these macrotrends made it clear that there could be a business opportunity in this technology. “The mission of the 3D printing business is because of these trends,” Pastor says. “Not because of the reality today, but what we see in the future. We asked, how can we have an impact on these trends?”

HP’s recently launched Jet Fusion 5200 series is the next step in answering these macrotrends. Leveraging lessons learned from the HP Jet Fusion 4200 series as well as the Metal Jet platform, the 5200 platform is faster and more productive than its predecessors. HP says this platform could be cost competitive with injection molding in quantities higher than 100,000 for the right part capable of nesting efficiently within the build chamber. Photo credit: HP Inc.

For more on HP’s 3D Printing and Digital Manufacturing initiatives, see this report.