What A Former Moldmaker Has Learned About AM: Leverage Simplicity and Let It Scale

The once-again independent Linear AMS is now more focused on additive manufacturing than ever before.
#moldmaking #prototyping #polymer

Today, rather than making a mold for prototype parts, Linear AMS can 3D print plastic parts in the quantities automotive companies need for prototyping.

Linear AMS has stopped making molds. The company has sold all its CNC machine tools, the equipment it once used for moldmaking work. Headcount has been reduced by more than half, because moldmaking was the most labor-intensive unit of the company's business. All of this is a significant development for a company that started out as a mold shop — indeed, for a company that began with the name Linear Mold & Engineering. Focusing on its most profitable work and what seem to be its most promising business units in terms of scalability for the future, Linear is now going forward with one facility performing injection molding complemented by another facility performing both metal and polymer 3D printing. From now on, other companies will make Linear's molds. Examples of auto-industry prototype parts that no longer need to be made through molding.

Yet the company will still fill much the same niche. Linear built a reputation manufacturing mold tooling for the automotive industry, including prototype molds aimed at producing just hundreds or thousands of parts for vehicles still in development. This work came to be characterized by low margins and delayed payment terms, leading company CEO John Tenbusch to turn a different way. Today, he offers automotive-industry customers the chance to skip moldmaking for prototypes as he instead 3D prints the parts using Multi Jet Fusion machines from HP. 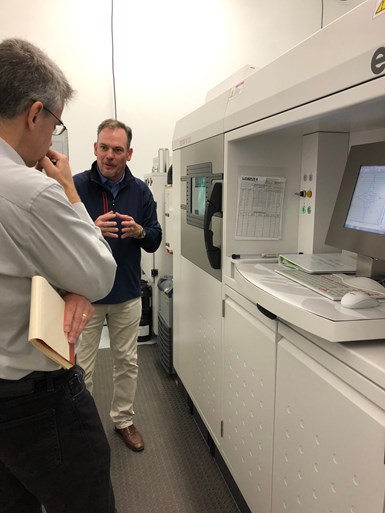 John Tenbusch led his business to invest in metal additive manufacturing over a decade ago. Linear remains a user of EOS equipment, which the company now uses solely to create conformal-cooled inserts for moldmakers.

The name "Linear" has been associated with additive manufacturing for years. Indeed, the name has been associated with the brand Additive Manufacturing (that is, us), because the company then known as Linear Mold & Engineering additively produced the 3D aluminum model of our new logo back in 2015 when this publication first became a full-size magazine. Linear was already established in additive manufacturing even then, having begun with direct metal laser sintering in 2006. The capability took the company beyond mold tooling into part-making work for sectors such as aerospace, and led to Linear being acquired by a larger manufacturer, Moog. In 2018, Tenbusch and partner Lou Young bought back the moldmaking portion of Linear's business, accepting the stipulation that the newly re-independent Linear could only sell metal additive manufacturing services to make automotive-industry tooling. 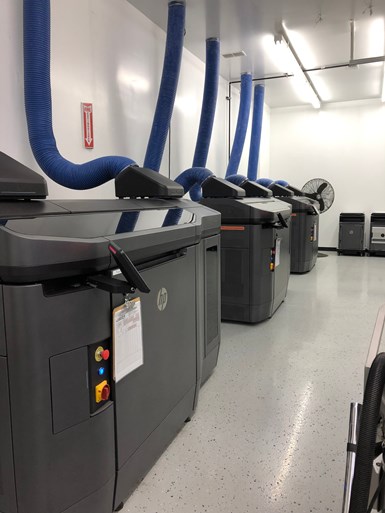 The Multi Jet Fusion 3D printing is the most scalable part of the business. Production is largely contained within the machines, and an ongoing 3D printing job could commit the capacity of a machine or two.

That stipulation was fine with Tenbusch, because for a time it forced him to focus on what had been Linear's specialty in metal AM, mold inserts including conformal cooling channels (that is, non-straight cooling channels following the form of the mold surface for faster part cooling and reduced molding cycle times). The newly independent Linear AMS (the letters stand for "Additive Manufacturing Services") coupled this capability with moldmaking in a conventional mold shop, plus injection molding in a facility dedicated to this, plus polymer 3D printing via Multi Jet Fusion — the most recent capability added.

But in a way, the moldmaking got in the way of the additive manufacturing that Linear was left to pursue. Making 3D printed mold inserts meant selling to mold shops and, "We'd get pushback as a competitor," he says. The restriction to automotive tooling ends in January 2020, so this pushback is not a grave challenge. Still, it revealed eliminating mold machining to be a way to both greater success and greater simplicity.

Indeed, what Tenbusch has learned is that additive manufacturing wants simplicity. “Find the application you know best how to deliver and make it as simple as possible to do it,” he says. On Linear’s EOS metal additive machines, that meant no more maintaining different choices of material. The machines currently run only MS1 steel, no other choice. It also means no machining whatsoever. Customers get a build plate with the tool still attached. These customers are mold shops, so they know how to square the insert to the dimensions they want.

Linear does not do machining anymore, including completing conformally cooled mold inserts such as this one (for a mold related to the appliance industry). Instead, inserts are shipped still attached to the AM build plates. The mold shop receiving the insert cuts it away and fits it into the mold.

In this light, here is how the owner of Linear AMS thinks about his capabilities now, and how he sees the set of capabilities that will help carry the company into the future:

Metal AM continues at Linear as a means of making conformal-cooled inserts. Metal AM applications will expand beyond this, because the company just added electron beam melting capability in the form of a GE Additive Arcam machine for metal part production. But metal 3D printing for conformal cooling on the EOS machines remains a useful specialty. "The automotive tool and die guys understand it," he says. The capability no longer needs to be explained or sold to them. Potential customers show up with thermal analysis data demonstrating the substantial time savings — say, that conformal cooling channels might remove 40 seconds from a 100-second molding cycle. In one application where Linear made the insert for the problematic details of a bracket for a major automaker, the cooling effect reduced the molding cycle time by 53% — "enough to eliminate a mold set," he says.

In other industries using molding, by contrast, the tooling designers do not necessarily understand conformal cooling. Therefore, Linear uses the capability on its own behalf. Its injection molding facility, staffed by 21 people and running 3 shifts, largely serves non-automotive customers. Molding is commodity work, but Linear is able to use conformal cooling as its secret weapon. Adding its own 3D-printed conformal-cooled inserts to its tools allows this molding facility to deliver lower prices for the same molding work compared to competitors.

Linear invested in HP machines as a mold-free alternative method of providing prototype parts. The HP model 4200 Multi Jet Fusion machines are aimed at "production," he says, but that word means different things in different contexts. Production in the automotive territory where Linear lives represents part quantities far beyond what 3D printing can serve, but the number of pieces needed in a prototype run equates to what might serve as production in much narrower markets.

The advantages he sees in 3D printing over moldmaking are these: "You seem to get paid faster for making parts than you do for making the tooling that makes the parts. Plus, if you need to fix something, it's not three guys working all weekend." If a printed part is unsatisfactory or faulty in some way, the solution instead is simply to change the CAD file, run the print job again and walk away.

With the polymer 3D printing, as was the case with metal 3D printing when Linear first adopted this, there is a learning curve. How to nest parts and set printing parameters in Multi Jet Fusion so that a particular build is successful requires experimentation, and — again, like metal — the knowledge that figures into this experimentation and process development is becoming Linear's specialty. Linear's team built this set of parts to illustrate the type of quantities Multi Jet Fusion easily makes possible. This batch of 120 parts was 3D printed in about 16 hours.

"It's a good thing the margins are good,” he notes. “Getting the build right can sometimes take time."

But knowing how to get it right is also a basis for growth, and it is what helps to make Multi Jet Fusion the most scalable part of Linear's business. Any sizable recurring polymer additive manufacturing job could commit at least one machine, maybe more. Tenbusch says the business model resulting from this is therefore simple indeed. Linear doesn’t necessarily have to own the capital. Instead, he says, “We’re able to offer to customers, ‘Buy the machines and let us make the parts.’”﻿