A collaboration between Aerojet Rocketdyne and NASA is resulting in critical parts being 3D printed for new versions of the workhorse RS-25 engine.
#assemblyconsolidation #metal

In May of 2019, NASA awarded Aerojet Rocketdyne a $1.79 billion contract modification for the production of six new RS-25 engines as well as updates to several existing engines that will be used to propel NASA’s newest heavy lift launch vehicle, the Space Launch System (SLS).

NASA and Aerojet Rocketdyne have already completed hot-fire testing of the new RS-25 engines outfitted with 3D-printed vibration dampening devices known as a pogo accumulator assemblies. On their surface, these “pogos” resemble giant metal balloons. Functionally, they serve a vital role as shock absorbers that dampen oscillations caused by blasts of propellants between the vehicle and the engine. 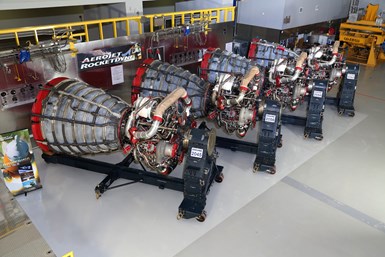 A pogo accumulator assembly stabilizes this so-called “pogo effect,” which makes it critical to astronaut and vehicle safety. In fact, it is this thrust vibration phenomenon that occurred so violently on the Apollo 6 that it shook off panels of the lunar module adapter during flight.

The pogo assembly consists of two components: the pogo accumulator and pogo-z baffle. Aerojet Rocketdyne has additively manufactured both components via powder bed fusion — a feat that eliminated more than 100 welds and reduced costs by nearly 35 percent and production time by more than 80 percent on the pogo accumulator alone. The company turned to EOS and Concept Laser machines for the bulk of its metal AM parts, including the pogo, which it prints with Alloy 718 (also known as Inconel 718), because this high-strength, nickel-based super alloy can reliably withstand operating environments, including  not only high pressures but alsotemperature gradients that range from negative 423°F to more than 2,400°F. 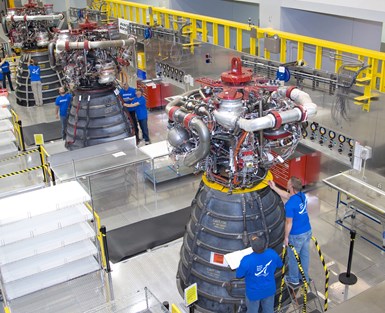 Alan Fung, senior engineer and additive manufacturing team leader for Aerojet Rocketdyne, says that one of the greatest benefits of AM ties directly to the development cycle and lead-time risks that the company mitigates through simulation software and careful machining processes. “When you get into SLM (selective laser melting), or when you talk about these additive processes, you realize, oh, I can increase this blade angle a little bit,” Fung says. “You can do that in development. You can incorporate it and you're not locked into the geometry.”