Profitable AM Is Not an Oxymoron

How a kangaroo, a chest implant, and the cost of argon prompted a question that led to the title for this month’s column. AM's full economic return is found in the overall product bottom line.
#supplychain #implants

While we have all gotten used to working virtually on Zoom and other videoconferencing platforms during the pandemic, we have lost the opportunity for the spontaneous conversations that occur before and after meetings, in hallways, or around the water cooler or coffee maker in the office or at a conference. Fortunately, a failed Zoom seminar happened to leave three of us alone on a Zoom call—and serendipity struck.

You need to focus on the details and scan the horizon constantly in order to make AM profitable – much like trying to find the kangaroos in the background of our Zoom meeting (Image Credit: Alex Kingsbury).

Thanks to the power of Zoom, I have been able to travel the world (virtually) and visit a different country each week as part of the “Additive Around the World” seminar series that I launched at Penn State this Spring. It has been great to “teleport” to different countries without the jet lag and all the air travel, but it is still hard to have a casual conversation with a seminar speaker when there are dozens of other folks listening.

When it was time to travel “down under” to visit with Alex Kingsbury (@AdditiveAlex), the Additive Manufacturing (AM) Industry Fellow at The Royal Melbourne Institute of Technology (RMIT) in Australia, we ended up recording her seminar and then holding an “office hour” for Q&A due to the 14-hour time difference. 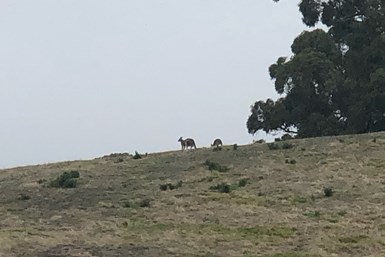 Kangaroos serendipitously grazing in the background of our Zoom (Source: Alex Kingsbury).

While we tried to spot the kangaroos on the hillside behind Alex as she drank her coffee, we realized that none of the students in the course showed up for the Q&A. Looking back, why would they? Rarely did they attend office hours in real life; so, why did I expect virtual office hours to be any different. I mean, how often do you get to meet someone that helped additively manufactured a titanium chest implant for a cancer patient? I thought that would surely draw a few students to the Q&A (sorry Alex!).

Luckily, Alex’s good friend SJ Jones (@Inconelle) joined to support her, and the three of us ended up chatting on Zoom for nearly an hour. We chatted about everything from the changing landscape of medical device regulation in Australia to the exorbitant rate at which argon is consumed in some laser powder bed fusion systems to the latest #AMWTF build failure that I shared from my AM lab at Penn State.

After we grew tired of trying to one-up each other with our worst build failure, someone jokingly asked: how in the world does anyone make any money with AM?  I can’t recall exactly who first said it (I think it was SJ), but eventually all three were wondering if the phrase, “profitable AM” was an oxymoron. It sounds funny at first, but eventually, it left us all scratching our heads a bit, asking seriously: how does anyone actually make money with AM? One build failure in a laser powder bed fusion system can easily cost you tens of thousands of dollars if you aren’t careful.

As Alex shared her story about the chest implant, I learned that many times the costs can simply be passed directly onto the patient for custom implants, for instance, based on the way medical devices are classified in Australia. As the regulatory landscape shifts as it is now, however, so to do the billing and charge rates, and thresholds are established for reimbursable costs. This creates a ceiling on what things can cost if an AM device has to make a profit, but companies like Stryker have figured it out. They have one of the largest installed bases of laser powder bed fusion systems in Cork, Ireland where they additively manufacture titanium hip implants by the tens of thousands each year. Meanwhile, Invisalign makes hundreds of thousands of custom dental aligners every day with 3D printing technology; so, it can be done.

Interestingly, AM service bureaus are also figuring it out; just take the recent acquisition of Morf3D by Nikon as an example. Actually, my first meeting with Ivan Madera was rather serendipitous as we both ended up sitting on a bench in a shopping mall after his 3D printing presentation at a conference. We discussed the challenges he was facing getting the fire marshal and code to approve storing pyrophoric powers in the new start-up he was launching, and now, six years later, he and his team have shown that AM can be profitable, not an oxymoron.

As the joking subsided, our conversation turned serious, and I commend SJ for pointing out that, “successful AM companies are the ones focusing not on the profit made per build, but on how AM adds value to the overall product bottom line in terms of efficiency gains, new material combinations, advanced thermal designs, etc.” Of course, if you follow her Twitter feed, you’ll sympathize with her daily struggles, many of which she attributes to the lack of Design for AM (DfAM) knowledge in the industry.

For Alex, who coincidentally began her AM journey modeling the costs of an electron beam powder bed fusion system, it came down to prototyping versus manufacturing. She agreed that “AM can be profitable, but it tends not to work so well in the realm of one-offs, especially when they are designed by those not so familiar with the particularities DfAM.” I couldn’t agree more, as did SJ, and Alex summed it up by noting that AM can be profitable when it scales, “the development phase is ironed out, build failure points have been addressed, and importantly, everything from the layout to the post-processing can be optimized”.

AM can’t be a “one and done” if you want it to be profitable. You can’t just pick a part and additively manufacture it like I talked about last month and expect it to work. If you do find yourself in that situation, then you have to make sure that that knowledge is transferred to the next design, the next build, the next material you use—not jettisoned when it doesn’t work right the first time or you move on to another project. Of course, smart companies do that, and they find ways to keep serendipity alive because you never know what conversations are going to end up making AM profitable, and not an oxymoron.