While manufacturers are now replacing parts and assemblies with 3D printed components to reduce cost, material and weight, there is still more opportunity to improve the functionality of the design. Robust design and modeling software are critical to realizing this potential.

Most organizations familiar with additive manufacturing (AM) understand that it makes little sense to simply print production parts wholesale that were designed for other manufacturing methods.  The real strength of additive manufacturing is that it allows for the utilization of geometries that are not suitable for manufacturing using other methods. However, most companies do not yet have the knowledge and expertise to design for AM in a way that leverages the full potential of the technology.

This type of “deep design rethink” requires a fundamental paradigm shift from a world where human designers call the shots towards a world where computer algorithms affect major design decisions. Because of this, the design and engineering worlds are currently experiencing a shift from “Computer Aided Design” towards “Computer Generated Design.” Additive manufacturing is the technology that is allowing this tectonic shift to occur. 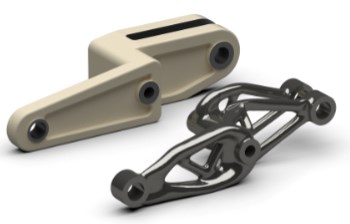 Here an optimized AM part is compared to its conventional predecessor. Optimized geometry saves cost by only using the amount of material required for the functional requirements of the part.

As companies learn what is possible with additive manufacturing, the demand for software systems that can optimize geometry and print previously unrealizable geometry is growing.  Optimized geometry reduces material waste because the amount of material used is only what is required for the functional requirements of the part. Optimized geometry can also aid with the efficiency of the part in its final use, whether that be by reducing the weight of the part or optimizing its function.

Companies are beginning to capitalize on this design freedom by printing parts that are difficult or impossible to manufacture with traditional methods. These types of parts may come from different origins. Some may be assemblies that are combined into a single part. Some may come from generative design operations. But regardless of the origin, they all include geometries that are prime for production using additive manufacturing over other traditional methods.

When HP was designing their 300/500 printer series, they were looking for opportunities to utilize the strengths of additive manufacturing to reduce manufacturing costs, so they worked to identify parts within the printers that might benefit from AM. 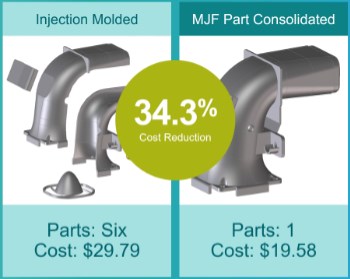 By replacing an assembly with an optimized AM part HP reduced cost more than 30% and shortened delivery time.

One part they identified was a duct used as part of a system to bring cooling air to the print heads. HP realized that if the duct was injection molded, it would take as many as six individual parts along with the necessary assembly steps to produce. However, if the duct was printed using HP Multi Jet Fusion technology, it could be manufactured as a single part, saving them as much as 34% of the initial cost as well as reducing the delivery time.

What HP did not know at the time was that, even though their consolidated duct design was less expensive than a traditionally manufactured design, it was not as efficient as it could be.

The print heads in the Multi-Jet Fusion printer are exposed to high temperatures from the printing process. This heat has an adverse effect on the lifespan of the printer head, so thermal management becomes an important aspect of the design for the HP Multi Jet Fusion printers.

The duct part that HP designed for their 300/500 series printers was part of a system designed for just this type of thermal management within the machine. This system delivers fresh cooling air from outside of the print bay to the location of the printer heads via a fan and a series of ducts.

While the system was optimized for cost through part reduction, it had not been optimized further than one level deep. Through working with Siemens, HP learned that there was still potential for improvement in the cooling system.

The geometric freedom that additive manufacturing enables brings about new possibilities for part design, including the ability to combine multiple layers of optimization.

As mentioned, the duct inside the HP printer had already been optimized for cost by HP during its initial design. However, by using STAR-CCM+ and NX software from Siemens, the team was able to optimize the duct, not just for cost but also performance.

This video shows how the STAR-CCM+ software simulates flow through the 3D printer system.

Utilizing a type of topology optimization based upon computational fluid dynamics (CFD) simulation from Star-CCM+, the team was able to realize a wildly different design for the duct that had a predicted 22% performance improvement in air flow over the traditional design. 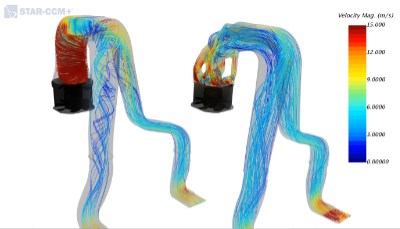 Another positive result of this process was a reduction in the time required to design the part. The original part took four months of design using traditional CAD modeling techniques. But the process of simulation-driven design from STAR CCM+, along with easy geometry refinement using NX, resulted in a final design time of only four weeks for the optimized duct part.

The new design consists of geometry that no human could have conceived of, and this geometry is tuned specifically to the inputs of the HP duct system. Since the design process was based upon a simulation of the flow in the HP air duct system, the result is a highly automated custom optimization solution for a specific set of inputs. Using the same design process on a different cooling system would have resulted in very different geometry for the duct part.

This video shows how duct flow was optimized in STAR-CCM+ and the part geometry was built in NX, and then multiple parts were nested for efficient processing on a HP 3D printer.

The new duct part has now been optimized in two dimensions. The original combination of a multitude of parts into a single part was the first optimization. The further refinement of that geometry into a part designed to optimize the system performance was the second dimension. This type of multi-faceted optimization is only possible with the evolution of modern design and simulation software like NX and Star-CCM+.

Optimizing Designs in Multiple Dimensions Is the Future of AM

As HP and Siemens discovered, to fully optimize a part or system may take multiple levels of optimization. However, using these types of highly automated, simulation-driven tools often results in geometry that cannot be manufactured using traditional techniques. Robust software for design, simulation, and production of additive manufacturing parts is paramount when attempting this type of radical system redesign at an industrial level. As companies learn more about the potential of additive manufacturing for system and part optimization, software like Star-CCM+ and NX from Siemens will be key to enabling these types of multi-level optimization workflows, thereby allowing companies to truly utilize the full potential of additive manufacturing. 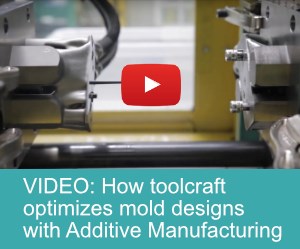 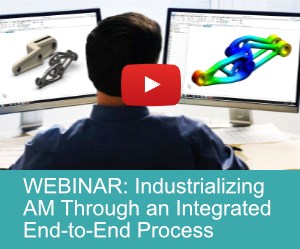