This 3D Printed Turbine Replaced 61 Parts With 1: Here Is What That Means 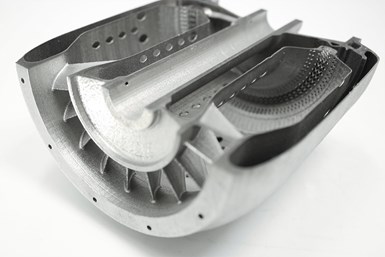 Cross-section of a Sierra Turbines engine combustor highlighting the complexity of the interior. Notice the thin air foils, and smooth lattice that helps the combustor effectively atomize fuel prior to combustion. With traditional manufacturing, this part would have required the assembly of 61 discrete components, but additive manufacturing consolidated it into a unified geometry with fine details and features that are unattainable via any other method. Photo Credit: Velo3D

When we founded Sierra Turbines in 2017 in San Jose, California, we were looking to serve markets hungry for advances in compact, power-dense power generation for applications in auxiliary power units, backup generators and other standby electrical-generation needs.  Another market is that of propulsion systems for unmanned aerial vehicles, both for jet propulsion and hybrid-electric drive-trains.

We had some pretty straightforward design objectives from the start, but they were actually quite lofty when compared with existing microturbines: A 40× increase in time-between-overhaul (TBO, which is typically only 40-50 hours for most small turbine engines, significantly increased power-to-weight ratio, and decreased unit cost compared to machines of comparable power.

The path to achieving these goals required improvements in both design and manufacturing.

Microturbines have historically been simplified versions of their full-size counterparts, but cost restrictions and scalability have until now prevented the adaptation of the complex part geometries found in larger gas turbines. From very early on in our Aurelius microturbine project it was clear that additive manufacturing (AM) was likely the only technology that would enable the freedom to produce complex features that would have been prohibitively costly using machining or welding.

The static assembly of a gas turbine core is an ideal application to showcase the benefits of AM, some of which in this case are:

The Advantages of Part Consolidation with AM

The cost and energy savings resulting from the consolidation of 61 parts into one part cannot be overstated. Production and transport of different raw materials, manufacture of individual parts using different processes, shipping of individual parts, tedious assembly work, joints of dissimilar materials, reliance on extra seals or fasteners, and more: All of this waste is simply eliminated by the integration of many parts into one 3D printed part that requires minimal postprocessing.

Reducing the number of parts has also reduced the number of interfaces between parts, which in turn reduces the number of seals and fasteners required. Also, the reduction of interfaces eliminates potential sources of leakages and losses, which can negatively impact engine efficiency. Finally, all the internal oil and fuel circuits in the Aurelius are integrated into its one-piece static “Unicore.”

This high level of integration required the right AM machine. We found that not all AM equipment could produce the thin-walled, high-aspect-ratio combustor in our Aurelius design. The system we use is the Velo3D Sapphire metal 3D printer. The non-contact recoater blade used in this AM machine allows support-less printing of overhangs down to zero degrees and lower, and this same feature helps allow for our thin walls. The system is able to print in the Hastelloy X nickel superalloy, which is the material of choice for many large gas-turbine combustion chambers due to its excellent oxidation and corrosion characteristics.

With the consolidation of parts comes also the opportunity for novel design solutions. As the designer is freed from the constraints of traditional manufacturing, he or she can instead focus on defining the geometry needed to perform the required task.

For instance, AM enabled a rethinking of fuel spray and flame shape in our combustion chamber. Traditionally, fuel is injected at many points around the diameter of the combustion chamber, and these column-shaped flames are then stabilized by controlling the flow of air around them.

Instead, our design employs a 360-degree fuel injector by which fuel is delivered equally around the entire circumference of the combustor, and atomized while passing through a finely spaced lattice geometry, designed with nTopology software, and only producible with additive manufacturing. The resulting ring-shaped flame is stabilized by strategic swirling of the air inside the combustion chamber.

Efficiency and Decreased Time Between Overhaul

A further benefit of using AM is the ability to create more mass-efficient structures compared with current state-of-the-art turbines. We expect a significant thrust-to-weight ratio improvement over currently available turbines of comparable power.

Finally, and perhaps most importantly, the time between overhaul of the Aurelius Mk1 is projected to be 40 times that of current turbines on the market. This is achieved through the cumulative effects of numerous improvements in bearing design and integration, manufacturing tolerances, lubrication and thermal management features, all made possible by AM. 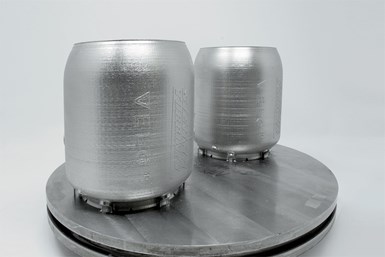 Two 3D printed turbine combustors that serve as the core of Sierra Turbines’ small engine. They are compact enough to fit in the palm of a hand. Additively manufacturing these engine components took about 50 hours versus months that would have been required for traditional manufacturing. Photo Credit: Velo3D

The recently printed geometry of the Aurelius Mk1 core is a work-in-progress that has helped us define what is possible in terms of component integration and “printability” in Hastelloy X. Our work going forward highlights another benefit of additive: It enables development of a product without the burden of large tooling costs or expensive prototypes.

For future gas turbine development, we aim to further leverage the power of AM to integrate features such as an efficiency-boosting heat exchanger, integrated sensors, and more novel insulation and cooling geometries. Whatever innovative designs we come up with, we are confident that advanced additive manufacturing capability can produce it.