This is not something about Nikola Corporation that has the slightest whiff of controversy about it.

Nikola has acquired a large format 3D printer for use in the development of its trucks, the BigRep PRO from Berlin, Germany-based BigRep. 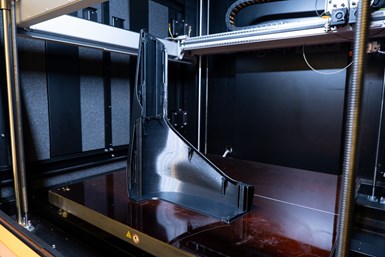 The machine uses the fused filament fabrication (FFF) process, which uses a continuous 2.85-mm diameter filament of material. Among the materials used by this machine are PA6/66, ABS, ASA and more.

It features what it calls “Metering Extruder Technology” (MXT). The maximum material throughput with a 1-mm nozzle is 230 g/h.

It features a Bosch Rexroth CNC motion-control system that uses 32 integrated sensors and IoT connectivity, so there is speed, precision and repeatability in additive processing, which is key when making large components.

Nikola is using the machine for fixtures (assembly, welding and inspection fixtures), printing test components to perform fit checks, and is producing some end-use parts.

Evidently some of the components Nikola is printing are large: “The first prints that we ran lasted 17 days,” Gillman said. He added, “Since then, we have been pretty much running the PRO non-stop to help us print parts and components using its large capacity of printing, high resolution and accuracy throughout the entire process.”

While BigRep may not be as widely known as some other additive manufacturing vendors (at least not in the U.S.), the company was founded in 2014. Among its strategic partners are Bosch Rexroth, Deutsche Bahn, AIRBUS, and Etihad Airways. Investors include BASF and Koehler. It has shipped more than 500 machines.

The company has focused on large-format printers, with its initial product, the ONE, offering a one-cubic meter build envelope.