John Zink Hamworthy Combustion is finding success with Bound Metal Deposition (BMD) for prototypes and replacement parts, but the real promise it sees is in new designs that couldn’t be made any other way.
#metal #prototyping

This 3D printed fuel atomizer for a steam propulsion boiler on a liquefied natural gas (LNG) tanker represents what design manager Jason Harjo calls a “Holy Grail” AM part: an instance where a 3D printable design delivered performance improvements in fuel efficiency that wouldn’t be possible any other way. Photo: Desktop Metal

But the conventional technologies that have served John Zink for decades can sometimes restrict it in pursuit of these goals. The company recently hit such a limit in working on a fuel atomizer for a tanker ship. The atomizer was originally designed to be machined from stock, with straight holes and a simple geometry, but it wasn’t functioning as well as desired.

“The existing fuel atomizer performance was lower than we would have liked, which motivated us to improve the efficiency by improving the design,” says Jason Harjo, design manager. Achieving those design improvements and efficiency gains meant turning away from machining to a different manufacturing technology: metal 3D printing. 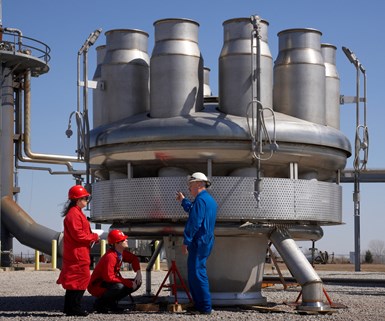 In addition to its in-house metalworking capacity and polymer desktop 3D printers used for tooling, in recent years John Zink has also contracted out some direct metal laser sintering (DMLS) work for part production. Since 2019, however, it has also been utilizing its own in-house metal 3D printing capacity in the form of a Studio System from Desktop Metal.

This system utilizes Bound Metal Deposition, Desktop Metal’s term for a 3D printing technique that builds up green parts from plastic-bound metal powder. The printing process largely resembles that used by John Zink’s polymer fused deposition modeling (FDM) machines; after printing, however, the plastic binder is removed in a debinding unit and the final part dimensions and density are achieved with sintering. The BMD technology makes it possible for John Zink to produce 17-4 and 316L stainless steel parts quickly and at lower operating cost than a DMLS printer.

Since the installation of its Studio System in 2019, John Zink has found a number of value-add applications for the technology. Its first wins were for prototyping, which allowed the company to design and test metal components before moving into production via casting or another production technology.

“Most of our applications are very high temperature due to our clean air combustion technology,” Harjo says. “We have to print in metal in order to prototype and test our different designs in our test center.”

These green 3D printed parts will lose a predictable percentage of their size from the debinding and sintering steps, leaving behind dense metal parts. Photo: John Zink

Given that every system is custom, the ability to print and test dense metal parts quickly has proved to be a particularly valuable application of in-house BMD. But most of these prototypes, Harjo notes, will go on to be produced via casting or machining, which precludes the use of additive manufacturing for its design benefits.

Improving Efficiency in a Fuel Atomizer

Production parts that can be cost effectively made in small quantities via metal 3D printing are the applications where the technology’s advantages can truly shine. The fuel atomizer described above is an example of this, what Harjo calls a Holy Grail: “an additive manufactured part with a significant performance increase that you could not achieve manufacturing it traditionally.”

The original fuel atomizer is a small but fairly simple machined steel part. Fuel and steam are mixed together in its internal chambers, and expelled through round drilled channels. Combustion components like this can be categorized according to their turndown ratio, a relationship that describes the maximum throughput compared to its minimum; higher ratios denote higher levels of efficiency. In its original design, the machined atomizer provided a turndown ratio of 15:1 at low load, when the ship was at port or moving slowly. 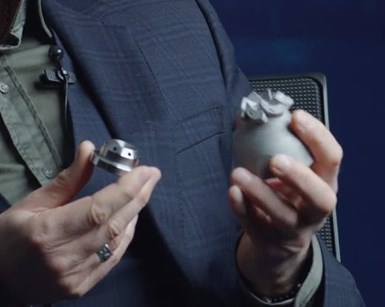 The original fuel atomizer (left) is a machined part with straight, drilled holes. The 3D printed version (right) features kidney-bean-shaped holes and fins to reduce the amount of material at the tip; it has also been consolidated with its base. Screenshot from video, below

To improve the fuel efficiency of the atomizer, John Zink’s team first came up with three different designs that were prototyped using the Desktop Metal Studio System and then tested on site. The most successful prototype from that test was then further refined. The team ultimately consolidated the atomizer with its base to remove the danger of leakage at the joint, and ran the design through computational fluid dynamics (CFD) simulation to finesse the channels. The final redesigned atomizer features air-foil like fins that reduce the total material needed in the part and kidney-bean-shaped channels, a geometry that would not have been possible to build without additive manufacturing.

The fuel atomizer will ultimately be produced externally via DMLS, but Bound Metal Deposition allowed John Zink to arrive at the final design much more quickly plus save time and cost on the initial run. With DMLS the fuel atomizer can be produced in 8 days at a cost of $1,200; in contrast, the BMD component was produced in 5 days and cost just $300. (DMLS will ultimately be used for production, however, because of its speed for making larger batches at once.)

The main advantage of the 3D printable design, of course, is its improved efficiency. The 3D printed fuel atomizer has a turndown ratio of 25:1, a 67% improvement in fuel efficiency over the original machined part. The new design also reduced fuel consumption from 120 to 38 kg per hour; the company estimates that the new design could save $90,000 to $160,000 in fuel costs annually per tanker ship.

John Zink has found many other valuable uses for Bound Metal Deposition, some of which are featured in the video below, such as an aftermarket burner tip first manufactured in 1967 and a safety shutoff device 3D printed for the U.S. Navy. BMD enabled the company to produce short runs of these replacement items cost-effectively while avoiding the expense and delay of casting or machining. But Harjo is still on the hunt for its next Holy Grail project.

John Zink will continue to use its Studio System for prototyping and quick-turn replacement parts like these safety yokes, but is looking for opportunities where a redesign made possible via AM can help make systems more efficient. Photo: John Zink

In addition to improving outcomes for customers, he has another motive: As the leader of the AM Knowledge Network within Koch Industries, it’s his job to help evangelize and explain additive manufacturing technology to colleagues across the organization. More AM wins like the fuel atomizer will help illustrate the possibilities of this technology and get others thinking about how to use it.

“When designing, you want to focus on the end result — if the goal is to burn more efficiently, then you can work backward from that to design and test out different designs and manufacturing methods, including additive,” he says. “The hardest thing about additive manufacturing is getting engineers to free up their minds and break down the paradigms they have about traditional manufacturing.”