A critical instrument on the Perseverance rover requires five components that could only be made via additive manufacturing. Carpenter Additive overcame obstacles to produce them.
#metal #postprocessing #brackets

When the Perseverance rover lands on Mars in February of 2021, it will carry with it a critical instrument that could not have been produced without additive manufacturing (AM). Launched in July 2020 as part of NASA’s Mars Exploration Program, this mission addresses high-priority science goals for the planet’s exploration, including key astrobiology questions about the potential for life on Mars. The Planetary Instrument for X-ray Lithochemistry, or PIXL, is critical to this mission as it will allow the rover to measure the chemical makeup of rocks at a very fine scale, possibly providing clues about the Red Planet’s ability to support life.

Engineers at the NASA Jet Propulsion Laboratory (JPL) designed the instrument package by focusing 100% on the functionality of the components rather than taking traditional considerations toward manufacturability. Only after the team had the optimal design to carry out the required functions did they consider how to produce the components. The created design included features that prevented traditional manufacturing methods from offering a clear path to production. The JPL team turned to Carpenter Additive hoping to take advantage of the design flexibility afforded by powder bed fusion 3D printing to produce these critical components.

Like the rest of Perseverance, the PIXL had to be designed to withstand the stress of launch followed by seven months of traveling through frozen space and then a rough landing on Mars. “Touching down on Mars can best be described as a highly engineered, controlled crash landing, and these parts have to withstand that force and then carry out precision experiments,” says Ken Davis, director of additive technology at Carpenter Additive who led the project. Once there, the Mars rover and its instruments will be subject to 2 years of the planet’s hot and cold temperatures, dust storms and rocky terrain. The PIXL itself is located on the end of the cantilever arm on top of the hammer drill, in one of the most extreme positions on the rover.

The PIXL is mounted on the end of Perseverance’s cantilever arm, and will be used to analyze the chemical makeup of rock on the planet’s surface. Image Credit: NASA/JPL-Caltech

The parts produced by Carpenter Additive comprise the housing for the PIXL instrument. There are five 3D printed pieces in total: a large, thin-walled front cover; a deep, thin-walled back cover; a mounting frame with a hollow box beam structure; and a bench and bench support for the X-ray, both hollow, thin-walled brackets. The parts include varying wall thicknesses between 0.040" and 0.045" (1 to 1.1 mm), and complex surfaces that bulge outward in some areas and inward in others, allowing clearance from instruments both within and outside of the PIXL experiment packet. To ensure the components met the no-fail requirements, Carpenter Additive was required to deliver several of each part; a flight component, a test bench component, and one or more additional for destructive testing analysis by NASA.

The PIXL housing consists of five 3D printed components: thin-walled front and back covers, a hollow mounting frame, and the bench and support for the X-ray. Images: Carpenter Additive

The PIXL and its housing also had to adhere to an assigned mass budget. All components were collectively required to stay below an absolute weight maximum, otherwise the rover wouldn’t be able to launch. Any exceeding weight on the critical instrument could cause other experiments to be dropped, so mass budget was repeatedly the top consideration when weighing possible design changes throughout the process.

Process Based on Powder-Bed Fusion

Because it is a hot process, the electron beam chamber keeps the component packed in powder at a high temperature during the multi-day build and cools slowly over 12 hours, helping to remove residual stresses that could distort fine features. Additionally, as the powder bed itself is semi-sintered through the process, it can act as a support structure during the build. For the PIXL components, this eliminated the need to print attached supports and the risk not meeting the very tight tolerances required by the application specs. “Often, when we evaluate the two technologies there is a clear ‘winner’ for manufacturing, but this was a tight race throughout, with EB-PBF winning by probably an unofficial 52/48 margin,” Davis says.

The mixture of strength and light weight needed dictated the use of titanium, and Carpenter’s Ti 6Al-4V Grade 5+ was chosen for its improved mechanical properties. The material’s higher strength and good ductility provided a minimum 135-ksi yield strength at minimum 15% elongation in the highly stressed, very thin parts.

“It was a long journey of mechanical processing followed by inspection, but because of all the fine features we had to know if or how much we were deviating from the final part model to track our path forward,” Davis explains. “We used our hot isostatic press to homogenize the microstructure, but it’s a high temperature process that could distort the part, so we had to go back to the 3D scan. Deburring and grit blasting smooth the surface but can change dimensional features, so we go back in for inspection.”

Expert understanding of each process step plus its potential to introduce deviations from spec, and how each step affects the next, was essential to the successful construction of the part family as the team overcame challenges along the way:

The electron beam powder bed fusion process is a complex sequence of heating, expansion, melting, consolidation, solidification and shrinkage. This is not, however, a linear process and the team had to develop scale factors as the average values derived from comparing finished dimensions to model dimensions. Build temperature falls during the initial layers, then recovers during the build while top layer temperatures continue to increase in tall builds. This causes varying part temperatures throughout the build chamber. If these scale factors are not fully understood, and the part designed with this in mind, features may start to grow away from the model and be stretched out of tolerance.

Because components are often rotated within the powder bed for the optimal printing orientation, the parts were not uniformly “scaled” in each orthogonal axis. One axis dimension on the component is a compound of several axes in the printer, so several scale factors of X, Y and Z contribute to the dimensional accuracy. The thin walls of the PIXL parts created a very low thermal mass compared to components typically made with electron beam melting, and proved to be a challenge in re-scaling causing initial parts to be “over scaled” and printed too large. However, learning this lesson on the first part allowed the team to apply the knowledge to the other components, speeding up the iteration process moving forward.

To ensure components met the no-fail requirements, the Carpenter team was required to deliver several of each part; a flight component, a test bench component, and one or more additional for destructive testing analysis by NASA. These two front cover components are on their way to HIPing. Photo Credit: Carpenter Additive

Permanent and semi-permanent rigid supports were the focus of much experimentation throughout development. During the powder bed fusion process, supports act as thermal shunts to dissipate heat and allow rapid solidification of the melt pool; they prevent part movement or distortion from thermal stresses; and they support overhanging features. Semi-permanent supports were employed to protect parts through several postprocessing operations to prevent the distortion of thin-walled structures during HIPing, allow for clamping during the machining of critical surfaces and to hang parts in chemical milling.

A semipermanent support structure was added to some parts like the PIXL frame to support the pieces during postprocessing steps. Photo Credit: Carpenter Additive 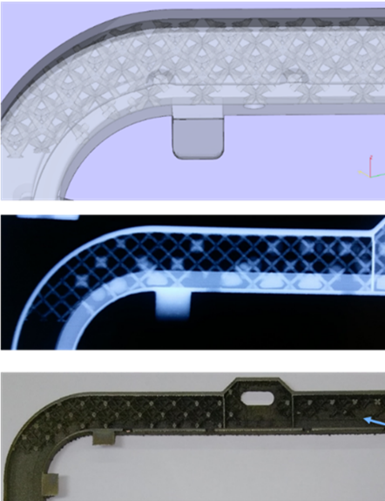 The box beams of the frame created a challenge because, regardless of orientation, one beam would always be perfectly horizontal requiring the top surface to be supported inside the hollow design. However, the design only allowed for 5-mm extraction holes for any internal material. After much experimentation with removable options, permanent supports were integrated into the design with the concession of a few grams to the mass budget. A lattice structure was 3D printed on one leg of the frame after experimentation and optimization of the lattice to ensure it would survive printing, machining and its mission on Mars. The results determined by experimentation on the box beams were important for the much larger frame component, again allowing the team to speed up their iterations through lessons learned.

Extraction of any residual powder is critical to avoid introducing a potential source of foreign object damage (FOD). The design of the hollow X-ray bench support provided only small holes as access to internal powder. No changes to the size or location of the holes was possible since their design was dictated by the load path, so an advanced powder extraction technique was required.

The PIXL components were the most challenging Carpenter Additive had encountered. A part re-design was not possible, and tolerances could not be opened due to the critical mass budget. A total of 0.077 oz (22 grams) was ultimately added to the 16-pound (7.26 kg) construction, within the margins to improve manufacturability.

The team at Carpenter Additive was successful at developing the final assembly components within the defined parameters, although many iterations were required along the way as even additive manufacturing faces challenges on the long path to manufacturability. The demanding journey was completed in 18 months rather than the hoped-for six, as the team iterated to fail fast, learn and establish new best practices from these successions, and implement improvements at every stage of production from material selection and printing to inspection and machining.

By February 2021, these components will arrive on Mars to support mission-critical, pioneering measurements of the chemical makeup of our neighboring Red Planet.