Kevin Quinn, GM director of Additive Design and Manufacturing, talks about why teaching people about additive is important to the OEM’s efforts to advance the use of the technology

In June 2019, Kevin Quinn, GM director of Additive Design and Manufacturing, says the company opened what they’re calling the “Additive Innovation Lab” within the Cole Engineering Center, which is on the campus of the GM Global Technical Center in Warren, Michigan.

This is not, he stresses, a transactional place, where designers, engineers or manufacturing personnel come to order a part for one of the programs they’re working on.

Rather, Quinn explains, the purpose of the 4,000-sq. ft. facility is “really focused on the educational piece of additive. This is about getting hands-on learning for our engineers and anyone interested in learning about additive. It drives more knowledge, which drives more applications.” Additive, Quinn says, can “allow people to do things better and more efficiently—potentially.” 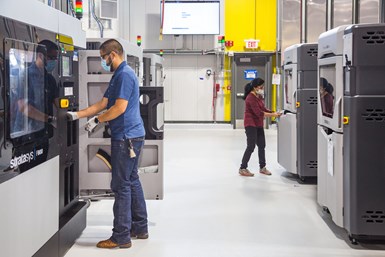 Although the Additive Industrialization Center was still being built out on the campus of the GM Tech Center in Warren, the company put it to work producing components and tooling for PPE and other COVID-19 response equipment. (Image: Jeffrey Sauger for GM)

Quinn adds, “It is not for everything. But there are lots of opportunities for people to take advantage of.”

So the Additive Innovation Lab is a place where people—and there were over 700 people who had been certified during the first eight months it was opened, as COVID-19* reduced the number of people on campus at the research complex—can learn: “It is about hands-on learning. The people run the machines themselves so they can really, truly have in-depth learning and knowledge about what it can and, frankly, can’t do.”

Although there is plenty of buzz about additive, the objective at the lab is to bring GM personnel to a better understanding of what’s real, not hype.

“When they go back to designing parts they know when they can use additive, when it will help their development process,” Quinn says.

The lab is comprehensive in its scope, with 14 machines on site. These are:

Quinn says, “We want to get the people exposed to different technologies. We don’t have every single technology in there, but we do have a good cross section.”

One thing that is important to at least some of the interest in the lab: Quinn says that it is located right next to a Starbucks, which provides a considerable amount of foot traffic.

GM has a network of additive operations of which the lab is just one node. According to Quinn GM’s additive efforts began some 30 years ago at the Tech Center in what was then creative design operations. Now it is a full-blown additive operation with larger machines from companies including Stratasys and 3D Systems for printing large parts and multiple quantities. “This is not an educational facility,” Quinn says.

The company is also preparing to open its Additive Industrialization Center at the Tech Center late in 2020.

There are also additive machines distributed at manufacturing facilities around the world that are being used to print tools, jigs and fixtures and the like. “We will support the operations out of Warren if we need to,” Quinn says, “but we like to get the equipment where the action is.”

Quinn acknowledges that the technology has largely been used at GM for prototyping rather than for manufacturing. Benefits include the ability to find issues before production tools are manufactured. 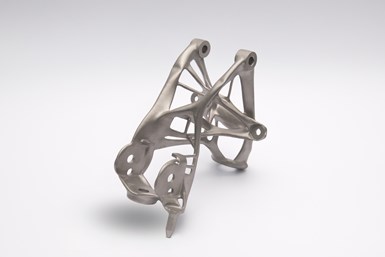 This is a seat bracket design that GM developed with software provider Autodesk in 2018. The organic shape is a result of an approach known as “generative design,” which allows materials to be placed where they are required for structural purposes. Compared to a conventional bracket it is 40% lighter and 20% stronger. Given its form, it is a natural for additive manufacturing. (Image: GM)

He says that the advent of metals and other materials that are “more production-like” are allowing them to perform “more functional evaluations of components.”

Perhaps the most notable example of this is the development of the C8 Corvette. “It was very important for us to have an understanding about the build of the vehicle because it was a new architecture, so we wanted to learn the process early.”

Approximately 75% of the parts that went into the first physical vehicles produced were made with additive. Quinn says that they performed something of a mock build, having people from the Corvette plant come to the GM Tech Center so that they would be able to determine whether and how the pieces would come together in the Bowling Green Plant before the tooling and equipment were locked in for the sports car. The physical, printed pieces allowed a determination of manufacturing feasibility.

Additive also allowed the build of right-hand drive versions of the IP and the retractable hardtop so the engineers and designers could analyze both before the tooling was produced.

In some regards, the Corvette project was something of a hybrid between prototyping and production.

However, GM is making a significant number of finished parts with additive—although these are parts that are being used to manufacture vehicles. “We supported the recent SUV launch in our Arlington Plant with about 100 different fixtures in the body shop,” Quinn says.

One interesting aspect of using additive for things like jigs, fixtures and tooling is that they’re often better than those they replace. That is, Quinn points out that locating fixtures or assembly aids used by the operators on the assembly line used to be machined steel aluminum pieces that were then welded or bolted together to the finished tool.

With additive the component can be produced in a single piece (eliminating the assembly steps) and because of the inherent design freedom offered by the process, more ergonomic for operator use. In addition to which, Quinn says there can be a cost advantage to producing these tools with additive rather than through traditional methods.

The Steps Toward Production

Speaking of the nature of the auto industry in general, Quinn says, “We like to build a lot of something because of the tooling bill.” It’s all about economies of scale. If that mold or die is going to come with a big invoice attached, then it had better be used to make mass quantities in order to amortize that cost.

Which, obviously, is not the case with additive. However, there is the issue of traditional stamping or injection molding being able to make parts much more quickly, thereby lending themselves to mass manufacturing in a way that additive doesn’t.

That said, there are places where there can be serial production performed with additive in a cost-effective manner in automotive.

Service parts, for example. Quinn explains that there are cases where the company had thought it had a sufficient number of service parts on the shelf for older vehicles only to find that they didn’t. If the part in question had been provided by a supplier, it could be that the supplier has gone out of business.

So the question becomes whether, in order to make 50 to 100 parts, they build a new die or mold or 3D print. And chances are, the additive answer pencils correctly.

Then there are accessory parts. Quinn says they represent an opportunity where the OEM can offer “more options without huge capital investments.” It may be something comparatively simple like a badge, but it can still garner benefits to the company.

Quinn says that while he doesn’t know whether additive will get to a capability such that as required in, say, a truck plant (e.g., at the aforementioned Arlington Assembly Plant they are producing some 1,200 full-size SUVs), he does think that it allows things like creating more trim levels for a vehicle because there wouldn’t be a need to commit to a huge capital expense in order to achieve differentiation.

In terms of what Quinn would like to see is, not surprisingly, faster machines—double or triple what the norm is right now. He acknowledges, however, that because auto is not the aerospace or medical industry, where the volumes are lower than is the case in auto and the margins are a whole lot higher,  there tends to be more equipment and process development focused on those industries.

What’s more, Quinn says that while additive-related companies have done a lot of work on metals including titanium and Inconel—a.k.a., medical- and aerospace-oriented materials—he would like to see more work done on aluminums and steels, automotive-grade materials.

*It is worth noting the as part of GM’s response to the COVID-19 pandemic there is an extensive use of additive manufacturing capabilities to produce equipment and protective gear. That is, the assembly tools used to produce ventilators that GM is partnering with Ventec Life Systems with and collaborating with Hamilton Medical are printed. Printers are also being used to produce face shield components and ear savers for protective masks.