The “Fun Utility Vehicle” from Arcimoto is already in production, and already lightweight. But after just 30 days of redesign for additive manufacturing, the company discovered major components could be made lighter still, and production could be made simpler.
#assemblyconsolidation #metal #generativedesign

I can attest to the fun. I got to drive the Fun Utility Vehicle (FUV) during my visit to Arcimoto in Eugene, Oregon. The company has developed a vehicle tailored to the most common ways we drive our cars. Now the FUV needs parts tailored to their purposes as well, as this article describes.

Take a look at the road outside your home. Even if it is just two lanes, that road is probably about 20 feet wide. Now consider that, for the most part, all that width exists simply to allow one person to pass another person headed in the opposite direction. Nearly all car trips are single-person drives, so two-lane road widths accommodate just two people. Long before we ever spoke of social distancing, the bulkiness of our cars was already keeping us spaced far apart, and road design had to allow for the spacing. Now, multiply the asphalt this ample road width requires by all the neighborhood roads all across the landscape. How much more green could we see, how much land could be set free, if only cars for short drives could be much more slender? And how much more sustainable would driving be if the mass of cars better fit the requirements of our trips? 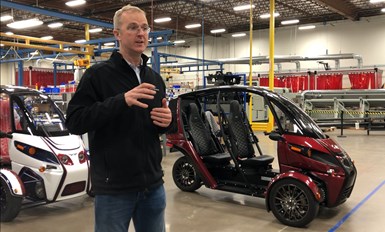 Mark Frohnmayer is Arcimoto’s founder. “We are not trying to change people’s behavior,” he says. “We are just trying to build a much better tool for the job they are already doing.”

The promise of addressing inefficiencies such as these is part of why Mark Frohnmayer founded Arcimoto, a company that has developed an altogether new automobile design, the “Fun Utility Vehicle” or FUV. This narrow, two-person, street-legal electric vehicle was developed for the short and routine trips that account for almost all of the reasons why we use our cars. 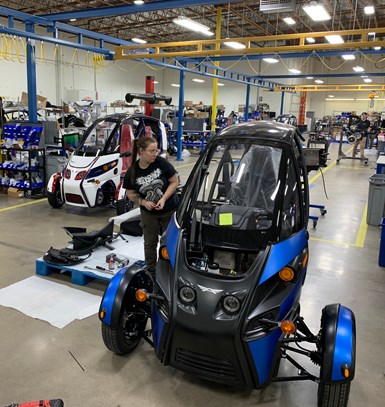 The FUV has been in full production since last year. The vehicles are made in the company’s factory in Eugene.

Now, additive manufacturing (AM) seems likely to make this car better. That is, AM will make it even more energy-efficient, as well as being easier to manufacture within Arcimoto’s factory in Eugene, Oregon. Frohnmayer had seemingly reached the limit in his aim to get the weight of the car down to 1,100 pounds — it went into production and went to market weighing 1,300 pounds — until an encounter with an additive manufacturing expert showed him new possibilities. Redesigning certain components of the car through generative design promises to cut weight, and also simplify production by consolidating what used to be weldments into complete, solid parts.

In this photo and in images to follow are suspension parts redesigned via generative design. This hub carrier and steering knuckle went from a nine-piece steel weldment weighing 2.7 kg to a one-piece 3D printed steel form weighing 1.7 kg. There are two of these parts per FUV. Photo: Paramatters.

What Drivers Really Do

Arcimoto has been working toward the FUV, which went into production only late last year, for over a decade. The car has moved through various iterations, but Frohnmayer’s vision for what he wanted the company to be able to bring to drivers and cities has not changed.

“Cars are amazing; they carry five to seven people hundreds of miles at a time,” he says, “but there is a giant disconnect between what a car can do and how we actually use them on a daily basis.” Rather than five to seven people and hundreds of miles, he notes, 90% of car trips carry one or two people (79% are solo) and strictly in-town trips are the norm — the average amount of driving is 30 miles per day. “That disconnect creates a massive amount of inefficiency,” he says. It wastes space (roads and parking lots), wastes time (from traffic congestion and finding a place to park) and wastes energy (because of the fuel needed to move vehicles that are way too big for our trips).

But what to do? Between conventional automobiles and golf carts, there essentially was no intermediate ­—­ no answer to the disconnect he describes. The FUV fills this gap. The two-seat car can travel about 100 miles on one battery charge thanks to regenerative braking contributing to the charge life, and it features speed and acceleration for in-town driving and heated seats and grips for comfort. A cargo box provides space for the kinds of purchases and packages we usually transport on our trips, because, again, most trips do not require the car trunk’s entire volume. 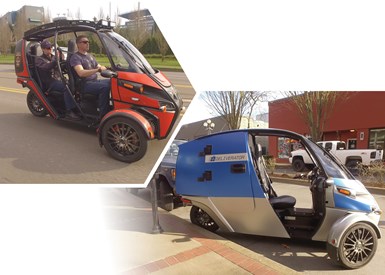 “We are not trying to change people’s behavior; we are just trying to build a much better tool for the job they are already doing,” he says. And a much less expensive one. Sticker price for the FUV is $19,900 and a base model at a lower price is under development. Meanwhile, a version of the car has been introduced for first responders such as paramedics, and another version has been introduced for delivery, replacing the second seat with expanded cargo capacity.

These vehicles are all made in Oregon, with production processes including machining, welding and assembly all occurring within the company’s Eugene factory. By March 2020, the company had manufactured more than 100. The production processes were not necessarily optimized, the company discovered, because the part designs were not necessarily optimized. Indeed, Frohnmayer recently made the surprising discovery that his answer to cars being oversize for their purpose currently includes parts that are themselves oversize for what they need to do.

It took finite element analysis and additive manufacturing to reveal this to him.

That discovery about overweight parts came because of another entrepreneur. Avi Reichental, former CEO of 3D Systems, is a co-founder of various startups related to additive manufacturing, including ParaMatters, a cloud-based design platform that includes CogniCAD software for generative design. Reichental met Frohnmayer at a fundraiser event last year and had his first chance then to drive the FUV. Frohnmayer told Reichental of his aim to make the car lighter, and the latter offered his guess that some of the FUV’s parts were probably oversize. Some of the visible suspension components clearly seemed bulky for their purpose. Reichental decided then to join with Arcimoto’s effort to improve the car, seeing how much farther AM might take the weight reduction. The effort has only just begun, and it started with these suspension components. Here is the generative-designed rear swing arm installed on the FUV. Photo: Paramatters.

The parts in their current form had been designed and made the way parts like them have almost always been designed and made, with the design engineer choosing their shapes according to the most direct form for making the connections, and with welding then used to physically realize this design. Little consideration was (or could be) given to weight.

By contrast, in generative design, the designer does not choose the form. Instead, the designer steps back from this level of engagement, defining instead just the requirements of the part including connection points, material and the loads the part must carry. Iterative computation via finite element analysis then realizes the form able to deliver these requirements using the least material and mass. The kinds of forms that result from designing this way are counterintuitive, even startling in the extent to which they depart from the industrial in favor of forms found in nature instead. Nature, it would seem, also designs iteratively in order to advance toward an optimal form. 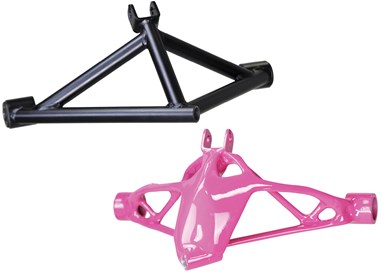 On the upper control arms (two per FUV), replacing the steel weldment with cast aluminum led to a slight weight savings of 200 g per part. The greater savings here is in the cost reduction of eliminating the welding step. Photo: Paramatters.

Reichental says, “We always hear, with additive manufacturing, ‘complexity is free,’ but why aren’t we unleashing this freedom? The answer is traditional CAD tools don’t quite get us there. So what our system does is put design algorithms on the cloud, to allow some of the heavy lifting of computation in arriving at a generative part design to happen within 10 or 15 minutes.”

Additive manufacturing and generative design go together because the resulting forms often can only be produced using AM. Certainly this was true with the FUV suspension parts that so far have been redesigned with CogniCAD. Left- and right-side hub carrier and steering knuckle parts 3D printed in MS1 steel on an EOS direct metal laser sintering (DMLS) machine together save 4.4 pounds compared to the nine-piece weldments they are able to replace. Other parts — the left and right upper control arms and the rear swing arm — were too big for the available DMLS machine, but still used AM. A Sharebot fused filament fabrication (FFF) 3D printer made polymer versions of these parts for use as sacrificial patterns in investment casting of aluminum. The additive-enabled generative-designed castings saved an additional 7.9 pounds over the parts they are able to replace.

The components have not yet been adopted into production. The search for weight savings through additive has only started, and the successes with suspension parts represent the fruit of only the first 30 days of the effort. What these successes have shown is how much bulk there is to remove, and how easy it is to find that excess weight, even within a product that already seemed to be streamlined.

And the same is true for a manufacturing process. The Oregon factory is cleanly organized, compact, fast and lean, but are the operations here as efficient as they could be? In seeing the success of generative design and additive manufacturing, Frohnmayer is struck by the potential not just for weight savings but for simplifying production. He cites the rear swing arm as an example. 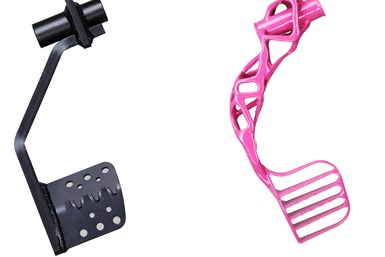 Optimization via generative design continues. Here is a more mass-efficient gas pedal. On a future version of the FUV, it is likely that drivers will not only see generative-designed parts, but also directly interact with them. Photo: Paramatters.

“Today this is an 11-piece weldment. But if we can print a tool and cast that as one piece, this gets us to a faster and easier process,” he says. “If we can apply this same solution to other weldments and assemblies, this is an optimization pathway for manufacturing.”

In other words, this is optimization of a different sort. The potential of generative-designed additive parts to consolidate steps and reduce effort in manufacturing potentially offers so much cost savings that in the case of some parts, the weight savings might be just a secondary benefit. Cost offers yet another opportunity for streamlining, and another area in which unneeded bulk can be removed.

Arcimoto’s lightweight “Fun Utility Vehicle” gets even lighter thanks to parts that could only come from additive manufacturing. On this episode of The Cool Parts Show, some of the craziest automotive parts you have seen. WATCH