Tooling & Equipment International (TEI) once made tooling for production foundries, but now its focus is on leveraging its own tool-making capability (including sand 3D printing) to provide low-volume and prototype castings like this engine block. Photo: TEI

“In the early days, before numerically controlled machines, casting tools were made by highly skilled pattern makers carving mahogany into patterns and packing sand around them,” says Oliver Johnson, president of Tooling & Equipment International (TEI). “You’d be talking six or nine months to make all the tooling for a part that we could do today with a 3D printed mold in two days.”

Founded in 1918 as Automotive Pattern, TEI has witnessed the major changes in casting technology alongside its own transformation. For most of its history the Livonia, Michigan, company has focused on providing tooling to production casting facilities, first using hand tools and later CNC machines to make patterns, cores and cavities. Its own small foundry was used only to test the tools that would be passed on to these customers — but this focus has recently changed.

“Now, we don’t make tooling other than the tooling we need for our own processes,” Johnson says. Over the last 10 years, TEI has converted its test foundry into a full-fledged manufacturing facility for prototype and low-volume production castings. Sand 3D printing now provides the majority of the molds for this work, designed with the help of simulation software. Casts are computer-controlled for consistency, and the company’s CT and X-ray scanning capability helps to ensure quality. This is casting gone digital, and it’s these advances that have helped TEI condense the timeline for a cast part from months down to just days.

TEI’s specialty today is cast metal parts, primarily aluminum, in quantities ranging from 1 to 5,000, Johnson says. Its capabilities include in-house heat treatment, a machine shop and an inspection lab in addition to the foundry. The company serves the automotive industry, centralized around nearby Detroit, but also the aerospace, defense, energy and telecommunications sectors. Most of the parts it makes are test parts, like a component for a car subframe needed for crash testing before the automaker invests in a mold for full-scale production.

The company has been utilizing sand 3D printing since 2004, but has come to rely on this capability in transitioning to a production facility. Rather than build a form and pack sand around it by hand to form a mold, sand printing enables TEI to simply print the mold directly. The process uses a print head to deposit droplets of binding agent across a bed of sand, fusing the material together. 3D printing enables more complex geometries than hand-built molds and also makes it possible to condense and consolidate mold assemblies. In one example, TEI was able to redesign the tooling for a helicopter gearbox, reducing the number of sand cores from 78 to just five printed pieces, eliminating many joints and reducing assembly for the mold.

TEI’s Voxeljet VX4000 uses a binder jetting process to fuse sand into cores and cavities for casting. The large-format sand printer allows TEI to build tooling for very large parts or for many smaller molds at once as shown here. Photo: TEI

TEI today has the largest sand 3D printer in the United States, a Voxeljet VX4000 with a build envelope that measures 2 meters wide and 4 meters long. The printer head sits on a gantry that can travel up and down this build volume, depositing binding agent wherever needed. This flexible printer allows TEI to build large molds when necessary, or many small molds at once; the job box can be created along with the print, allowing it to be as large as it needs to be. For smaller jobs, the company also has an ExOne binder jetting system with a 1 by 1.8 meter build volume. Finished sand molds are unpacked by TEI’s expert pattern makers, cleaned of loose sand, and ready to use.

To design and simulate these molds, TEI uses EKKcapcast, software specialized for the metal casting process. The software allows the company to iterate mold designs quickly and test them before ever building a physical tool, a necessity for the kind of small-batch and quick-turnaround work it does today.

“Sand printing in the early days was very expensive, and so the traditional way of developing prototypes, where you’d have a foundry doing trial and error, was just too expensive,” Johnson says. “But we put that printing technology together with simulation. We can simulate the whole process of filling the mold with aluminum and then see how the material solidifies. Instead of doing all the iterations of testing with expensive 3D printed molds, you do it on the screen. You can do 10 iterations in a few hours and then you finalize your design and 3D print the entire mold.” If there are needed design changes, TEI can easily reprint the mold.

Despite the digitalization of TEI’s casting process, some steps still require a skilled touch. Cleaning the sand molds is a delicate task, performed by expert pattern makers. Photo: TEI

TEI’s combined simulation prowess and 3D printing capability helps shorten the lead time for tooling, making it faster, cheaper and easier to go from CAD design to metal casting. But prototype castings still need to be functional, and to function at the same level as their eventual mass-produced counterparts.

One way that TEI controls the quality of the final part is by automating the pour, with a technique called low-pressure casting. “Instead of manually pouring the aluminum, you pump it in with a computer controller,” Johnson explains. “We can fill the molds very fast in a controlled way, and then pressurize them throughout the solidification process to eliminate any porosity. It’s identical every time we cast, [with even temperature controlled] within one degree Celsius.”

This automated process results in a high-quality casting with good material properties — actually, properties that can sometimes be too good. For jobs like prototype crash test components, TEI has to make its prototype sand castings match the material properties of a steel die casting, the process that will eventually mass produce these automotive parts.

“Our goal is to supply prototypes that match the production process as well as possible.”

“High-pressure die castings for automotive body components are very ductile, so we’ve had to develop ways of achieving the same kind of ductility in a sand casting,” Johnson explains. “The sand castings are typically very strong. We use different alloys and heat treatments to ‘dumb down’ those properties to make them much more like the lower-strength die castings.”

The same is true for any prototype part that might be made differently in production. TEI works backwards from a customer’s target properties to select the proper material and heat treatment from alloys and procedures it has developed. “Our goal is to supply prototypes that match the production process as well as possible,” Johnson says.

Probably half of the parts that TEI produces will end up being high-pressure die castings in high-volume production, but the ability to cast them in sand first allows for design optimization without an upfront investment in steel tooling. Developing the tool for a large vehicle subframe or chassis could take up to 8 months and cost upwards of $1.5 million, Johnson says, whereas TEI could deliver the part itself in just 2 weeks using 3D printed sand molds.

Closing the Loop with Nondestructive Testing

Regardless of whether the casting in question is a prototype for a crash test or a part for an end-use application, its digital thread doesn’t end with the computer-controlled pour. After the sand is broken off, castings are inspected using various nondestructive testing (NDT) methods in combination with software, based on the detail needed and quantity of parts. 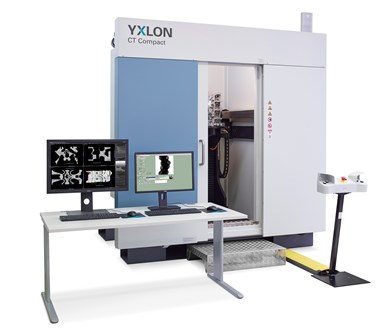 For prototypes and other low-volume applications, TEI is more likely to turn to its Yxlon CT Compact system, a CT scanner designed for medium to large cast parts. The compact system has a high-energy source enabling imaging of high-density parts including aluminum castings up to 9.9" (250 mm) thick. This capability is primarily leveraged to look for defects in castings and where measurement of internal features is needed. The CT data is loaded into VGStudio Max from Volume Graphics, where it can be overlaid onto the CAD and analyzed against the intended outcome.

“That’s how you really close the loop,” Johnson says. “The simulation tells you what should happen, and then the CT scan tells you exactly what did. You can confirm what’s in the casting without cutting the part up.”

For larger runs and production parts needing 100% inspection, TEI utilizes an X-ray system (also from Yxlon) that can be programmed to move both the X-ray detector and source to rapidly capture any and all needed features. If an issue is found in a particular casting, the machine can even prompt the operator to check each reference image for that particular spot. Those images are also stored in a database and shared with customers; each casting, machined or printed part has a serial number connected to its full history, including chemistry, heat treat, and X-ray or CT scan data for complete traceability.

TEI’s combination of software, 3D printing and inspection capability means that it can move much more rapidly and take on a greater diversity of work than was possible in the past. The company today engineers about four new products every week. A certain percentage of its capacity is also dedicated to what Johnson calls “emergency manufacturing,” or quick-turnaround jobs when a problem arises or a customer simply needs a part on an accelerated timeline. (Its emergency response was recently tested during the coronavirus pandemic, when TEI was commissioned by GM to make ventilator parts using its machine shop.) 3D printed sand tooling enables TEI to make parts quickly, while simulation capability allows it to do so accurately and confidently.

For large quantities of parts TEI will make conventional tooling, as it’s still cheaper to pack sand around a pattern than it is to 3D print the mold directly. But this gap is closing, Johnson says. Simultaneously TEI has seen an increase in metal castings of complex, even generatively designed parts that would not be possible to make without 3D printed tooling, and it expects to do more of this work in the future.

There is another trend TEI is watching as well: metal parts that don’t need tooling at all. The company currently machines and inspects some parts from aerospace customers that are made directly via metal 3D printing, a role that gives it special insight into the quality and promise of these components. “There will come a time when customers are designing parts that can only be made through 3D printing,” Johnson says. If that is the case, TEI’s digital workflow leaves it well-positioned to perhaps transform once more.