Three functional components are 3D printed thanks to cost savings and design freedom. Layers lines on the shift knob signify this advance.
#brackets

Additive manufacturing (AM) for full-scale production at the part quantities major automakers see is still a way off. However, General Motors sees that day coming, and is getting ready by seeking “pathfinder” additive manufactured parts that will allow the company to start facing and answering the questions that come from applying 3D printing for production. Far off though it might be, AM for automotive production is also near enough and viable enough that the parts GM found did not have to be subsidized. The company’s 2022 Cadillac Blackwing V-Series cars — the most powerful Cadillac models ever introduced — are also the first GM vehicles to use AM at production scale. The manual-transmission versions of each of the V-Series models has three functional components made through 3D printing, and AM paid its way in each case. It offered GM the most cost-effective way to manufacture each of these parts. 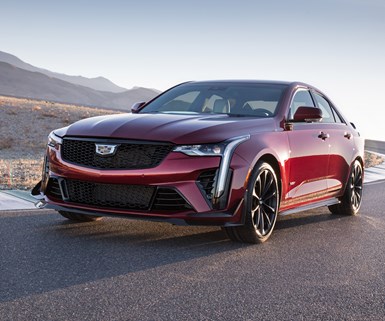 Not a car for the typical driver: The 2022 Cadillac Blackwing CT4-V, seen here, is a higher-priced, track-capable vehicle. Low production volume relative to what is typical for automotive accounts for why 3D printing was the most cost-effective process for some components. Still, GM is using its experience with this car to prepare for the day when more capable 3D printing will mean that many more production parts are made this way.

Production volumes that are low for automotive make this possible, notes Ali Shabbir, product application engineer and global innovation lead in additive design and manufacturing for GM. The Cadillac Blackwing is a track-capable car — usable for street driving, but also engineered for top speeds in the vicinity of 200 mph. The parts made additively for this car might not have been cost-effective to produce this way at the scale of one of company’s more standard cars. Still, the suitability for Blackwing production is a mark of 3D printing’s progress so far: First (decades ago), it was accepted for prototyping, then it became a means for making production tooling, and now it is an appropriate choice for end-use part production at lower quantities. GM is developing habits, experience and expertise in production AM because of its expectation that this trajectory will continue.

The gear shift knob tells the story. 3D printed layer lines were kept deliberately visible in the design of this medallion on the gear stick, to commemorate the car's place as the first GM vehicle to use AM for production parts.

The 3D printed parts on the Blackwing models are these: two nylon-12 HVAC ducts, one for the rear cabin and one for the car’s phone charger, both made via HP’s Multi Jet Fusion process; plus an aluminum bracket made from laser powder bed fusion for securing a wiring harness to the body of the manual transmission. A fourth 3D printed part, a medallion on the car’s gear shift knob, is for show rather than function, but what it shows is important. The aluminum part is made through binder jetting, and it preserves some of 3D printing’s layered texture to proudly mark the car’s pioneering place in GM’s advance into production AM. (The medallion also has unseen conductive fins preventing it from getting too hot to touch on a summer day — geometry that 3D printing also made easy to incorporate.)

Of all these parts, the wiring bracket arguably goes the farthest in demonstrating the transformation that is possible with AM. The form, process and material for this part all significantly changed, notes Shabbir. “Initially, the part was designed to be a sheet metal stamping,” he says. Doing away with stamping tooling made additive the less expensive process, while attention to design for additive manufacturing (DFAM) made the 3D printed version as economical as it could be. “By tuning in the design, we were able to eliminate the need for heat treat,” he says, and that was just the start of the process streamlining. Also eliminated: machining. While CNC machining is common for metal parts made additively, DFAM considerations let GM avoid all machining in the production of this one. The teardrop shape of an otherwise drilled hole allowed it to be 3D printed accurately instead of machined, and conical support structures only delicately linked to the part allow these supports to break away by hand so that machining is not needed for support structure removal.

GM expects AM to play a much greater role in its production in the future. The company recently announced the opening of its Additive Industrialization Center at the GM Tech Center in Warren, Michigan. 3D printed production parts will be developed here, and 3D printed tooling will be made here to support the company's established manufacturing processes. (The Blackwing parts were not developed here; that work came before this facility.)

This part, and the others manufactured through 3D printing, are now teaching GM’s manufacturing teams the lessons the company will need to learn as AM advances to address larger quantities and an increasing share of the company’s production in the future. The lessons are real, and numerous. Shabbir describes them:

“We need to develop specifications on additive materials,” he says. “Who are our sources for material, how do we instruct them, and how do we validate and qualify the materials they provide?”

Then, particularly for a part like the bracket, “How do we design this so that it lines up with the parts adjacent to it in the assembly, and can we repeatably get this form without needing to machine it? Then, how do we evaluate and certify the performance of printed aluminum as an alternative to machined steel?” Modeling via computer aided engineering (CAE) in part promises to provide the answer. Therefore, he adds, “How do we apply CAE to generate materials data for AM?” The answers learned for the Cadillac Blackwing parts likely will also apply to many other parts on other GM vehicles in the future.

This is fitting, he says, because “Cadillac, as a brand, has always been at the forefront of our innovation.” Its place at that forefront today — in this case, leading innovation in manufacturing — is something the car signifies with the stratified lines on its shift knob.