In the midst of COVID-19, additive manufacturing (AM) was thrown into the spotlight as it came to the rescue of under-supplied hospitals and healthcare facilities to quickly produce mass volumes of everything from personal protective equipment (PPE) to breathing apparatuses. For all of the trailblazing initiatives that additive manufacturing has enabled, the associated post-printing processes have been equally prohibitive for the progress of the industry.

One of the most challenging aspects of this step is effectively dealing with the fine chemical differences between the model material itself and the actual uncured resin to be removed. To successfully clean a part, manufacturers must find the best solution to target the non-polymerized oligomers of the resin, but not the polymer itself. Harsh chemicals like isopropyl alcohol (IPA) or tripropylene glycol methyl ether (TPM) are often used to remove excess resin. These chemicals can strain an operation’s safety initiatives, while frequent chemical change-outs simultaneously lead to a significant amount of downtime.

On the technical side, cleaning resin 3D printed parts is frequently performed with handheld tools like squeeze bottles, brushes and dunk tanks. These laborious methods are not only tiresome for technicians, but they can burgeon into bottlenecks that cost operations time and money which could be better spent on more value-added tasks.

While there is a large selection of mechanically-driven technologies designed to lessen the resin removal burden on operators, most options are not tailored for additive. These general postprocessing solutions often result in unfinished parts and lengthy cycle times, and frequently incorporate the use of harsh chemicals.

Attleboro, Massachusetts-based Empire Group has been enabling clients with faster prototype delivery times and increased productivity since 1999. However, when it came to finishing 3D printed parts made via stereolithography, Empire Group faced bottlenecks that prohibited the company from finishing parts at optimal speeds. As such, resin removal with solvents and manual labor escalated into a more critical issue as the company grew. While the service bureau’s workload and number of printers increased, it was obvious that without an automated solution, the amount of time dedicated to resin removal would as well. 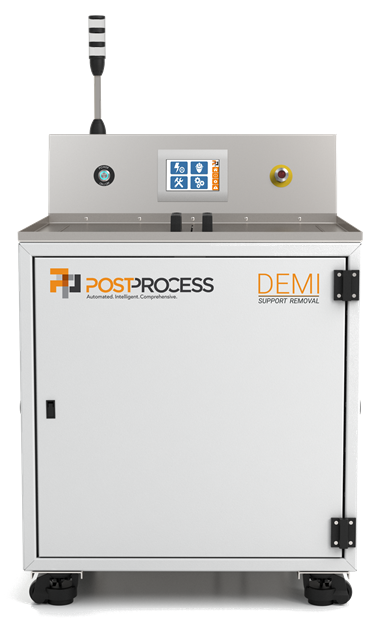 Now that they are able to handle resin removal in a fraction of the time and spend less downtime on chemistry change-outs, Empire’s engineers and technicians can direct their energy on augmented tasks such as quoting out orders, performing maintenance, build tray optimization, and more. The software-driven solution has reduced stereolithography resin removal times by at least 50% on average, and sometimes more.

Founded in 1989 but new to additive manufacturing as a whole, Swedish industrial design agency Splitvision found instantaneous improvement in the process efficiencies, mechanical properties and fine feature details of its prototypes with the implementation of a 3D Systems Figure 4 Digital Light Processing (DLP) printer in 2019. Previously, Splitvision always made prototypes from polyurethane (PU) foams or solid plastic materials to evaluate form and ergonomics, which was traditionally done using hand tools. To effectively develop more detailed prototypes, or models with high cosmetic demands, the only choice was to outsource.

The DLP printer remedied these efficiency and outsourcing issues, but without an automated postprocessing system, Splitvision encountered many bottlenecks in its new additive workflow. Specifically, it was very tedious to fully clean the resin off of the fine feature details of design casings (one of the company’s most frequently produced parts) with a traditional solution like IPA, in turn driving up unit costs and impairing business. The work environment was also compromised by the strong smell of the solvent, and by the weight of lingering concerns surrounding its flammability.

An automated postprocessing solution from PostProcess functioned not only to streamline the resin removal process but improve workplace safety overall. The PostProcess detergent has a high flash point, meaning it will not ignite from a spark at the working temperature of the machine, alleviating fire hazard worries. Apart from being more pleasant to work with, the detergent seems to be especially efficient at dissolving the uncured DLP resin. Even in parts with deep narrow features, the cycle time is never more than 10 minutes.

With this system, Splitvision has also found that it is possible to leave the support structure intact on parts during UV post-treatment of the DLP resin. The presence of support structures during post-treatment greatly lessens the chance that part geometries will warp or change in any way during the curing process, helping to ensure high part quality and design consistency. Leaving support structures had not been possible with traditional IPA cleaning, as it was too difficult to get rid of all uncured resin behind the supports. Splitvision is now able to offer printed parts at a reasonable price, especially when printing multiple items in one run.

Marc Farfaglia is the technical collaboration partnership manager at PostProcess Technologies, a global provider of automated post-printing solutions for industrial 3D printing. Holding a degree in chemical engineering, Marc began his career working with advanced composites as a development engineer at CarbonOne Technologies.