The side-by-side product offering from Cincinnati Inc. and Multiax America aims to provide high-throughput AM production for large parts under one roof.
#largeformat #polymer #postprocessing

The key difference between “3D printing” and “additive manufacturing” (AM) is that the latter incorporates processes and considerations outside of the actual layering or sintering or curing of materials to make a final 3D-printed part. As more industries come to rely on additive manufacturing to produce discrete parts, we can expect to see post-processing technologies incorporated into — or adjacent to — industrial 3D printers themselves.

This end-to-end product offering is the driver behind a new partnership between Cincinnati Incorporated and Multiax America — two build-to-order machine tool manufacturers that, respectively, operate in the 3D printing and CNC machining space.

In the world of industrial 3D printing, Cincinnati Inc. is well known for its Big Area Additive Manufacturing (BAAM) machines — the type of machine famously used to 3D print a car over the course of two days at IMTS in 2014. Cincinnati Inc.’s BAAMs are large, gantry-style extrusion-based machines capable of printing thermoplastic parts up to 20 feet long and 7.5 feet wide at a rate of 80 pounds per hour.

As a company that produces custom-designed CNC machining centers that measure up to 40 feet long, Multiax America is equally experienced producing large parts, primarily via five-axis machining for the aerospace, automotive, boat and wind industries.

Before the partnership was formally announced, I had a chance to talk to Joe Bockrath, Multiax America’s strategic sales and marketing specialist, as well as Alex Riestenberg, additive manufacturing product manager for Cincinnati Inc. (often referred to as CI). While the two companies hope to eventually introduce automation and other complementary technologies into these side-by-side 3D printers and machining centers, the initial phase of the partnership simply means that Multiax America now offers Cincinnati Inc.’s BAAM machine, and Cincinnati Inc. now offers the Multiax line of five-axis routers. Riestenberg and Bockrath say that together the two machines represent a turnkey solution for customers, saving time and money while also providing customers access to the service and support of two expert manufacturing companies.

“CI offers different size BAAMs based on the customer needs,” Riestenberg says. “And Multiax also has a pretty wide range of machining centers. So at the beginning of this partnership, what we'll be offering customers is basically a package — our BAAM machine along with a Multiax router, sold together but as two separate machines that complement each other very well. The exact size and configuration of those machines will be up to the customer.”

Multiax America produces custom-designed CNC machining centers that measure up to 40 feet in length for the for the aerospace, automotive, boat and wind industries.

Writers for Additive Manufacturing and our sister publication, Modern Machine Shop, have written extensively about the necessary relationship between additive manufacturing and CNC machining. Recent examples include articles that explored Lincoln Electric’s acquisition of Baker Industries, a subcontract manufacturer that primarily serves the OEM and Tier-One aerospace and automotive sectors. In recent years Lincoln Electric has poured considerable resources into additive manufacturing, including a new, additive-focused business unit called Lincoln Electric Additive Solutions. This company uses wire arc additive manufacturing processes to print several large parts such as tooling for composite aerospace components — a process that includes the challenge of finish machining these large parts. The acquisition of Baker Industries — which operates one of the largest five-axis machining centers in the United States — was Lincoln’s answer to this challenge.

While similarities exist between aspects of that story and the new partnership between Cincinnati Inc. and Multiax America, the underlying premise (as well as the materials — metals versus thermoplastics) is fundamentally different.

High-value applications for BAAM machines include tooling and molds for the aerospace and automotive industries, and Riestenberg says that 99% of these 3D-printed parts require finish machining in order to achieve necessary tolerances and surface requirements. But while Lincoln Electric Additive Solutions sells a service (providing parts) CI and Multiax America will be selling the technologies (printers and CNC machines) needed to create parts.

While the partnership between CI and Multiax America is brand new, both Riestenberg and Bockrath believe that in the future the two companies may decide to enhance automation and communication features between the respective machines being sold together. But simply having 3D printing and machining capabilities side by side could offer immediate, significant advantages to customers — namely the ability to provide high-throughput AM production under one roof.

Bockrath says that due to their large scale and highly customizable nature, Multiax machines are ideally suited for BAAM parts. “Our basic machine is a five axis, so we can usually get to every feature on a part right away, including all the complex curves and vectors that we need to drill holes into and surfaces that require finishing,” he says. 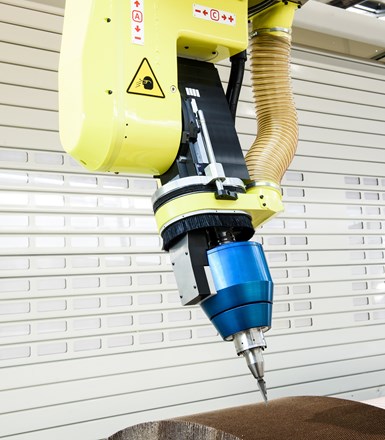 An example of ultrasonic machining, in which the cutting tool is driven through high-frequency oscillation in the Z direction. Ultrasonic machining thermoplastics with blades uses less force and allows for the fast machining of complex shapes such as honeycomb lattices.

The company offers open or fully enclosed machines and a wide range of spindles with speeds up to 40,000 rpm. The company also offers ultrasonic machining (in which the cutting tool is driven through high-frequency oscillation in the Z direction) using blades rather than milling cutters or drills. Bockrath says that ultrasonic machining with cutting blades uses less force and allows for the fast machining of complex shapes such as honeycomb lattices.

“We’ve had a goal to partner with a leading CNC machine manufacturer for some time,” Riestenberg says. “Multiax is that manufacturer. Our open-book relationship will make both of us stronger and will ultimately better serve the customer.” Plans are in motion to set up a Multiax P Series moving bridge machine alongside a BAAM machine at the CI showroom near Cincinnati, Ohio, to allow customers to look at the side-by-side setup in-person.