A $1.5 Million Dive into the Melt Pool

One of the first test samples introduced to Auburn University’s new, $1.5 million customized digital radiology vault and specialized additive manufacturing (AM) system was a small, 3D-printed tooth cap for service dogs such as those employed by police and military units. Because of the stressful nature of this work, teeth grinding is an acute problem for many of these dogs — a problem that can be remedied by CT scanning the animal’s teeth, converting those scans to CAD models and printing custom tooth caps. 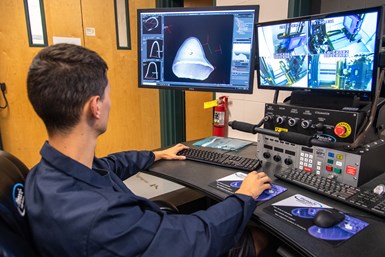 An Auburn researcher views a CT scan of a 3D-printed canine tooth cap from the PSX Macro CT.

Using the new system, Auburn University researchers discovered an unusual correlation: The surface roughness on the inside of the cap, as well as the size of the defects detected by the CT scan, directly related to external surface roughness. It was an unexpected finding, and the researchers plan to publish their results soon.

If this seems like a novel application for an investment of this complexity and cost, Auburn researchers say that the work is part of the initial calibration process for what may be the largest system of its kind on the entire planet — a system that has been designed and created to address a key bottleneck holding back metal AM technologies: understanding and controlling the complex heat and mass transport phenomena taking place inside the melt pool during the laser sintering process for powder bed fusion 3D printing.

A look inside the vault of Auburn University’s new PSX Macro CT, a $1.5 million system that can scan 3D-printed metal parts as well as the printing process itself in real time.

Auburn University’s professor of materials engineering, Bart Prorok, says that characterizing the additive process will allow for the creation of industry standards for 3D-printed mission critical parts for the aerospace and aviation industries — and break open the floodgates for production metal 3D printing.

Acquired through a grant from the National Institute of Standards and Technology, Auburn’s new system is called the PSX Macro CT, named by the company that created the customized digital radiation vault, Pinnacle X-Ray Solutions. The system is, put simply, a CT scanner capable of not only scanning 3D-printed metal parts, but also scanning the printing process itself in real time. At 9 feet by 12 feet, the vault is large enough to house custom metal 3D printers built by Auburn researchers, as well as two separate X-ray sources: a 225 kilovolt (kV) micro focus tube and a high energy 500 kV tube. 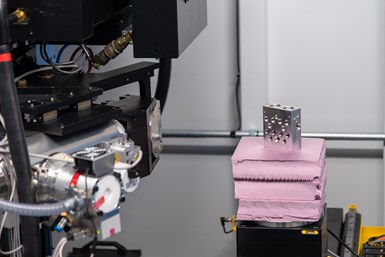 A 3D-printed metal part ready for scanning inside the PSX Macro CT.

Also housed inside the vault is a tensile testing rig that has been modified to allow for full-field imaging. “You might think, well, anybody can put a tensile tester in there,” Prorok says. “But when you're doing X-ray CT and rotating and taking images every degree for 360 degrees, you just can't install a simple tensile testing rig because of the thick metal support arms that the X-rays won't penetrate.” The result would be a series of degrees for which no data is collected during the scan. The solution? Modify the tensile axis to spin and move one degree at a time as the support arms remain stationary. “I think this may be unique,” Prorok says, “and it gives us a suite of capabilities that you can't find almost anywhere else.”

The ultimate goal of characterizing the powder bed metal 3D printing process is to go deeper, literally, into examining phenomena inside the melt pool, in real time. For example, how deep is the laser penetrating? How deep is the melt pool? How are solidification dynamics and transport phenomena occurring beneath the surface? Current melt-pool monitoring typically allows for examination of these dynamics at the surface level only, Prorok says. “But with this unit and the X-ray CT,” he adds, “we can watch from the side and begin to get the depth profile and see the dynamics of the melt pool and solidification occurring. We can then start adding more information to the parameters that we are printing with, including their relationship to the transport phenomena and, eventually, the microstructure and the properties of the finished part.”

Characterizing in-situ dynamics within the melt pool — dynamics affected by process parameters including laser power, speed, gas flow, etc. — would be useful not only for additive machine OEMs but for operators and end-users of parts. “[Metal laser powder bed] 3D printers are for the most part very similar in how they work,” Prorok says. “There are some subtle differences here and there, but what’s truly important when you're producing parts is understanding the parameters you're applying and the impact those parameters have on the final part. We have to make the linkages between those parameters to obtain the properties that we want the component to have.”

The part above as it appears onscreen after being scanned inside the PSX Macro CT.

It’s no fluke that Auburn University’s $1.5 million grant comes on the heels of a $5.2 million contract awarded by NASA to the university’s National Center for Additive Manufacturing Excellence. The contract is a three-year investment in Auburn’s public-private partnership with NASA that established the National Center for Additive Manufacturing Excellence two years ago. A key goal of the center is to evolve light-weight, large-scale 3D printing techniques for the development and manufacturing of regeneratively cooled thrust chamber assemblies for liquid rocket engines such as the RS-25, the core engine that will enable a return trip to the moon in 2024.

Prorok says that what sets the PSX Macro CT apart is the system’s high-energy X-rays that can take advantage of the vault’s voluminous size to examine large printed parts. A large chamber is necessary to manipulate large parts, and a high-energy X-ray is necessary to punch through thick layers of metal. These two capabilities also correlate to the building process of large parts, Prorok says, since the larger machines necessary to build them typically have powerful lasers that print faster than most industrial 3D printers. “Now we can begin to understand how process parameters affect those intermediate steps of transport phenomena and microstructure properties,” he says. “And we can provide that information for rapidly to those who need that capability without them having to spend a million and a half dollars on an instrument and training people to do it.”

Not that just anyone could replicate the PSX Macro CT. It turns out that the biggest challenge in building the system wasn’t the custom-built 3D printers, the high energy X-ray tubes or the modified tensile testing rig. It was the challenge of providing enough lead shielding to stop 500 kilovolts of X-ray radiation from escaping the vault. How much lead does that take? 30,000 pounds. And as engineers from Pinnacle and Auburn learned, you can’t simply plop 30,000 pounds of lead down anywhere. Auburn’s facility personnel were brought in to locate potential areas on campus that contained a suitably thick slab of concrete or solid bedrock beneath the surface.

In other words, to study microstructures, one of the first steps was to support a massive weight.