DustRam did not start out as a manufacturer. But thanks to 3D printing, the company now makes many of its own products in house, in addition to parts for customers.
#polymer #assemblyconsolidation

The DustRam (the large black piece seen on the front of this chipping hammer) and some other accessories as seen at RAPID + TCT 2019. The company’s complete dust-free flooring removal system includes 100 individual components, at least 60 of which are 3D printed.

When Jack King invented the DustRam, he didn’t know he’d end up here. The device, which fits around a chipping hammer to capture dust during flooring demolition, was inspired by the needs of King’s existing business, Arizona Home Floors, a flooring removal company with frequent use for such a product. 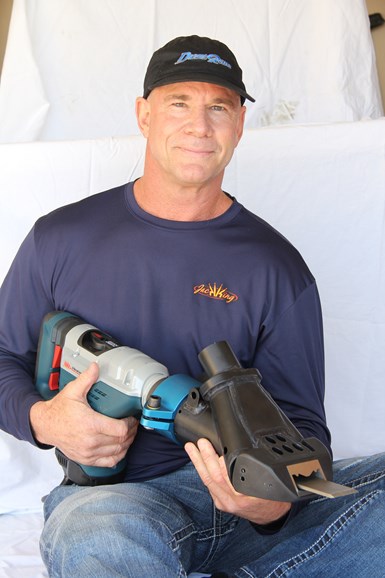 Jack King holds a chipping hammer equipped with the original DustRam, made from machined aluminum and tool steel. Obtaining this metal version of the product used to take up to five months. Now, the four nylon parts that make up the plastic version can be 3D printed using Multi Jet Fusion, postprocessed and assembled in less than 24 hours.

But developing the DustRam took King on an unexpected journey. Inventing the device also meant figuring out how to have it manufactured. His original design made from aluminum and tool steel was contracted out for machining, TIG welding, heat treat and wire EDM. But when the question arose of making a lighter, cheaper version out of plastic, purchasing the necessary mold tooling proved cost-prohibitive.

The plastic version of the DustRam eventually came to be 3D printed, a cost-effective way of making this product in small batches. But selecting 3D printing for this work didn’t just give King a method of manufacturing the device; as he told me in a 2017 interview, “I’m my own manufacturer now.” Purchasing a 3D printer was a turning point; King was no longer just the developer (and user) of this product, but the manufacturer as well.

DustRam LLC recently reached another turning point, as its product portfolio has grown to encompass a complete system of equipment for flooring removal. To keep up with demand, production has moved from an FDM system to the HP 4200 Multi Jet Fusion (MJF) platform. This move is enabling the company to not just continue making its own products even as sales and range of these products expand, but to now also manufacture other parts for customers beyond Arizona Home Floors.

The DustRam is part of a larger package of accessories and systems for “dust-free” flooring removal. Arizona Home Floors uses this equipment itself, but also sells the package to qualified flooring contractors across the United States. The full system consists of more than 250 components, including accessories for chipping hammers and grinders as well as a proprietary vacuum system.

3D printing initially provided a way to avoid injection molding on the DustRam, the namesake accessory, originally constructed from machined aluminum and tool steel. After a 3D printed nylon prototype easily survived months of use, however, 3D printing became the production method for a lightweight version of the device. Today the nylon DustRam and about 60 other parts for the dust-free system are 3D printed in nylon PA12 on the HP 4200 Multi Jet Fusion system, in addition to 30 or so assembly fixtures and other tooling.

When the DustRam was manufactured out of aluminum and tool steel, it could take up to four months to receive the finished product. Injection molding was never a real option for this product, either, because of the mix and low volume of parts required.

“You can’t do that with an injection mold, and it costs a lot to try it at all.”

“It’s bad enough when you have to get an injection mold just to build a single part,” he says. “Plus, we’re constantly tweaking the parts and doing things on the fly. You can’t do that with an injection mold, and it costs a lot to try it at all.”

The dust-free system now includes just a few non-3D-printed, machined aluminum parts. “Those are the parts that absolutely have to be metal,” King says. “Most of my parts don’t have to be. They can be nylon.”

A different view of a Bosch chipping hammer equipped with the DustRam, ExoRam and SkiRam, all products built primarily from 3D printed nylon parts. Metal is only used where necessary. The DustRam tools won third place in AMUG’s 2019 Technical Contest, Advanced Concepts category.

Speed Is the Key

The benefits from 3D printing the bulk of these parts include easier design changes, assembly consolidation, cost savings and a lighter final product. But the biggest benefit might just be time.

Rather than waiting months for machined parts, or even the several days that it took to make the DustRam with FDM, Multi Jet Fusion has dramatically reduced production time. King says that up to 100 parts nested into the MJF build envelope can be built within 17 hours.

Following printing, the build unit is cooled and unused powder reclaimed from the build chamber. Remaining excess material is removed from the parts either manually or with glass bead blasting. Then, parts are soaked in a dye tank for about 4 hours before being blotted dry. From there, some pieces receive additional work such as post-machining or coating and are then ready to be assembled or shipped.

“Something that would take two years to do previously you can do in two weeks.”

New product development is shortened as well, with 3D printing allowing King to make best use of his role as both manufacturer and user. New designs can be passed to Arizona Home Floors employees for field testing and feedback can be gathered near instantaneously.

“You can go through eight iterations in the space of two or three weeks,” King says. “We can build something, take it out to the field, test it, see if it breaks, if it’s too small, then change the CAD model, reprint another one, take it back out to the field. Something that would take two years to do previously you can do in two weeks.”

DustRam even manufactures accessories for the users of its flooring demolition equipment, like KneeRam pads to protect an operator’s knees while kneeling.

The Path to Production

For a small company like DustRam, inventories, production scale and even facility floorspace all have to remain small. The speed of 3D printing fits these needs, making it possible to manufacture parts in the quantity and mix required as orders come in.

“I used to have tons of inventory on the shelf,” King says. “Now if I’m getting low I just print more, in whatever mix I need. If I want three of these and two of those and one of those, it doesn’t matter, as long as I can fit them in the build chamber. The print takes ﻿the same amount of time whether it’s filled with 98 parts or three parts.”

King currently owns just one MJF printer and two swappable build units, which is more than enough to maintain the business at the moment but also would allow production to scale for future growth. “As my company grows and there’s more demand for my product, I can start using it more often,” he says. “I could get another build unit and be printing up to 24 hours a day, seven days a week.”

“There’s no way I’d be manufacturing without it.”

To fill excess capacity on the Multi Jet Fusion system, DustRam has recently started taking 3D printing orders for external customers. Making parts for others is something King would never have considered previously when capacity was at a premium on the previous 3D printers.

“Now, not only can I keep on top of my inventory without any sweat, I also have time to print for other people if I want,” King says. “Without a 3D printer there’s just no way I could afford it. There’s no way I’d be manufacturing without it.”

Learn more about the DustRam and how 3D printing has changed Jack King’s business in this episode of The Cool Parts Show, a video series from Additive Manufacturing. WATCH