3D Printed Prefab Homes, Made from Composite and UL-Certified

Mighty Buildings’ 3D printed homes are built from a durable thermoset composite off-site and dropped into place complete. The company is the first to have earned UL certification for 3D printed buildings. Photo Credit: Mighty Buildings

While tastes have changed and materials have advanced, most homes today are still constructed the same way they were decades ago: a wood frame, enclosed by drywall and finished surfaces, built on site with a large amount of manual labor.

“You could take someone from a 1900s build site and drop them on a site or into a prefab factory today, and it would be the same,” says Sam Ruben, co-founder and chief sustainability officer of Mighty Buildings. “They might be using a nail gun instead of a hammer, but they’re still using a nail.”

To be clear: A nail still works. But it is becoming increasingly less desirable to build residential homes the conventional way. From the builder’s perspective, the process is long, complex, costly and generates waste that must be properly disposed of. Each new home is subject to the local building code and zoning restrictions, the size and shape of the lot, and the tastes and requirements of the owner. Meanwhile the construction industry is facing a skilled labor shortage, making it difficult to find the workers needed to produce new houses.

From the homeowner’s perspective, there are other hurdles to be overcome. Housing is expensive, especially in high-priced locations like California, and building a new construction means long lead times and jumping through regulation hoops on top of the financial implications. Existing houses are not necessarily the right square footage for current market demands, Ruben argues, pointing to recent trends toward “right sizing” housing and a lack of available modestly sized starter homes. There is also a desire from consumers to occupy houses that are more sustainable to run and maintain.

With all this in mind, Mighty Buildings recently emerged from stealth mode with its mission to change the business of home construction. Rather than wood and nails, its homes are made from thermoset polymer composite that can be finished to the desired aesthetic. Instead of building on-site, the units are prefabricated in the company’s Oakland, California, factory and dropped into place. The manufacturing process is faster, more automated and cheaper compared to traditional new construction, plus produces less waste and results in a more energy-efficient home.

With large-format 3D printing, Mighty Buildings has developed a process for constructing homes that is far more automated than traditional methods. With the coming introduction of a new, fiber-reinforced material, the printer will be able to create overhangs without the aid of the plywood and steel supports shown here. Photo Credit: Mighty Buildings

There’s been no shortage of 3D printed building news over the last few years, but Mighty Buildings has taken a different approach than most, choosing prefabrication versus building on-site and polymer composite rather than concrete or more conventional building materials. The technique isn’t hypothetical, either; while in stealth mode, the startup partnered with Underwriters Laboratories (UL) to work through the regulatory logistics of actually building homes this way. The company is the first to achieve certification under UL 3401, a new standard for 3D printing building construction. Any partially or fully 3D printed home still requires the approval of local code authorities, but the UL 3401 evaluation provides the data necessary to determine if a 3D printed piece or structure complies with a given building code.

Among the factors assessed by the standard are the materials and 3D printing equipment used; in Mighty Buildings’ case, these are both proprietary. Its prefabricated homes are built from an advanced thermoset composite called Light Stone (similar to the Corian material commonly used for countertops, Ruben explains) with a large-scale 3D printer specially designed to apply it. In contrast to the thermoplastics used in most deposition-style printers, a thermoset polymer cannot be remelted after it solidifies; its material properties are fundamentally altered as it cures. Thermosets are generally stronger and more heat resistant than thermoplastics as a result, but trickier to print with good layer adhesion. Mighty Buildings’ Big-G Printer meets this challenge with two UV lights on the print head that control the curing process. See the printer in action below, building a part with an overhang:

“As the material is extruded it gets hit with a UV light which cures it partially, allowing it to support its own weight,” Ruben says. “That means we can do unsupported spans, freeform design and very organic shapes. But the really cool thing is that it doesn’t cure so fast that we don’t get complete cohesion between the layers. It’s still completely cohesive to the next layer, which means we get a full monolithic structure.”

The housing units Mighty Building has produced so far are single-story hybrids — 3D printed panels applied to a steel frame — but that will change with the next material iteration. The company is currently working on a glass-fiber reinforced thermoset polymer composite that will be as strong as steel, enabling the printing of multi-story buildings without the need for steel framing. Materials will be UL-certified for both indoor and outdoor usage, and can be finished with a range of textures and coatings, limiting the variety of different materials needed in each building. Finishing itself is automated, with printed pieces milled and coated via automated robotic cells.

“We can create structures with roughly 95% less labor, and we’re really focusing that human labor on the 5% that makes sense for them to do — the fine finishing, the detail work, the electrical work,” Ruben says. Looking to the future, “We want to create a whole new class of construction workers that get to work with cutting edge technology in a much safer environment than traditional construction. It’s going to be easier and less work per unit, but more work overall because of increased throughput.”

The Mighty Buildings process applies the same benefits to housing construction that additive manufacturing has brought to conventional manufacturing — a process that is digital, largely automated, and generates little to no waste. In fact, the company is exploring ways to reduce its waste even farther by recapturing the dust from finish milling and turning it back into 3D printing feedstock. Prefabricated homes can be installed with less impact on the surrounding environment as well; rather than clear a full construction site for weeks of building, Mighty Building’ prefab houses only require the pouring of a concrete foundation before the home can be delivered to the site complete.

However, “greener” construction doesn’t just describe the building process in this case. Houses made this way may also allow for more affordable and sustainable homeownership. Thanks to the automated build process and elimination of multiple finishing materials, Mighty Buildings says that its 3D printed prefabricated homes can cost up to 45% less than conventional on-site construction and 20 to 30% less than traditional prefab for comparable size and quality. (Current available configurations range from a 350-square-foot “mod” available for $115,000 to a 1,440-square-foot three-bedroom/two-bath “house kit” for $285,000.) 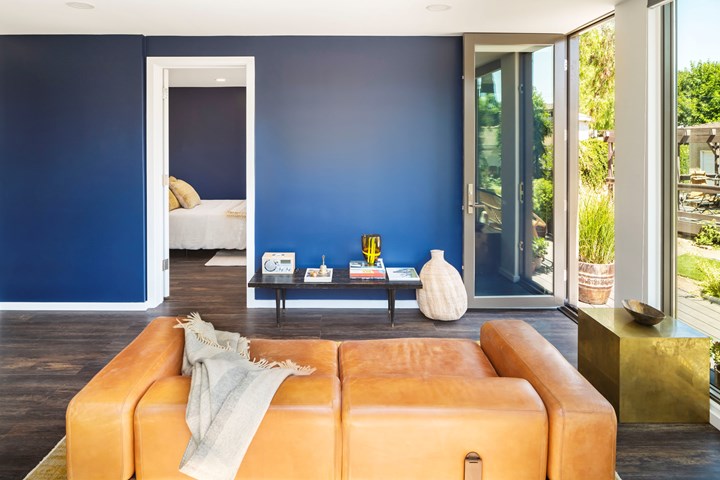 Unlike a traditional construction where additional materials must be attached to a frame, all of the surfaces in a Mighty Buildings home — floor, walls, molding, ceiling — can be 3D printed and finished to the desired aesthetic. Photo Credit: Mighty Buildings

Meanwhile, the design of the walls — 3D printed Light Stone lattice filled with insulation — makes them four times as insulating as concrete, Ruben says, which translates to reduced energy usage for heating and cooling the home over the long run. Additional optimization efforts are focused on reducing the energy consumed by lighting and other built-in systems.

So far, Mighty Buildings has installed two prefabricated buildings as accessory dwelling units (ADUs) in California, and has about 15 more in progress at its facility in Oakland. For now it is focused on providing these buildings in its preset configurations and selling direct to consumers in a turnkey package, but this isn’t the ultimate goal. Eventually the company hopes to function as a supplier to builders and developers, and to establish multiple small production facilities around the world.

“We don’t need to build bespoke factories; we can use existing warehouses near where the demand is...”

“A single production line can be set up in under 10,000 square feet,” Ruben says. “We don’t need to build bespoke factories; we can use existing warehouses near where the demand is to reduce logistic costs and transportation.”

Distributing manufacturing to strategic regions will also allow for easier collaboration with local developers. Starting in California — with the state’s stringent building codes, material regulations and seismic requirements — will ease the rollout to other states and eventually other nations. The company is also working to develop software that will allow it to accept third-party bespoke designs for production, expanding the variety of possible floorplans and aesthetics.

“We’re really excited about the across-the-board potential of addressing all the different ways that people want to live,” Ruben says. “When we have that software in place, this can be a design- and project-agnostic production system that can serve any market where it’s needed.”