Nitinol, a shape memory alloy of titanium and nickel, is the material of choice for arterial stents that need to return to their designed shape after movement. Researchers have now shown that it is possible to 3D print this alloy via powder bed fusion. Photo Credit: CSIRO

Placing a stent into a patient’s artery is a delicate operation, but one that depends on the mechanics of the device itself as much as the surgeon’s skill. Coronary stents used in the heart are inserted in a collapsed state wrapped around a balloon, which is then inflated to press the stent against the vessel wall; this expansion incurs a plastic deformation in the stainless steel or cobalt chromium stent, causing it to hold its final, open form.

Stents used to treat peripheral artery disease (PAD) have different requirements, however. These arterial stents are used to treat blockages outside the heart, in arms and legs, and therefore must be able to move along with the natural motion of these limbs. Shape memory alloys like nitinol that can deform and then repeatedly return to an expected state are ideal for PAD stents, but difficulty in manufacturing these implants has dramatically limited the variety available. Only a few lengths and diameters of off-the-shelf PAD stents are commonly manufactured.

Troubled by the lack of stent options but encouraged by the advance of metal additive manufacturing (AM), Dr. Arthur Stanton, a vascular surgeon in Australia, reached out to the country’s national science agency in 2017 with a question: Would it be possible to 3D print nitinol stents?

An arterial stent is essentially a wire mesh tube that functions as a scaffold to hold an artery open and restore normal blood flow in an area where plaque has built up. To serve this purpose for PAD, the stents must overcome two key challenges: insertion during surgery, and the ability to maintain the original shape over the long term. 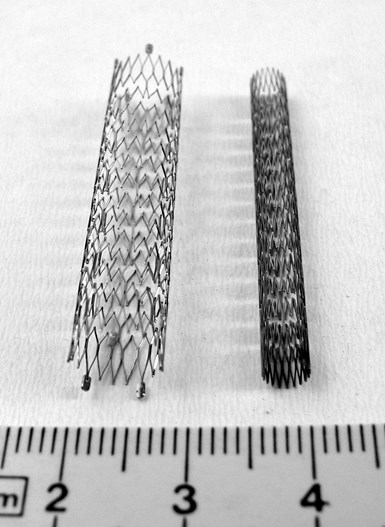 Manufacturing the stents from nitinol, a titanium-nickel alloy, solves both challenges at once. The material’s shape memory properties allow it to be compressed and placed into the artery, where it will expand to its full diameter without the aid of a balloon; those same properties allow the stent to return to its original shape again and again as the patient moves.

In the past, nitinol stents have been made from coiled, braided or knitted wire, but areas where the wire crossed itself increased the wall thickness. Today most are made from seamless nitinol microtubes which are laser cut into mesh designs to make them flexible; these laser cut stents require surface finishing via acid pickling or electropolishing to remove the heat-affected zone left by laser cutting and create a titanium oxide layer that resists corrosion and makes the devices more biocompatible.

While existing nitinol stents are a valuable treatment option for PAD, manufacturing them requires tooling and setup that limits the variety of geometries it is cost-effective to produce and keep in inventory. But by leveraging an additive manufacturing technology not inhibited by tooling constraints, Dr. Stanton saw a possibility to achieve new, novel and possibly even custom arterial stent designs better suited to each patient.

Fortunately, the CSIRO was up to the challenge. The Australian science organization employs more than 5,000 researchers across many disciplines, including additive manufacturing (AM), with metal 3D printing capability centralized at the Lab 22 Innovation Centre for Additive Manufacturing. Dr. Lathabai has been a part of CSIRO since 1990; with a background in metallurgy and material science, she is the organization’s lead scientist on powder bed fusion (PBF).

“That was the best process when it came to the stents because of the geometric accuracy,” Lathabai says. The strut diameters for these stents can be as small as 100 microns, making these “ultrafine” structures considering that metal powder for AM typically falls in the range of 15 to 45 microns in diameter. Still, she believed it would be possible to produce the stents with Lab 22’s Concept Laser M2 selective laser melting (SLM) machine provided CSIRO could overcome the hurdles with the nitinol material itself.

“The very first problem was just trying to source the powder,” she says. At the time, no major AM material supplier offered nitinol suitable for powder bed fusion, so CSIRO had to find one willing to make it custom. Materials company AP&C (like Concept Laser, now part of GE) produced the nitinol powder used for the study, and made it according to the ASTM standard for biomedical materials.

The difficulty in sourcing the material hints at the next challenge: Nitinol is not commonly used in PBF, so CSIRO had to scale a learning curve to print it effectively. The titanium alloy is about 55% nickel and this nickel content contributes to the material’s transformation temperature, the temperature that triggers the material’s return to its original, as-designed state. For these self-expanding stents, the transformation needs to occur at slightly less than normal body temperature, 98.6°F (37°C). To retain the nickel and keep the right material mix for this behavior, Lathabai’s team had to overcome an integral part of the SLM process: the laser.

“The nickel has a low vapor pressure compared to titanium, and it can actually vaporize under the laser,” Lathabai says. “If you lose that nickel and change that nickel-titanium proportion, your transformation temperatures change completely.”

In early builds the laser temperature was too high, resulting in the loss of nickel and stents that were too rigid at body temperature. The precise details of the solution can’t be shared here, but Lathabai’s team was eventually able to overcome the vaporization challenge with modified printer parameters and post-print heat treatment. The completed stents that have been made so far have also needed surface modification, both to smooth the rough finish left by PBF and to impose the same oxide layer common to laser-cut stents.

The 3D printed stents created by CSIRO resemble those made conventionally, with a mesh-like structure created by zig-zagging struts. The design, however, had to be created from the ground up for additive manufacturing. The 3D printable stents are designed for build success as well as ease of postprocessing. They are meant to be printed in a vertical orientation, and so each angle is no less than 45 degrees to avoid overhang and the need for supports. Of course, the goal is not to produce a one-size-fits-all 3D printable stent. CSIRO’s initial designs can be adapted to build stents in a variety of lengths and diameters, as well as new and patient-specific geometries.

Without tooling or setup, 3D printing via powder bed fusion can easily enable the creation of stents in just the right shape and size for a given patient. Photo Credit: CSIRO

“The design freedom offered by additive manufacturing should enable the customization of the nitinol stents to specific vessel diameters, but can also accommodate larger sized stents, cross branches and new shapes for proximal and distal vessels,” Lathabai says. “This also opens up the opportunity to do other things that you can’t with conventional laser cutting, like bifurcated stents. The normal procedure is to put in two different stents that have to match up and be covered properly, but by 3D printing we can actually build a bifurcated device in one piece.”

Lathabai and Stanton anticipate a possible future where stents could even be made on site at the hospital, with an additive manufacturing expert working alongside the surgeon. Standard medical imaging already allows for the measurement of a patient’s blood vessel dimensions, so it would be possible to use this data as the basis for custom implants.

So far, CSIRO has proven that it is possible to 3D print self-expanding nitinol stents and early tests suggest that they perform mechanically as expected. The GIF below compares a 3D printed nitinol stent to a commercial stent in a three-point bending test.

“Thus far, we have only done a limited amount of mechanical properties and durability testing,” Lathabai says, but adds, “We have shown that our 3D printed stents are as flexible and corrosion-resistant in simulated body fluids as commercial stents of similar dimensions.”

Stanton will continue to work with the CSIRO to develop the technology further and gain TGA and FDA approval. In the next phase of the project, Lathabai and her team will create a large number of stent samples and begin to conduct some of the nonclinical testing that will be needed for market acceptance.

Although CSIRO won’t be involved in ultimately producing these stents, Lathabai expects that the information gleaned from this project will inform other additive manufacturing research. Other applications for 3D printed nitinol might be found in industries like space, where the material’s composition and transformation temperature could be manipulated differently to create components like actuators, for example. The work might even benefit research into other kinds of materials not typically 3D printed with PBF.

“What we have now learned to do with nitinol, we are very confident that we could do with other alloys,” Lathabai says.