Emergency authorization from FDA allows for use of device permitting four patients to use a shared ventilator. HP involved in mass production via additive manufacturing.
#polymer #covid-19

Prisma Health, a not-for-profit health company administering 18 hospitals in South Carolina, announced it has received emergency use authorization from the U.S. Food and Drug Administration (FDA) for a ventilator expansion device allowing a single ventilator to support up to four patients at once during times of acute ventilator shortages such as those being seen and anticipated with the COVID-19 crisis. 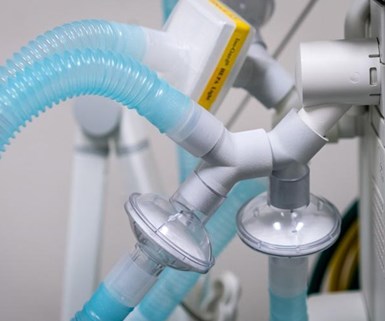 The new 3D printed VESper device for expanding ventilator capacity is the Y-shaped fitting near the center of this image. Photo: Prisma Health.

Stephanie Hendrixson and I discussed emergency research and development efforts around devices to "split" ventilator tubes so multiple patients can share a single ventilator in a video posted yesterday. This is a controversial move that would not be contemplated in a normal medical situation.

The new device, which the company is calling "VESper," is a Y-shaped fitting for ventilator tubing that allows for appropriate filtering of bacteria and viruses in the tubing, the company says.

The device will be mass-produced via 3D printing. The announcement from Prisma Health named HP as its manufacturing partner. HP is the developer of 3D printing technology specifically aimed at scale production. (Not the case with all 3D printers. Examples of manufacturers using the HP platform for production are here, here and here.) The Prisma announcement cited HP’s Digital Manufacturing Network, a distributed network linking 3D printers in different locations, as a resource able to allow production to quickly scale up.

However, 3D printing specifications will also be made available for producing the device on 3D printers outside this network. Hospitals can register to receive these specifications at prismahealth.org/VESper.

Browse AM by Topic