An experiment resuming in 2022 at CERN’s Large Hadron Collider (LHC) will be better able to detect the paths of particles thanks to efficient cooling delivered by metal 3D printed tubes.
#metal

The Big Bang theory of the origin of the universe posits that immediately after this event, there should have existed equal amounts of matter and antimatter. Yet the observable universe appears to consist almost entirely of matter, and scientists have succeeded at producing antimatter with particle accelerators only in small quantities. Is there an imbalance between the two, and if so, why? What exactly happened in that fraction of a second after the Big Bang?

Nikhef, the Dutch National Institute for Subatomic Physics, seeks to help answer these questions through its participation in the LHCb experiment. Part of the CERN Large Hadron Collider (LHC) in Geneva, Switzerland, this experiment measures the decay of the “beauty” or b-quark by capturing both the ordinary b-quark and its anti-b-quark corollary as they are created through collisions inside the particle accelerator. The LHC is currently closed for maintenance, but when it reopens next year, the LHCb detector will be equipped with an upgraded tracker better capable of capturing these particles; its improved performance will be at least in part the result of a new cooling solution for this instrument made possible by metal 3D printing.

The LHCb is one of seven detectors attached to the LHC. It is made up of 10 or so different subdetectors that capture a variety of information about particle collisions. As explained on the Nikhef website, “In a way, detectors are microscopes; the smaller the details researchers want to see, the larger the microscope and its lenses need to be.” The difficulty is that larger and more sensitive instruments run hotter, and that heat introduces “noise” that interferes with observation. Capturing clear images requires that these instruments be kept cool.

The SciFi (“scintillating fiber”) tracker on the LHCb experiment uses optical fibers that emit light when a particle interacts with them. The bars made by 3D Systems will cool the silicon photomultipliers (SiPMs) that converts this light to electrical signals. Photo Credit: CERN

This was the challenge facing Antonio Pellegrino, a leader of Nikhef’s scintillating fiber (SciFi) tracker project, a new tracking device for LHCb that will reveal the path of particles in the accelerator. “In order to see these photons, you have to use a very large amplification but it also amplifies whatever background there is,” Pellegrino says. “The way to go around this is by cooling down the camera. If it is sufficiently cool, the background noise is reduced significantly and we can see what we want.”

The specific piece of the LHCb experiment that must be kept cool is the photon detector strip, which runs about 140 meters along a portion of the Large Hadron Collider. “The photon detector chips on this strip are very similar to the chips that you have in your camera phone, just a lot more sensitive,” Pellegrino explains. If kept sufficiently cool — about 40°C — the device is capable of detecting individual particles that manifest themselves as very faint light.

Pellegrino’s team at Nikhef began working on a cooling solution for the photon detector strip more than 3 years ago. These cooling bars needed to fit into a very limited space and maintain their flatness along the length of the detector strip. Thin walls were desirable to minimize the amount of material between the surface and the carbon fluoride coolant, but the bars would also need to withstand pressures of at least 7 bar without leakage. On top of these functional requirements, publicly funded Nikhef also needed to find an economical solution that would be durable over the long term.

The organization developed a cooling solution it believed would work, but the design would have been too expensive and complex to produce conventionally. Rob Walet, the head engineer on Pellegrino’s team already had some familiarity with polymer 3D printing, and after surveying a number of metal 3D printing options, decided to collaborate with 3D Systems’ Application Innovation Group, which has a Customer Innovation Center located in Belgium.

When Pellegrino’s team brought the design to 3D Systems, the request was simple: “This is what we want. Is it possible?”

3D Systems was confident about its ability to 3D print the cooling bars, but it took some development to take the design from “functional” to “3D printable.” Nikhef and 3D Systems collaborated to refine the design through FEA, physical prototypes and testing. Each bar contains three channels running in parallel; the multiple channels create more surface area and greater turbulence for better cooling. The tubes are also designed to flex as the material expands and shrinks; with metal 3D printing it was possible to essentially build a “spring” into each part without any additional work or assembly.

Nikhef and 3D Systems knew that the final bars would be produced in metal, but selecting the right material ultimately became dependent on the design requirements. After prototyping the geometry in stainless steel, 3D Systems found that it would not be possible with the print parameters available at the time to achieve the desired thin walls while guaranteeing leak-free operation. Rather than settle for thicker walls and reduced cooling capability, the collaborators changed the material to LaserForm TiGr32 (A), a 3D Systems titanium alloy developed for dental, medical and technical applications.

“The weld pool for titanium is quite stable during the print process, and laser parameters were very well-developed for the material at the time,” says 3D Systems application engineer Thomas Verelst. These factors enabled 3D Systems to achieve the desired wall thickness of just 0.25 mm. Titanium can also be welded, a requirement for the final assembly of the cooling structure.

Prototyping to test the design iterations and material options quickly revealed that 3D printed titanium would be capable of delivering the final cooling bars. But getting to production was by no means fast or easy. With each iteration made by 3D Systems, Nikhef performed months of testing to ensure that the parts would be leakproof and durable over the long term. Manufacturing the long, thin parts was another challenge.

“We had to achieve a very long part with 50-micron flatness,” Verelst explains. “We generally mill these kinds of faces, but here that was not an option because the wall thickness was so thin. The print process itself has some variation, so clamping the part and milling it might create sections that are too thin. The risk was too high with regard to leakages. We had to get that flatness within specification without milling postprocessing steps.” 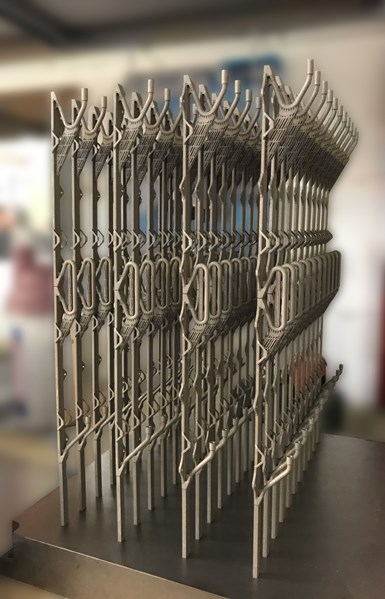 To avoid introducing leakage through their thin walls, 3D Systems knew it would not be able to machine the cool bars into tolerance. The company dialed in print parameters and adjusted for deformation to achieve the flatness required. Photo Credit: 3D Systems

In addition to flatness challenges, the cooling bars also experienced shrinkage defects in some areas of the functional cooling surface. “Such ‘steps’ in the cooling surface were problematic for the cooling performance, so they had to be removed by countering the actual deformation in the CAD,” Verelst explains. “After a few cycles, the steps were removed and the lines barely visible.”

A 3D Systems DMP Flex 350 direct metal printing machine was ultimately used for production. For the greatest chance of success, the 263-mm-long cooling bars were 3D printed vertically, which allowed for many parts to be packed onto a build plate and minimized the need for support structures. Each bar has supports in just two places, which are easily removed, Verelst says. Parts were stress relieved after 3D printing and removed from the build plate with a wire EDM; compressed air forced through the tubes cleared any loose powder.

3D Systems produced more than 300 cooling bars in total, which have been validated by Nikhef and are currently being installed at the Large Hadron Collider. “Already half of the bars have been connected to the final cooling system,” Pellegrino told me when I spoke with him in January. Being able to print long sections of cooling bars as a single assembly limited the overall part count for the cooling solution and the need for joints, reducing the risk of leakage. The final 3D printed cooling bars are expected to last a minimum of 10 years based on stress testing.

Experiments utilizing the SciFi tracker are set to begin next year in 2022, and Pellegrino is hopeful that this instrument will help to reveal new information about matter and antimatter. “This is fundamental research,” he says. “It is so important because it affects the way we think about our universe and about physics. That’s the reason we set up the experiment in the first place.”